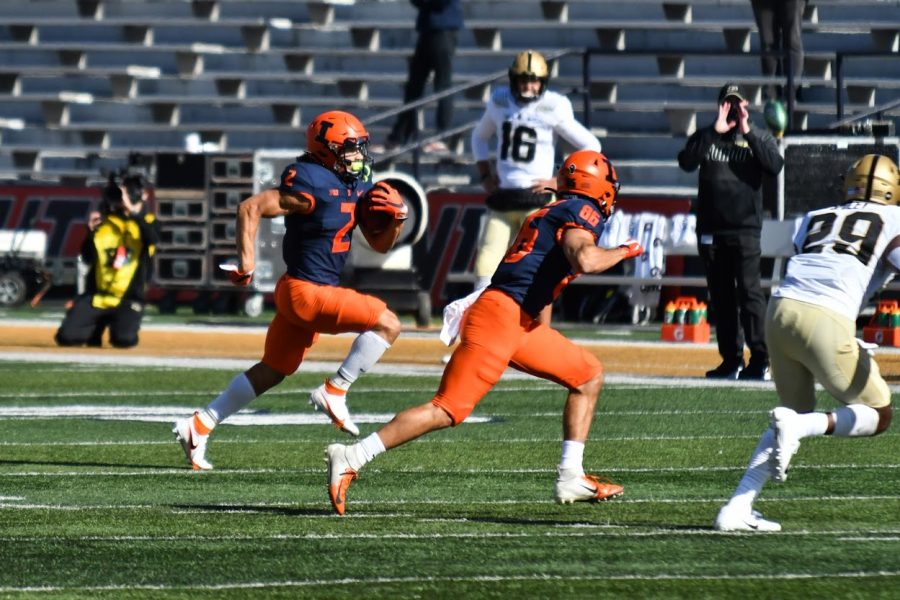 Illinois running back Chase Brown finds an opening during the game against Purdue on Oct. 31.

The Illini will look for its first win of the season this Saturday when they travel to Piscataway, New Jersey, to take on the Rutgers Scarlett Knights at noon.

Last year, Illinois was able to defeat Rutgers 38-10 after a tied 10-10 game at halftime. The Illini have played the Scarlett Knights each season since head coach Lovie Smith was hired, and he sees the game as a big opportunity for his team.

“This is a team we’ve played every year, so we’re familiar with the personnel,” Smith said. “We’re underdogs again. … We’ve got a great opportunity this week, and we’re gonna take advantage of it.”

Illinois is coming off a home loss to Minnesota, a game in which the Illini saw as a chance to get in the win column for 2020. That was not the case, as the Golden Gophers ran all over Illinois and won the game 41-14.

The Scarlett Knights are also coming off of a 49-27 loss at Ohio State. Despite having given up seven touchdowns, OSU is considered by many to be the best team in the Big Ten, and 27 points on the board for Rutgers was an achievement in itself.

After last week’s disappointing effort on both sides of the ball, the Illini will be returning some key pieces to improve their game this Saturday.

“As you can imagine, we’re pretty excited about getting everybody back,” Smith said. “Wednesday we will get our quarantine players back … I just know that we’re a better football team with them, and I can’t wait to get them back.”

With Williams returning, it is unknown who will be starting this week at quarterback for the Illini.

Sophomore Coran Taylor started last week against Minnesota and played all but the first drive against Purdue, but was only impressive in one of his two games. Taylor proved against Purdue that he could play against a Big Ten defense but put up less impressive numbers the following week.

Williams has never started at quarterback in his college career but came out of high school as the 94th ranked recruit by ESPN as an athlete and was named before the season started as the second-string quarterback.

“We’re gonna let those guys take reps, obviously we’ll get guys back which is a good thing, a bit more competition,” said offensive coordinator Rod Smith. “We’ll just let them kinda take some reps and see who can separate themselves throughout the course of the week.”

Whether it’s Taylor or Williams starting for the Illini, the whole offense will have to improve to give them a chance to win on Saturday.

Rutgers is a better team than it has been in the recent past and won’t allow points as easy as they have to the Illini in previous years. Despite giving up 49 to a talented Ohio State team, Rod says their defense is something that can’t be overlooked.

“They’re a much-improved team. You can tell they’re well-coached, their steam’s different than what it’s been in the past,”  Rod said. “They basically are playing at a different level right now than what they have. So I just think the fact that they’re much more aggressive, much more talented than probably what they were is gonna present a challenge.”

As they tried to do in the last game, Illinois will look to get the running attack more involved against Rutgers.

Mike Epstein and Chase Brown both were able to make a couple of big runs against Minnesota, combining for 139 yards and a touchdown, but almost half of that was on a 63-yard run in the second quarter by Epstein.

“We have to be able to run the football,” Lovie said. “Mike Epstein was over 100 yards this past week so we had our moments, we just need to be more consistent with it.”

The Illini will once again be challenged defensively, facing a team that put up 38 points in its opening week win over Michigan State and has scored 86 points total in three games.

The Scarlett Knights brought in transfer quarterback Noah Vedral to run the offense, which he has been able to do so efficiently. Head coach Greg Schiano also has liked to mix in some trick plays over his first three games of the season, which will keep the Illinois defense on its toes Saturday.

“They run a lot of trick plays, keep you guessing,” Lovie said. “(Vedral) is a good leader, knows how to run the offense. … There’s a lot of different flavors offensively that they give you.”

After last week’s blowout loss to Minnesota, the Illini are eager to bounce back and get a win for the first time this season. At least six players are returning after ten-day absences, and this weekend may be one of Illinois’ best chances left this season to come out on top.