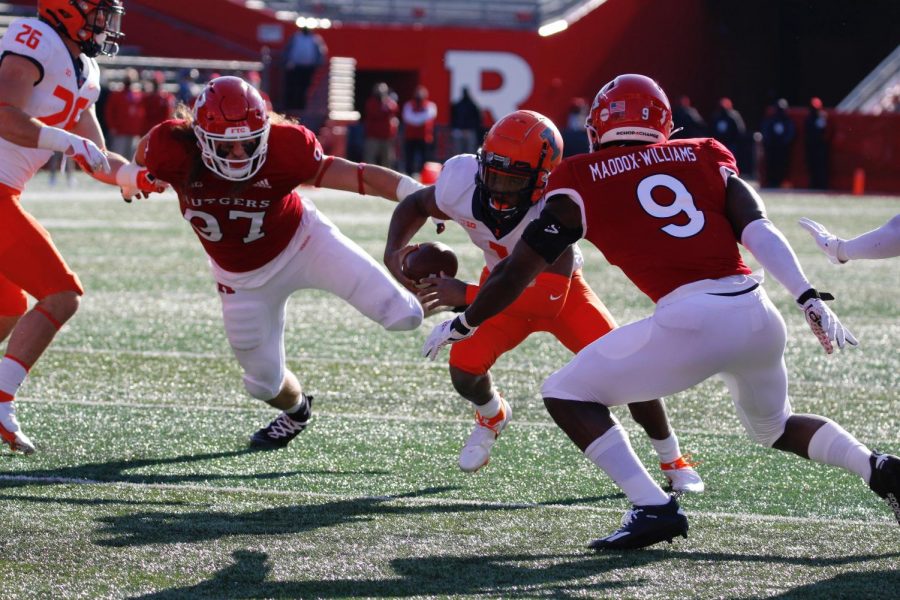 Illinois earned its first win of the season Saturday afternoon, defeating the Rutgers Scarlett Knights 23-20 on a game-winning field goal by James McCourt.

With Rutgers driving down the field late in the fourth quarter, a ball thrown behind the receiver that was picked off by Nate Hobbs resulted in quarterback Noah Vedral’s third interception of the day and gave the Illini life.

“I knew the time was going to come when I would have to deliver,” McCourt said. “I wrote in my notebook earlier this week that I felt a game-winner was gonna come this week… It felt good.”

Williams started his first game as an Illini, and despite some early nerves and a fumble on his second drive, the redshirt freshman was able to keep Illinois in the game.

Williams led Illinois on an 87-yard drive in the second quarter and finished it off himself with a 3-yard touchdown run, the first of his career. Williams passed for 46 yards and ran for 63 in the half.

Rutgers led the game 13-7 at halftime, but the Illini defense was able to keep them in the game in the first half.

The Scarlett Knights nearly doubled Illinois’ yardage total in the first half but were just one of eight on third down. The Illini defensive line was able to get through Rutgers’ offensive line on multiple occasions and recorded four tackles for loss.

“That’s what they’re supposed to do,” head coach Lovie Smith said. “They continue to fight… We’re headed in the right direction, we saw signs of improvement that we needed to make.”

Illinois started the second half with a promising drive, mixed in with runs from Williams and Chase Brown. Brown’s 39-yard run was followed by 11 from Williams, but despite having first and goal at the one-yard line, Mike Epstein and the Illini failed to get in the end zone and settled for a field goal.

Lovie Smith said prior to Saturday’s game that he and his staff would try to accelerate the run game against Rutgers. With Williams under center, they were able to do so effectively.

Epstein added in the Illini’s second rushing touchdown of the day in the third quarter, cutting Rutgers’ lead to 20-17. The trio of Williams, Brown and Epstein combined for 342 yards and was the life of the offense.

“Isaiah (Williams) of course, was outstanding, Chase Brown I thought was also,” Smith said. “I think it helps an awful lot when you have a quarterback that can run.”

After a Jake Hansen interception in the third quarter, Devonte Witherspoon recorded his second interception in two games when he picked off Vedral with six minutes left in the fourth. In what was a tie game, the takeaway stopped a Rutgers drive and gave the Illini a chance to kill the clock and take the lead.

Turnovers once again proved to be a difference-maker for the Illini on defense, who rely on takeaways as much as anyone in college football. The offense didn’t capitalize the way they had hoped, only scoring six points off the interceptions, but for the first time this season achieved their goal of three takeaways on the day.

“I think as a defense, and really as a team not even as a defense, we thrive off turnovers. So when we get those turnovers it brings energy, it brings juice, it brings momentum,” Hobbs said. “It’s just a real game-changer and I think we did that today, and I wanna say that’s why we got the dub.”

Williams broke the Illinois record for rushing yards by a quarterback in just his first start for the Illini, finishing with 192 yards and a touchdown. He also threw for 104 yards, including a crucial pass to Casey Washington that set up McCourt for the field goal.

Saturday’s win at Rutgers is the first of the year for Illinois. Lovie Smith has now beaten the Scarlett Knights four of five times since becoming head coach, and today achieved a crucial first win of the season after losing three straight.

“Just super happy for the team. We deserve this. We’re a good football team and we’re slowly piecing it together. I think this win is going to propel us in the right direction,” McCourt said.

The Illini will look for a second straight win next week when they travel to Lincoln, Nebraska to take on the Nebraska Cornhuskers at 11 am.