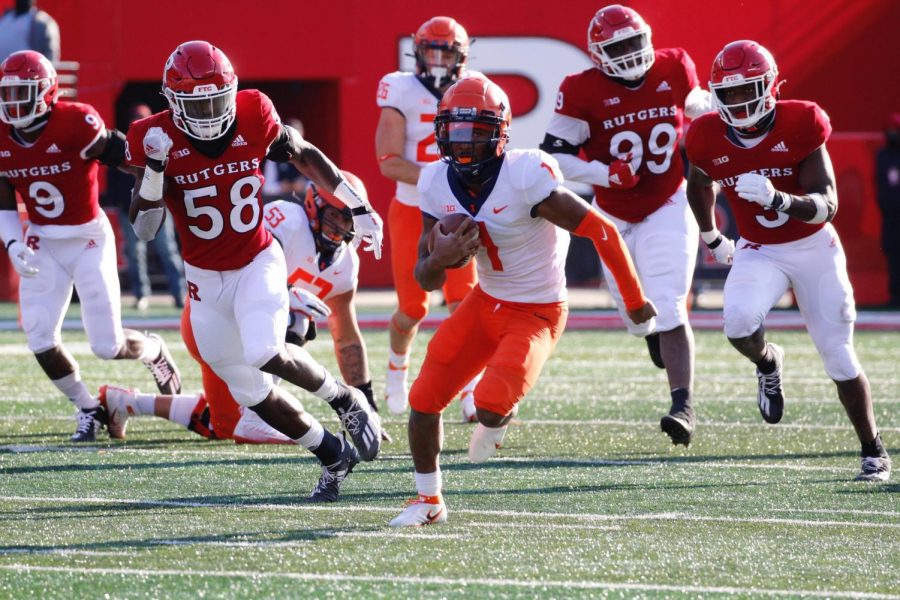 With seven seconds left in the Illinois game against Rutgers on Saturday, James McCourt hit a 47-yard field goal to give Illinois a 23-20 lead. This lead was the team’s first of the season and secured their first win since their November 2019 comeback against Michigan State.

The team relied heavily on their rushing attack as Isaiah Williams and Chase Brown combined for 326 yards and a touchdown on the ground. The defense also came together as they played better coverage and got three interceptions in the game.

The 1-3 record doesn’t raise Illinois above anyone in the Big Ten West standings, but it does offer them a chance to create momentum going in a season which they have not had a lot going for them.

Week four against Rutgers saw Illinois start their fourth different quarterback in four weeks. Second-string quarterback Isaiah Williams got his first start after seeing a few plays in Illinois first game of the season against Wisconsin. Williams, who had been out with COVID-19 contact tracing protocols, was the leading rusher on the field with 192 yards and a touchdown.

This might have been Williams’ only chance to get the start this season because first-string Brandon Peters will be eligible to play next week as long as he passes all other COVID-19 protocols.

Last week against Minnesota, penalties killed Illinois on defense and offense. Against Rutgers, Illinois saw similar things early in the game. A pair of penalties on fourth-and-goal caused a would-be touchdown to turn into a field goal for the Illini. The penalties cleared up as the game went on, but the Illini have to look to put together a clean game as they look to face more tough competition over the next few weeks.

Third down has been something Illinois has struggled with throughout the season on both sides of the ball. But, that was different today against Rutgers. Illinois went 8-for-17 on third down, which is just under 50%, but it is much better than Illinois has done through the first three games. On the other side, Illinois forced Rutgers to only 4-14 on third down. The impact of this can be seen in the difference in time of possession, especially in the second half where Illinois held the ball for just over 20 minutes and Rutgers only had it for nine minutes and 45 seconds.

Head coach Lovie Smith likened the third-down stops to forcing turnovers in his postgame press conference. If Illinois can continue to force punts or risky fourth-down conversion attempts, the Illinois offense should continue to see the field more.

With Isaiah Williams at quarterback, the Illinois offense had to rely on the rushing attack. In the first half, rushing was a struggle. But, as the second half started, runs broke through, as Brown glided through the defense to get a 39-yard rush. The two-headed rushing attack of Brown and Williams put up over 300 yards.

While Williams is most dangerous on the run, he still made plays in the air to keep Illinois in the game. The play that put Illinois in field goal range to win came when Williams connected with Casey Washington on a comeback route for a 16-yard gain.

The offensive line had their struggles as protection was spotty at times, they committed penalties at bad moments and Doug Kramer had some low snaps. But, the team opened up run lanes as the game went on, and it seemed like they outlasted the Rutgers defensive line, which was dominant early.

Williams is now the fourth starting quarterback for the Illini, but he is the only one to end a game with a win. He’s had to sit out of team activities during week two and three because of COVID-19 contact tracing, but he said he focused on his mentality to be ready for this moment during those two weeks.

While he had mistakes with some fumbles and bad throws, he showed up when the Illini needed it. Isaiah carried the load for the Illini, accounting for over half of the rushing attempts and rushing yards and, of course, all of their passing yards. The offense didn’t just go through Williams, the offense was Williams.

It’s improbable, assuming Brandon Peters stays healthy for the remainder of the season, we see Williams start at quarterback again. But, we have already seen Williams be used in designed QB runs and even playing stints as a receiver in some games, so we can look forward to more Williams this season in some capacity. If this is Peters’ last year though, Illinois might morph into the offense we saw today if Williams is the program QB next season.

Williams’ would have earned an “A” if he could have done more in the air and didn’t fumble the ball.

I have been one of the defense’s biggest critics this season. But make no mistake, on Saturday the defense won the game. Their three interceptions put the offense in great situations to score.

The defense struggled a little out of the gates. On the first drive, Illinois forced Rutgers into a fourth-and-three on Illinois’ 29-yard line. But, possibly in an effort to limit the short play that would convert the fourth down, the defense let up a fade route on the outside for a touchdown.

Like every week, the defense gave up big plays. But, what set this week apart was when stops were needed, Illinois got them. All three of Rutgers’ turnovers came in the second half. A tip-drill interception to Jake Hansen, a 50/50 ball that Devon Witherspoon went up to get and an opportunistic pick that kept Illinois in the game from Nate Hobbs were all essential to keeping Illinois in the game.

Illinois’ defense might have a long way to go before they can compete on a weekly basis with Big Ten teams, but this was the performance they needed to start to gather momentum.