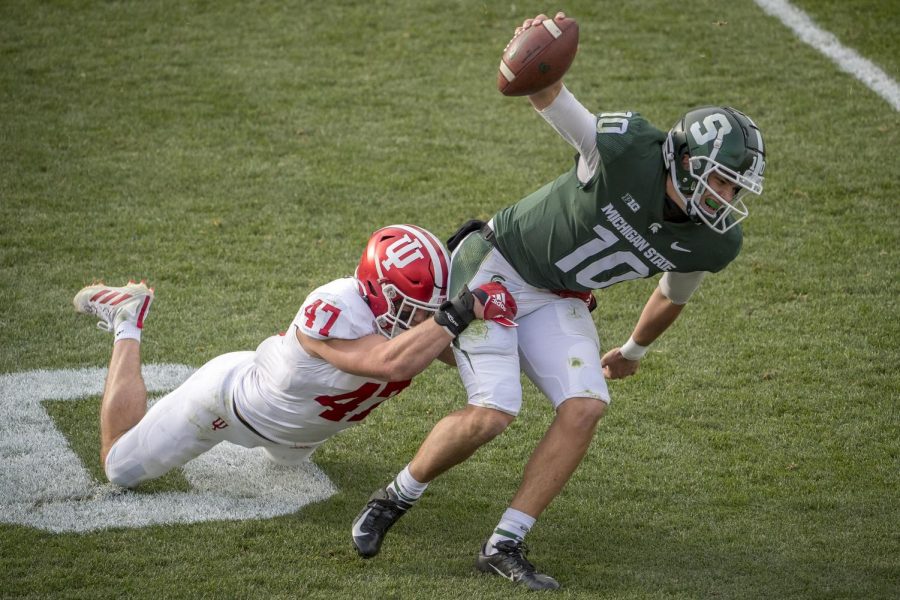 Though it may not have been the prettiest game ever, Illinois edged Rutgers for its first win of the season on a last-minute game-winning field goal from James McCourt. The Illini defense stepped up when the team needed it most, forcing three interceptions, including one with one minute and 17 seconds left from Nate Hobbs. While Illinois picked up a much-needed win, let’s see how some of its other Big Ten rivals played this week.

After falling in their first two games by a combined five points, Iowa has bounced back over its last two games, winning by a total margin of 70 points in victories over Michigan State and Minnesota. The Golden Gophers, on the other hand, are trending in the opposite direction; aside from picking up their first win of the season last week against the Illini, they have lost by an average margin of 18 points.

Though quarterback Spencer Petras only had nine completions for 111 yards, running back Tyler Goodson dominated for the Hawkeyes on the ground, rushing for 142 yards and two touchdowns, both career-highs. Iowa’s defense also came up big in the win, forcing two turnovers, the team’s fourth multi-turnover game this season.

Following a 41-point performance against Illinois last week, the Minnesota offense stalled against Iowa, though penalties were one of the team’s biggest weaknesses in their week four loss. Star running back Mohamed Ibrahim failed to find the end zone for the first time this season after scoring 10 touchdowns through his first three games, though he did finish with 144 yards on the ground.

Minnesota looks to avenge their loss and get back to winning ways against Purdue on Friday, while Iowa travels to take on a struggling Penn State team and extend its win streak.

It’s hard to believe that a team ranked in the top 10 to start the season is now 0-4, though, given the craziness of 2020, it’s hard to be surprised by anything these days.

Prior to this game, Nebraska Scott Frost decided to bench quarterback Adrian Martinez in favor of second-string Luke  McCaffrey, and it looks like his decision paid off, as the Cornhuskers picked up their first win of the year. Despite allowing Penn State to put together over 500 yards of total offense, the Nebraska defense came up with two big stops in the fourth quarter with the opposing offense driving in the red zone. The Cornhuskers built a 23-point lead at halftime, and though their lead slipped to just seven with over nine minutes left to play, the team’s offense did just enough to hold on.

Nebraska wasn’t the only team with quarterback issues, as Penn State head coach James Franklin opted to bench starter Sean Clifford after he turned the ball over twice in the team’s first three possessions. Will Nevis stepped, and though he failed to find the end zone in the air, he racked up 280 total yards of offense, with tight end Pat Freiermuth his favored target, connecting for seven receptions and 113 yards.

Penn State is still looking for its first win of the season and hosts an upward-trending Iowa team, while Nebraska welcomes Illinois to Lincoln in Week 5.

After seeing Indiana dominate week in, week out, it’s odd to imagine this team received just one vote in the AP top 25 poll before knocking off then-No. 8 Penn State at home under the lights. Four weeks in and this team looks a serious Big Ten title contender.

The Hoosiers dominated on both sides of the ball, as the offense put together over 400 yards of total offense, including 320 yards in the air, while the defense forced four turnovers and shut out a lackluster Spartans’ offense. Ty Fryfogle was quarterback Michael Penix Jr.’s favorite target, as the senior wide receiver made 11 catches for 200 yards and two touchdowns

After a near-perfect performance against Michigan two weeks ago, Michigan State quarterback Rocky Lombardi just hasn’t had the same confidence and dominance, throwing two interceptions before being pulled in favor of freshman Payton Thorne, though he wasn’t able to do much damage. The Spartan offense put together less than 200 total yards and didn’t play a single snap in the red zone, while the defense was on the field for almost two-thirds of the game.

Indiana, who is 4-0 for the first time since 1987 and jumps up to No. 9 in the most recent AP poll, faces its toughest challenge yet in Week 5 on the road at No. 3 Ohio State, while Michigan State travels to Maryland, though it is unclear if that game will be played given the recent COVID-19 outbreak within the Maryland squad.

Coming into this game, many didn’t expected this to be a battle between two undefeated teams, myself included. It was the Wildcats, however, who emerged victoriously and picked up their fourth straight win of the season, already more than their entire 2019 campaign.

While the Wildcats may not have the flashiest offense or jaw-dropping offensive production, they get the job done, with quarterback Peyton Ramsey throwing for over 200 yards for only the second time this season, connecting with receiver Ramaud Chiaokhiao-Bowman for three touchdown passes. Northwestern’s defense is also arguably one of the best in the Big Ten, averaging only 14 points allowed per game through four weeks of action. And they continued their dominance against Purdue, allowing them to just two rushing yards in the win.

Purdue is still without star receiver Rondale Moore, though that hasn’t stopped them from winning two games this season. Another solid performance from quarterback Aidan O’Connell (263 yards, two touchdowns and zero interceptions) certainly gave the Boilermakers hope, but accumulating two rushing yards doesn’t do you any favors.

Northwestern, up to N0. 19 in the AP poll, returns home to face No. 10 Wisconsin for its toughest challenge yet next week, while Purdue travels to take on an inconsistent Minnesota squad.

When first-string quarterback Jack Coan went out with a foot injury prior to Wisconsin’s opening week matchup, there was a bit of uncertainty with how the program’s offense would fare against other top teams in the Big Ten. After two games, it already appears like Graham Mertz is Coan’s long-term replacement.

One would expect some rustiness from a Badger team that hasn’t competed since Oct. 23, but the team ran rampant, putting up 468 yards of total offense and seven touchdowns against a Wolverine squad that was ranked to start the year. Wisconsin had five different players rush for touchdowns, while the team racked up 341 yards on the ground. After throwing for five scores against Illinois in week one, Mertz threw for a modest 127 yards and two touchdowns in the win.

Playing Wisconsin is always going to be a tough task, but allowing over 340 yards on the ground doesn’t help, especially with quarterback Joe Milton’s struggles on offense; the junior threw for just 98 yards and two interceptions, including one on the team’s first offensive play of the game, before being replaced by sophomore Cade McNamara in the third quarter. This game was essentially over after the second quarter, as Michigan trailed 28-0 at halftime, the largest halftime deficit since Michigan Stadium was built in 1927.

Wisconsin jumps up to N0. 10 with the win and will travel to Evanston to take on No. 19 Northwestern in its third game of the season, while Michigan looks to right the ship at Rutgers.