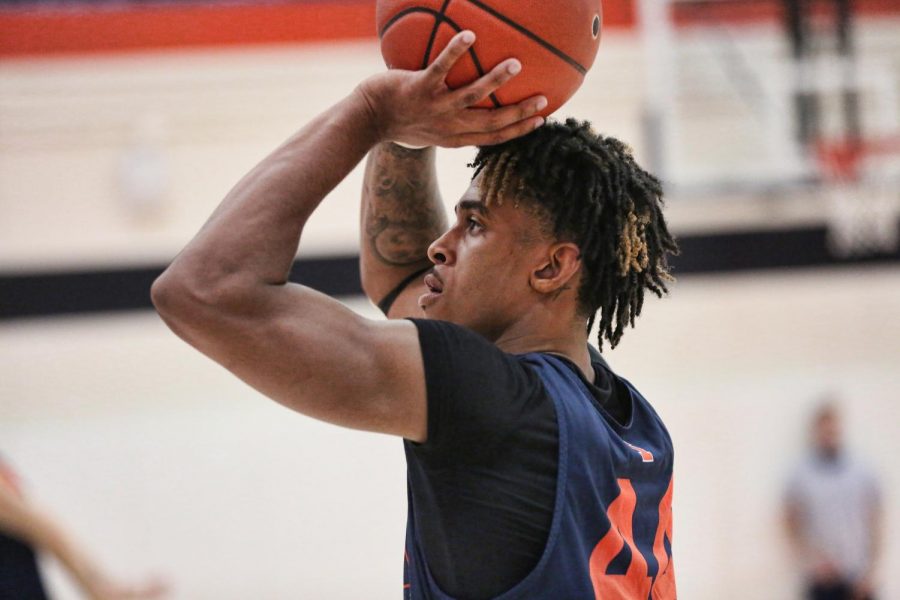 Freshman guard Adam Miller shoots the ball during practice on Nov. 4. Miller has acclimated well to the Illinois basketball team.

For most freshman college basketball players, joining a new team can lead to many uncertainties. Add in the questions surrounding COVID-19, and the freshman experience can be anything but normal.

Illinois freshman guard Adam Miller, however, has quickly felt at home in Champaign. Miller already has a connection with current Illini guards senior Da’Monte Williams and junior Ayo Dosunmu. Miller and Williams grew up in Peoria together and were workout partners in middle school before briefly sharing the court for Peoria Manual. Miller then transferred to Morgan Park, where he got the chance to play with Dosunmu for a year. Miller, Dosunmu and Williams also all overlapped on the Mac Irvin Fire, an AAU team.

When Miller signed with Illinois, it was expected that Dosunmu would keep his name in the NBA Draft, allowing Miller to take the reigns as the scoring guard.

“I feel like playing with them, I’m getting a bonus,” Miller said. “I’m gonna find my niche wherever I’m at. Whoever’s the main option, whoever’s the second option, I’m gonna have my niche, playing defense and finding my role.”

While Miller won’t be the featured offensive guard, he will still have to play a massive role for this team. Head coach Brad Underwood has historically run a lot of three-guard sets that create shots and opportunities for each player. Miller’s off-the-dribble game could be a nice feature next to Dosunmu and returning senior guard Trent Frazier. It took Miller some time to learn the three-guard offense, but now he feels like he has it down.

“Learning the system, it took me a minute because I’m smart, but I always ask ‘why,’” Miller said. “It took me a second … but for me I really wanted to learn this to a tee so if I get in any situation, I’m gonna be prepared.”

The biggest impact Miller should have, though, is his shooting. Miller is billed as one of the better shooters in the 2020 recruiting class, which should help an Illinois team that finished dead last in three-point shooting last season at 30.3%.

Miller has been on Illinois fans’ radar for a while now. He’s been one of the top-ranked prospects in the state since middle school. His first college offer was from former Illini head coach John Groce in October of Miller’s freshman season. Groce was fired at the end of that year, but Underwood and his staff quickly resumed recruiting him.

When Miller committed here, the Illini were not the projected top-10 team they are this season. Miller had offers from top programs like Kansas, UCLA, Arizona and Texas Tech. When Dosunmu returned, there were rumors he would not sign with Illinois and commit elsewhere. But through it all, Miller stayed loyal to Illinois and is prepared to help take this program to the next level.

“The culture we’re building here is a winning culture,” Miller said.  “We’re building something here. We’ve got pieces. We’ve got everything we need … All we gotta do is work hard and out-tough everybody every night.”