Column: Is Isaiah Williams a viable option for Illinois’ future? 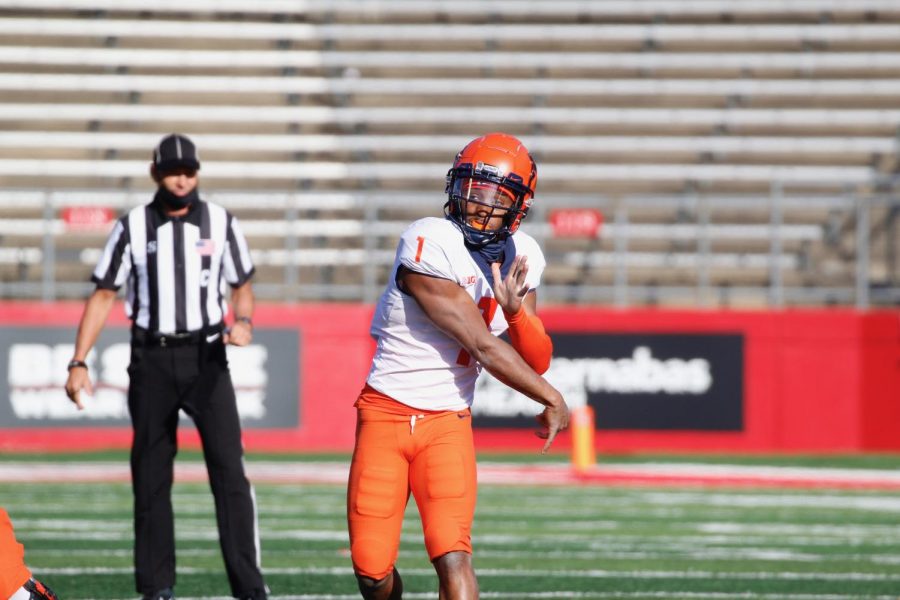 Redshirt freshman quarterback Isaiah Williams throws a pass during the game against Rutgers on Saturday. Illinois won the game 23-20.

Through three weeks, the Illinois offense struggled to find an identity.

Against Wisconsin, all aspects of the offense were shut down, with the exception of senior quarterback Brandon Peters’ run game, which can’t solely win games. In week two, with Peters out due to COVID-19, Matt Robinson, who has a solid but inconsistent arm, stepped in. But an injury after one drive forced fourth-string sophomore Coran Taylor into a near-starter role. And while he showed flashes of a dynamic offense, turnovers led to another loss. Then in week three, junior running back Mike Epstein’s run game was the only facet to find success under a Taylor-led offense.

That takes us to week four. Because of the Big Ten’s 21-day rule when a player tests positive for COVID-19, Peters was held out one more week despite traveling to Rutgers. However, after missing two weeks due to contact tracing, redshirt freshman Isaiah Williams was back.

Earlier in the week, head coach Lovie Smith said he was pretty confident he knew whether Williams or Taylor would start against the Scarlet Knights. Lovie officially gave Williams the nod Friday.

“Coach Lovie told me (I was starting),” Williams said. “He called me up and was like, ‘you’re gonna get your shot. You had a great camp and now it’s time to show the world.’ And that’s what I showed today.”

Williams isn’t wrong. In his first start as an Illini, the quarterback didn’t shy away from his big moment.

Illinois came into Rutgers 0-3. Many, including myself, saw this as a must-win game not only to salvage the shortened season, but for Lovie to salvage his job. The Illini have been underwhelming to begin the season despite claims this was the best team in recent years.

That energy shifted Saturday when Williams led the Illini to a 23-20 victory over the Scarlet Knights. And how did he do it? By establishing an identity: the run game.

Williams rushed for 192 yards on 31 carries, breaking the previous program record held by A.J. Bush for the most single-game rushing yards by a quarterback.

In the third quarter after a 22-yard run from Williams, he hit sophomore wide receiver Casey Washington for a 20-yard pass, bringing Illinois down to the Rutgers 3-yard line. Three plays later and Epstein carried the ball into the endzone for Illinois’ second touchdown of the day.

In the final drive of the game, nearing overtime territory with a 20-20 score, Williams let his arm carry the Illini into field goal territory. Williams made two 16-yard passes to Washington in the drive, the second one stopping the clock with seven seconds to go and setting senior kicker James McCourt up for the game-winning kick.

“I think I showed heart … 30 carries, that’s a lot of carries,” Williams said. “I just kept playing. And then the last play, the back shoulder, I showed that progress is being made, and that’s all that matters. Because I keep getting better.”

Needless to say, Williams has the skill to be a solid Big Ten quarterback. Obviously, the 39% completion percentage could use some work and Williams isn’t afraid to admit it.

“I’ve got to have the coaches more confident in me throwing the football,” Williams said. “So, it’s back to the lab and gotta get better at that to become complete.”

So here lies the big question following the game: Can Williams be the future?

I’m not talking immediate future, like next week or any point this season. I think it’s a safe bet that Peters will get the start at Nebraska as he returns to practice this week. While he struggled against Wisconsin, we all know there’s more to Peters than week one showed.

But I’m not sure if I can answer my own question yet. While many running quarterbacks have found success at the high collegiate level, not all Big Ten defenses will let you run all over them. There needs to be some fluidity in the passing game throughout the full four quarters.

If Williams can find that consistency, strengthen up his arm and minimize rookie mistakes like turnovers, he could be a viable option for this Illini program moving forward.

Both Lovie and Williams himself have confidence he can continue to succeed. Lovie has been raving about the young quarterback’s improvement since late summer, saying “he’s had as good a training camp as anyone around.”

For the time being, the decision comes down to Peters versus Williams. While Peters won the quarterback battle easily the past two years, it’s hard to dismiss how well Williams fit into Rod Smith’s offense. Even if Williams starts on the bench next Saturday, I would be shocked if we don’t see him in designed run plays at some point.

“With Isaiah playing like he did, it does give us a lot of options as much as anything and that’s what we’ll do,” Lovie said. “The goal of every coaching staff is to try to put the guys and the team in the best place to be successful and we’ll do that this week.”