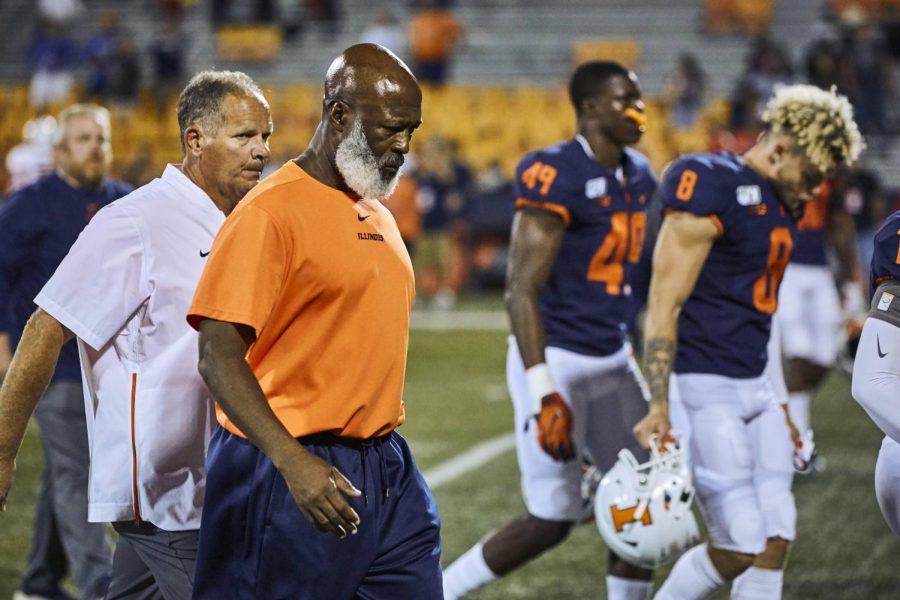 Illinois head coach Lovie Smith walks off the field after a disappointing 42-38 loss to Nebrasaka on Sept. 21, 2019. The Illini will look to beat the Cornhuskers this Saturday for the first time since 2015.

The last time Illinois knocked off Nebraska, Barack Obama was still president, Clemson hadn’t won its first title under Dabo Swinney yet, and Lovie Smith was coaching Jameis Winston down in Tampa. 2015 was a long time ago, and the Illini will need a different performance from its defense if they want to knock off the Cornhuskers again.

Since Scott Frost’s arrival to Lincoln, Nebraska, the Cornhuskers have run all over the Illini offensively. In each of the past two meetings, the Huskers have hung up 54 and 42 points, respectively, against Lovie Smith’s defense, despite missing bowl games in both seasons.

“They’ve played outstanding football against us the last couple of times against them,” Smith said. “That’s why we are anxious to see if we can slow them down just a little bit more than we have.”

Two seasons ago, the Illini didn’t stand a chance against the Cornhuskers. Behind the worst scoring defense in the conference — giving up 39 points per game — Nebraska quarterback Taylor Martinez routed the Illini for over 600 yards of offense, along with 54 points.

But last season, even with a much-improved defense and a bowl appearance, the Illini defense didn’t stand a chance against Martinez, who rallied his team to knock off Illinois 42-38 in Champaign. They even increased their total yardage to 674.

Despite the past two results, Illinois is facing a different Nebraska offense. After making “one of the hardest decisions I’ve ever made,” Scott Frost elected to bench his two-year starter in favor of Luke McCaffrey, the younger brother of Carolina Panthers running back Christian McCaffrey. The results: a victory over Penn State and their highest point total of the season.

“McCaffrey is an excellent football player,” Smith said. “He had the same type of effect that Isaiah (Williams) had on our football team this week. He can pass the football, and he’s good in space.”

McCaffrey, in his first career start, played well but not spectacularly. The freshman finished 152 yards through the air with a touchdown and an interception. His legs, though, made him most effective, adding an extra 67 yards and a touchdown on the ground, a facet Illinois has struggled to contain in recent meetings.

However, the offensive results can be misleading. Yes, the Cornhuskers tallied 30 points, but they also failed to manufacture 300 total yards of offense. One of their touchdowns came from a fumble return. Unlike Scott’s past two seasons, Nebraska’s offense has yet to find its rhythm, as they are only averaging 17.7 offensive points per game.

From an outside perspective, people would view their game against Illinois to be a perfect time to spark their offense. Through four games, the Illini are giving up an average of 34.3 points per game; however, the Illini are coming off their best performance of the season, holding Rutgers to 20 points while forcing three late turnovers.

A bulk of Rutgers’ yardage came from two long touchdown passes, including a 66-yard catch that should’ve been intercepted by the Illini. If the Illini look to contain a struggling Nebraska offense, the last thing they can allow is big plays that could spark the offense and give a young McCaffrey confidence.

However, like almost every Illinois victory, Lovie Smith’s squad will need to manufacture turnovers. The last time the Illini won a game without winning the turnover battle by at least two came back in September 2019, against a 2-10 Connecticut team. While McCaffrey has avoided massive mistakes, he has thrown a pick in each of the last two games.

The Illini travel to Lincoln with the chance to turn around a once written-off season just a week ago. Winning back-to-back games despite being underdogs in both would quiet questions on the immediate future of the program. But if the Illini allow Frost to rejuvenate his spread offense, the Rutgers game could look like an outlier.

“It seems like the Wisconsin game was a long time ago,” Smith said. “We’re better. We’re a better football team now. We need to be able to put it together two weeks in a row.”