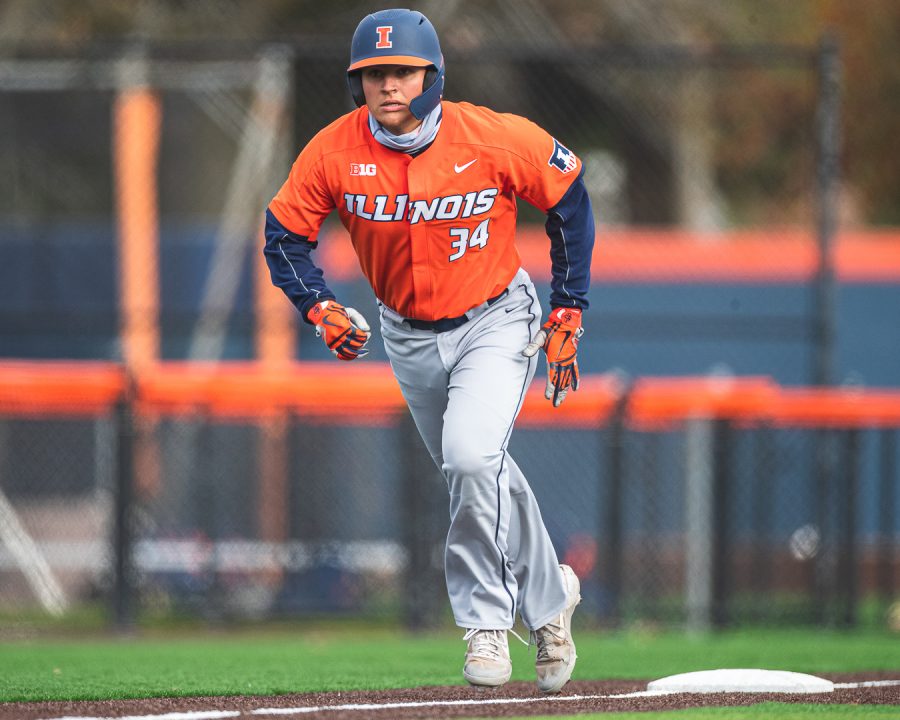 Junior Ryan Hampe runs the bases during the Orange and Blue series on Nov. 2. Hampe and the Illini look to turn things around against the Golden Gophers this weekend.

At the beginning of November, the Illinois baseball team competed in several intra-squad practice games, dubbed the Orange and Blue series. These games took the place of normally scheduled exhibition games against other teams, which were canceled due to COVID-19. Head coach Dan Hartleb said there were a lot of things that he liked from the Illini during the series, and that there were a few areas the team could use work on, but he felt there were a lot of good things overall.

“I wouldn’t say there were one or two standout performances during the Orange and Blue series,” said Hartleb. “I would say the entire team was strong and played well together.”

Sophomore pitcher Cole Kirscheiper expressed his happiness with the Orange and Blue series and said it was a great way to build chemistry.

“I feel like everyone, the transfers, the returners and freshmen are all buying into the same mentality right now, and that’s that we all want to win,” said Kirscheiper.

After a relatively successful beginning of the 2020 season, which was highlighted by wins over two nationally-ranked teams (Texas A&M and Oklahoma State), the baseball team is looking to build upon that success in the spring. Several returning players and some new transfers, including junior catcher Ryan Hampe, will be eligible for the 2021 MLB first-year player draft and will be eager to showcase their abilities to help the Illinois baseball team reach the playoffs, which they last did in 2018. Hampe is already showing signs of his value after hitting .500 in the Orange and Blue series with three doubles.

Hampe’s decision to transfer to Illinois was in part due to the recruiting efforts of his high school teammate, junior Brandon Comia. Comia was not only the biggest presence at the plate for Illinois last season, but he was also ranked the No. 9 shortstop in the nation by D1Baseball.

“We’re all pretty familiar with each other,” said Hampe. “We can really hold each other accountable without hurting anyone’s feelings.”

With the Orange and Blue series complete, practices will not be held until January when the team returns from winter break. Until then, they will continue lifting and building their team chemistry off the diamond.