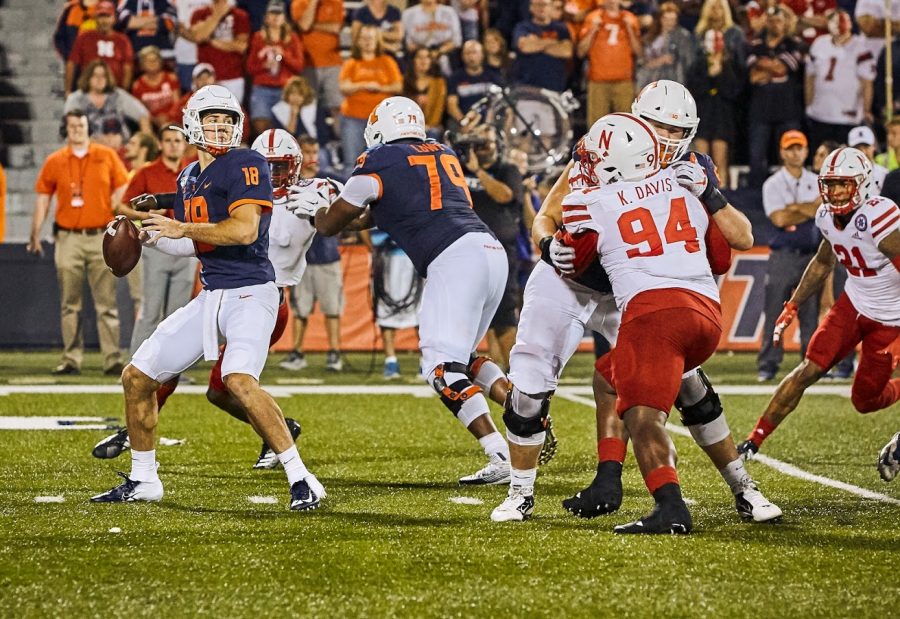 Quarterback Brandon Peters scans the field during the game against Nebraska on Sept. 21, 2019.

Two one-win teams will battle it out Saturday, as the Illini travel to Lincoln, Nebraska, to face the Nebraska Cornhuskers at 11 a.m.

Illinois and Nebraska last played in 2019 under the lights at Memorial Stadium, when the Cornhuskers lit up the Illini defense and won the game 42-38 after being down 21-7 in the first half.

“They put a lot of points on the board the last couple years we’ve played them,” said head coach Lovie Smith. “We played ’em tough last year of course but weren’t able to get the win, looking forward to going to Lincoln and playing them this year.”

The Illini are coming off their first win of the season, a 23-20 victory at Rutgers on a game-winning field goal by James McCourt. Three interceptions by the defense kept Illinois in the game, and redshirt freshman Isaiah Williams led the Illini at quarterback and set the school record for rushing yards by a quarterback.

Nebraska is also coming off its first win of the season, a 30-23 win over Penn State. Redshirt freshman quarterback Luke McCaffrey was all over the field for the Cornhuskers, scoring a touchdown in the air and on the ground, and a 26-yard fumble recovery for a score by the defense helped put Nebraska in the win column.

After three weeks of missed games and practices due to testing positive for COVID-19, senior quarterback Brandon Peters and redshirt freshman tight end Griffin Moore are eligible to play again. The Illini are now expected to be without a positive case on the team.

“It was unfortunate that a couple of our players were knocked out for a period of time, but that’s in the past and everybody’s here healthy and ready to go now,” Smith said.

Senior offensive lineman Alex Palczewski injured his right leg against Rutgers and could be a major absence for Illinois if he is ruled out.

With Peters returning, it creates yet another quarterback decision for Smith and his coaching staff. Williams was phenomenal on the ground in his first career start for Illinois and was mentioned on SportsCenter for his performance.

Brandon Peters, however, was the team’s Week 1 starting quarterback against Wisconsin and has started every game he’s been healthy for since he came to Illinois.

On the other side of the field, Nebraska has also been using multiple quarterbacks throughout the year. Junior Adrian Martinez started the first two games of the year for the Cornhuskers but was benched during the second game for McCaffrey, who then started last week.

In last year’s contest, Martinez torched the Illini defense, throwing for 328 yards and three touchdowns, as well as rushing for 118 yards.

“No one’s cycled through quarterbacks more than we have, but it’s good to see somebody else playing more than one guy,” Smith said. “Martinez is probably going to (his coach) and saying, ‘Hey, coach, those (numbers I’ve put up)’… I’m sure he’s kinda anxious to play us again this year. Seriously, McCaffrey is a great football player. … It’ll be a big challenge for us this week.”

Whoever the quarterback is for the Cornhuskers, Smith knows the Illini defense will have to step up to give their team a chance.

Nebraska found their groove against Penn State, and under a proven coach in Scott Frost can find ways to attack a defense with their well-rounded offense, just like in last year’s game.

“They have a good offense that put up a whole lot of yards against us, there’s not much different about it,” Smith said. “They run a spread offense and they run it well against us.”

In the past two games, offensive coordinator Rod Smith has emphasized utilizing the running game, and especially last week against Rutgers, they have done just that.

338 yards on the ground on Saturday was key to Illinois’ first win of the season, and they will look to do that again on Saturday against a Nebraska defense that Rod Smith knows will challenge the Illini.

“They’re a typical big, strong Nebraska defense. They’re long, they’re big, they’re very physical,” Rod said. “We like our running backs, we like the ball in their hands. … (Nothing) should affect how we do that.”

Illinois should be without any COVID-19 related absences for the first time since Week 1, bringing them as close to full strength as they’ve been the past three games. This is an important factor for the team, as they’re looking for revenge on the Cornhuskers after last year’s blown lead and heartbreaking loss.