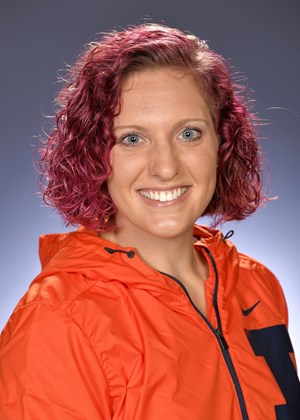 After going to college for athletic training and even earning a master’s in the field, working one-on-one with individuals made Kocan rethink what she wanted to do for a living. She viewed her original profession as the negative side of the sport.

She went full circle, going from coaching in high school, to rediscovering those feelings when she didn’t get what she had hoped for out of athletic training.

To start the journey back to coaching, she moved in with her significant other. She didn’t want the relationship to continue being long-distance, but he happened to own the Champaign Gymnastics Academy, which gave her the chance to explore coaching.

“He opened it up and brought some really great coaches,” Kocan said. “I started off just as a coach, and we just became immediately drawn to the same thing. The culture of his gym is about the community and about everyone feeling really good about themselves.”

This gym is how she made the connection to Illinois. Assistant coach Kaitlyn Betts got to know her and thought she would be a good fit, so she got head coach Nadalie Walsh to sign off on it.

Kocan was already a fan of the school because of the culture established. More than anything she admires how much they care about the athletes as people, not just for their talent.

“Kelsea is somebody who has a lot of energy, really passionate, not just about gymnastics but about people and about the program,” Walsh said. “She’s passionate about what she does in her own life, whether it’s CrossFit or running marathons. I just really loved the fact that she had just a lot of passion and a lot of drive. Another aspect that has been great about her is she is local; she’s committed to being in this area and stability and consistency is something I was looking for.”

Walsh considered Kocan a perfect fit, as she embodied the culture of valuing the whole person and not just their athletic gifts. She pours as much into them as people, as she does improve their skills, which gives her the potential to be an exceptional college coach. She also liked how versatile Kocan is, as she always wants her coaches to have the ability to help on all events.

Kocan started in September and has been excited to learn more about “the Illini way.” She has also been very appreciative of how welcoming everybody has been.

“It’s been super awesome,” said senior Jaylen Spence. “I think we’ve been very fortunate to have a bunch of coaches over our four years, and Kelsea’s has been a super cool addition and just having a different voice in the gym, just someone to give you a different perspective on things.”

Spence added Kocan’s bubbly and energetic personality combined with her unbiased perspective is what makes her so great, but it didn’t take much for the athletes to accept this new voice and love her; it was an easy transition to accept her into the Illini family. She understands the demands of the sport as a former gymnast herself and can give a coach’s perspective as well as one from a teammate.

“I was a club gymnast just like they were, and I trained 20 hours a week just like they probably did, some of them might have trained more, but you’re in 20 hours a week from the age of 13, all the way to 18,” Kocan said. “It’s basically like a part-time job; you give up a lot to be a gymnast, so I definitely understand that. These girls are also giving up a lot to continue on being a college gymnast, so it’s tough. There’s a lot of sacrifice in the sport.”

However, she never ended up being a college gymnast. She could have if she pursued it, but by the time she thought about it, it was too late. She didn’t take the time to network with coaches and do all the necessary steps required to make it a reality.

“I have a little bit of a different experience than a lot of these girls, but I think it’s really useful for them to have somebody that sees what a big opportunity this is for them. So that when they’re struggling, they were going through those hard times and then when they’re not feeling good about it, tell them we’ll take a step back and have them see, ‘look how far I’ve come and look where I’ve gotten to be,’” Kocan said.

Another thing that stands out about Kocan is she has been able to learn from and become really good friends with Olympians who have visited Flip Fest, hoping her connections will create dialogue for the gymnastics team.

“We’ve actually had a couple of conversations about who she’s worked with, just because obviously growing up in the gymnastics world, you idolize these Olympians and these elite-level gymnasts, and the fact that she has their contact information is pretty cool,” Spence said.