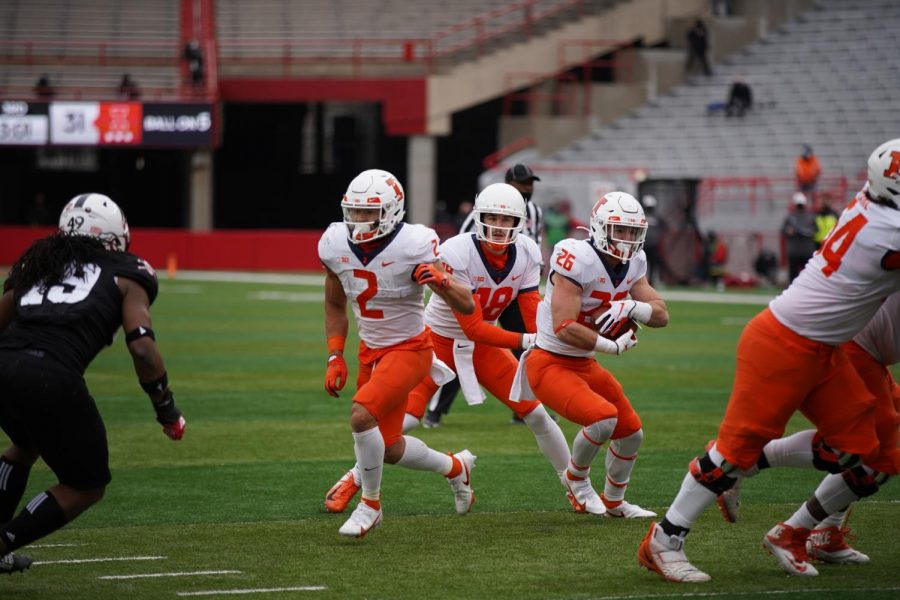 Running back Mike Epstein runs the ball during the game against Nebraska on Saturday. The Illini won 41-23.

After dropping its third straight game to open the season against Minnesota, it was a fair question to ask if Illinois football would win a single game this season. Now, they have won two games in a row on the road.

The Illini offense put it together through the air and on the ground, having 490 yards of total offense against Nebraska and winning 41-23.

This is Brandon Peters’ offense

In the first four games, Illinois started four different quarterbacks. Starting quarterback Brandon Peters contracted COVID-19 after the season opener against Wisconsin, which left him unavailable in weeks two, three, and four. Because of Peters’ shaky play in his only start at Wisconsin, and Isaiah Williams’ record-setting performance last week, there could have been questions about who should be the starter for the Illini at quarterback.

Peters ended all of those questions on Saturday, showing us why head coach Lovie Smith has him at QB1. Peters had 205 yards and one touchdown through the air, and 18 yards and a touchdown on the ground. After the game, Smith talked about how Peters showed up and was able to run the offense.

Forgetting about the game the Illini played against Wisconsin, which was bad in all areas, Peters has shown that the offense runs best through him.

Something that this Illinois team has stood by in the last two seasons is forcing turnovers. Even when the Illini defense struggles by giving up big plays and not stopping the run, they seem to always be one turnover away from changing the momentum. Turnovers kept them in the game to upset Wisconsin in 2019, helped them make the comeback against Michigan State to become bowl eligible last season, and put them in a position to win their first game this season at Rutgers.

On Saturday, five takeaways in the game set up the Illinois offense with extra drives and short fields, putting them up early. Illinois never trailed in the game, and the hot start happened because of the turnovers.

Before the season, the Illini offense looked to be in a position to be really good. A senior quarterback that was good last year, a receiving core that didn’t look to have a lot of holes, an experienced offensive line, and a solid running back duo. However, because of COVID-19 and other injuries, we hadn’t seen a complete offense at all this season. In the first part of the season, the offense lacked identity and didn’t seem dangerous. That has changed in the last couple of weeks.

This team is good when they establish the run. It is something they couldn’t do against Wisconsin, but when it happened against Rutgers and Nebraska, success followed.

Peters and company put up 41 points, their highest total by 17 points this season. Peters only had seven incompletions going 18-25 and throwing for 205 yards and a touchdown in the air and one on the ground. While 205 might not be eye-popping, the throws Peters made down the field were what helped the offense move all game. Peters looked poised, he didn’t force throws and it showed through the result with no Illini turnovers.

On the rushing side, Chase Brown and Mike Epstein combined for 223 yards and three touchdowns. They are solidifying themselves as a great running back duo for the Illini.

This was all made possible because of the effort of the offensive line. They established the line all game and made crucial blocks downfield which let Brown and Epstein break off huge runs throughout the game. They also only allowed one sack.

If this is the offense that we see throughout the rest of the season, the last three games of the season could become more interesting.

On Saturday, the defense set the tone for the game. The first fumble recovery, which came in the opening drive for Nebraska, gave Illinois the ball with only 21 yards to get to the end-zone.

In Lincoln, It wasn’t just turnovers though. The coverage was great and the pressure was there. There were not a lot of options for McCaffrey and he looked dazed at times. The defense only allowed 177 pass yards and one passing touchdown, forcing 12 incompletions on 30 pass attempts; much better than they have performed in the past.

Rushing was a little more of a struggle for the Illini. McCaffrey was able to rush for 122 yards and two touchdowns on 26 attempts and the defense didn’t have much of an answer for it. However, that is just what defenses sometimes have to deal with in a mobile quarterback. Outside of McCaffrey, the leading Nebraska rusher only had 60 yards on seven attempts.

Anyone who has watched Illinois football in the last few years knows that its best player is arguably its punter, Blake Hayes. Hayes is always in the best punter of the Big Ten discussion and gets national recognition as well.

Saturday though, he made highlights for more than just pinning opposing teams in their own 20-yard line. Early in the third quarter, Hayes was set to punt. When he received the snap he took his time to wind up his kick, assessing how the return team was responding. When he saw only one defender stay on the line, he booked it to the first down marker, converting on fourth-and-eight and keeping the drive alive.

“It’s definitely a play where I didn’t really know too much what was going on,” Hayes said. “I was kind of running around like a headless chicken a little bit.”

Hayes talked about how he isn’t the most athletic guy, but I say Lovie lets him get one of those a game.