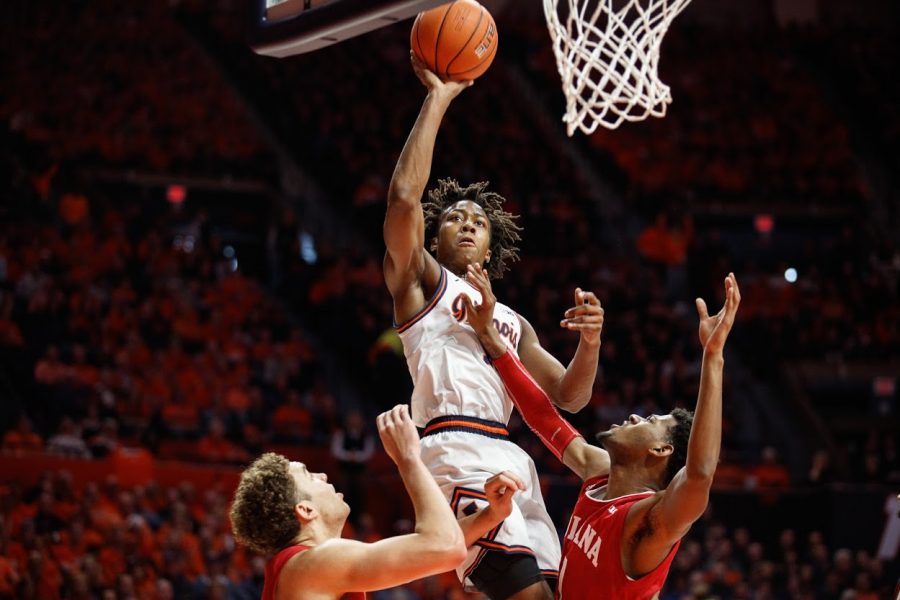 Junior Ayo Dosunmu shoots during the game against Indiana on March 1.

Entering this year, the Illini have much higher expectations, being ranked No. 8 in the preseason. If they want to live up to that ranking, here are the six numbers that will define their season.

The Illini were dead last in the Big Ten last season at 30.3% from three. You’d be hard-pressed to find a team that finished last in their league in three-point shooting and still won a conference title.  A large part of that low number, was regression from starting guards Ayo Dosunmu and Trent Frazier. Dosunmu shot only 29.6% from three last season, while Frazier went from 40% as a junior to 30.9% as a senior. The Illini also lost their best three-point shooter this offseason in Alan Griffin, who made 41.6% on four attempts per game.

The addition of four-star guard Adam Miller should help in this regard. The lefty has a smooth stroke and should shoot well playing off the ball. Division III transfer Austin Hutcherson is also in the mix now, after shooting 39% from three two years ago. Ultimately though, Dosunmu and Frazier will have to shoot better from three if Illinois wants to avoid being in dead last. Anywhere between 33 and 35% as a team should be sufficient enough.

The Illini went on too many scoring droughts, which is not a recipe for success. Improved three-point shooting would obviously help in the half-court. But the addition of four-star guard Andre Curbelo should be a bonus as well. Curbelo is a good enough creator to help the offense when things stall out. Dosunmu will also be tasked with more creation in the half-court.

Brad Underwood teams historically play fast, but that was not the case last season as the Illini only had 68.9 possessions per game, ranking 272nd in the country. Considering Dosunmu is one of the most efficient transition players in the country, and Underwood added guards Curbelo and Miller to his roster this offseason, it’d be in their best interest to pick up the pace. Taking more transition opportunities can also lead to less time in the half-court. In August, Underwood talked about wanting to play faster.

The Illini had no problems rebounding the ball last season, snagging 76.2% of defensive rebounds. However, they lost Griffin and Andres Feliz this offseason, a pair of plus rebounders for their position. If Illinois elects to start Da’Monte Williams at the four, then the team will be undersized and need to work even harder on the glass.

Last year, 14 wins was what it took Maryland, Michigan State, and Wisconsin to win the conference, meaning each team could afford to lose six games. Two seasons ago, league winners Michigan State and Purdue each had 16 wins. With the Big Ten appearing to have as much depth as the 2019-2020 season,  there will be a lot of parity. Seven Big Ten teams were ranked in the preseason AP poll, and Indiana received votes as well.

Winning 14 games may not be enough to capture the Big Ten title outright this season, but if the Illini can go 15-5 or 16-4 in conference, they’ll give themselves a very good shot.

At preseason No. 8, this year’s team isn’t expected to be as good as that Deron Williams and Dee Brown led group, but they have Final Four aspirations. To get there, they’ll have to improve on all of those statistics listed above.