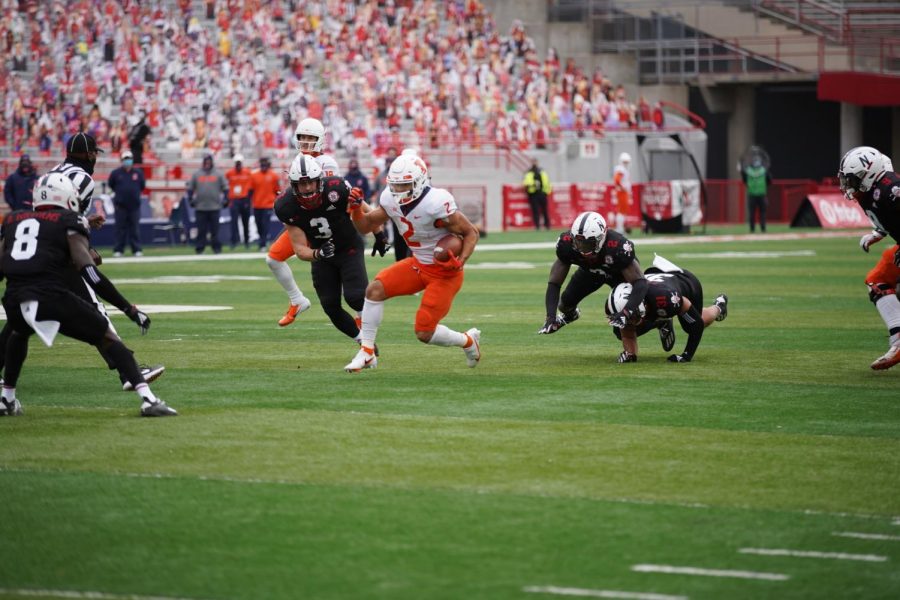 Running back Chase Brown advances the ball during the game against Nebraska on Saturday.

Lovie Smith and his Illini prepare to host Justin Fields and The Ohio State Buckeyes. Labeled a 28.5-point home underdog, the Illini have one shot at upsetting the Big Ten favorite: don’t let Justin be on the field.

With the Buckeyes having one of the most explosive offenses in the country, the Illini will need to control the ball and eat the clock to have a chance against the No. 3 team in the country.

“Each week that’s the case. You want the offense to keep the ball as much as possible,” said head coach Lovie Smith.

Ohio State comes into Saturday’s matchup with the conference’s top-scoring and total offense, averaging 45.3 points per game and 535.3 yards per game. Granted, the Buckeyes haven’t played the best defenses the nation has to offer. But, the Illini aren’t one of them either.

The Illini have made their living off turnovers for a while now. Last Saturday, the Illini won the turnover margin by five over the Cornhuskers in an impressive 41-23 victory. The turnovers slowed down the Husker offense, but turnovers don’t slow down the Buckeyes.

Since transferring from Georgia, Justin Fields has thrown just six interceptions in a Buckeye uniform, with three of them coming against their recent meeting with No. 11 Indiana. Despite playing human for once, Fields still led the Buckeyes to 35 offensive points and 607 total yards of offense. For Ryan Day’s offense, turnovers are merely a speed bump.

So are the Illini finished before kickoff? If turnovers won’t slow down Justin Fields, what will? For the Illini, the best defense will be Rod Smith’s offense.

Since the return of Isaiah Williams and Brandon Peters, the offense has been revived. While Peters threw the ball well against the Cornhuskers — arguably his best yet — the key to victory has been the running game.

Behind the veteran offensive line, the Illini manufactured 285 yards on the ground, leading to easier throws for Peters and a lopsided advantage in terms of time of possession. The week prior against Rutgers, Illinois ran for another 338 yards on the ground.

“We have a commitment to the run,” Lovie said. “Our running backs, Mike Epstein of course Chase Brown, have both played well throughout and then it opens up so many other things.”

A dominating rushing attack changes the game, especially as it eats up the clock. Against Nebraska, Illinois’ first three possessions of the second half lasted over 16:28. Drives of 16, 10 and 12 plays allowed them to rest their defense while keeping Scott Frost’s spread offense off the field; it sucks the life out of an opposing team.

Now a big question is whether the Illini can run for as much success against the Buckeyes as they have the last couple of weeks. Probably not as well, but there’s an opening.

Ohio State did hold the Hoosiers to negative yards rushing last week, but the Hoosiers also had 492 yards passing. Tom Allen abandoned the running game because Penix Jr. was able to torch the Silver Bullet defense. Through four games this season, Nebraska and Rutgers were able to have a sustainable running game, including the Cornhuskers’ 210-yard performance.

While Brown and Epstein have been productive as of late, Peters’ ability to run with his legs provides another dynamic Ohio State will have to stop. Nebraska quarterbacks Adrian Martinez and Luke McCaffrey found success with their legs, totaling 165 yards combined.

Ohio State comes into the game with one of its weakest defenses — statistically — in a long time. But what hasn’t gone away is Justin Fields and the collection of offensive skill players. Ohio State, if needed, could probably score 60 points to win the game. While Peters will need to be able to pick up yards through the air, trying to go toe-to-toe with the future first round draft pick and out-sling him through the air could prove costly for Lovie’s team.

The Illini have found success with their running game, a facet any team in college football would love to have. But, pulling off the upset of the season is daunting.

While a productive game of Lovieball usually does the trick, Fields, except last week, doesn’t cough up the ball. Moving the chains with the run game and keeping Fields on the sidelines as long as possible is the safest move they’ve got.

“We’re not going to play outside ourselves and see a bunch of trick plays,” said junior offensive lineman Kendrick Green. “We’re going to do what we do best. Whoever does what they do better will win the game.”