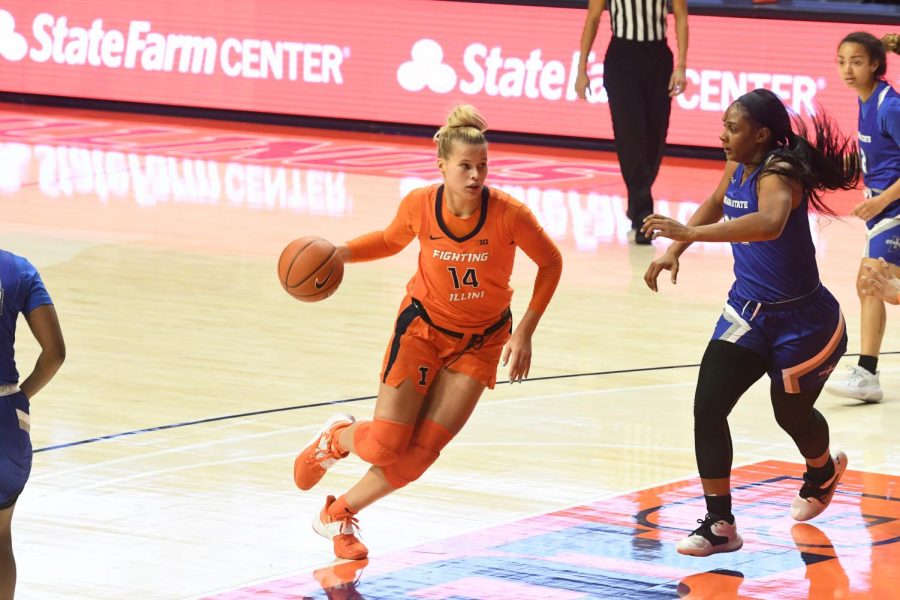 Geovana Lopes drives through the lane during the game against Indiana State on Wednesday. The Illini won 68-49 and Lopes scored 12 points.

The Illinois women’s basketball team started off the 2020 season with a win over Indiana State 68-50.

Sophomore Jeanae Terry had a career night, scoring 24 points on 8-10 shooting from the field. Terry credits her performance to taking advantage of mismatches.

“I used my size a lot, I noticed they had shorter guards, so I used the fact that I am so versatile to space out for the three and also attack,” Terry said.

The Illini defense stood strong to start off the game, forcing the Sycamores into tough shots, missing their first 10 shot attempts of the game. The Illini quickly led 8-0.

“We got out and ran and got a couple easy baskets early,” said head coach Nancy Fahey. “I was telling [the team] that the first four minutes of this game everybody is going to be as pumped up and excited and to understand that it’s not just us that feel that way. Every team in the country that could play today was fired up.”

As for the Illini offense, Terry started off hot from the field scoring eight quick points as the Illini led 15-10 after one quarter.

In the second quarter, the Illini continued to stretch their lead. Following a Geovana Lopes layup with five minutes left in the half, the Illini led 26-12. Slowly, Indiana State started to fight back and cut the lead to eight points with just over a minute left in the quarter. Both teams traded baskets to end the half and the Illini were up 30-21.

The third quarter put the nail in the coffin for the Sycamores. Offensive struggles continued for Indiana State as they shot just 4-15 in the quarter. Illinois took advantage and grew its lead to 18 points.

The fourth quarter was more of the same as Illinois finished off the game and gave Illinois an easy win to start 1-0 on the season.

The Illini benefited from the addition of their two new bigs joining the roster in redshirt-junior Eva Rubin and Lopes. Rubin finished the game with only four points, but her six rebounds and more importantly four blocks were crucial for the Illini. Lopes, on the other hand, finished with 12 points and six rebounds.

“[Playing with Lopes and Rubin] is amazing in all caps. We have the advantage now to compete with anyone in the Big Ten, no more excuses, now is the time to get stuff don,” said junior J-Naya Ephraim.

Beyond the court, the Illini wore warmups that said “I am” followed by the name of a victim of racial injustice. The shirts also said “more then a hashtag” on the back. The warmups were meant to show unity within the team as well as support for the fight against racial injustice. Ephraim used the gesture to show that the issue has been going on for a long time.

“I chose Rosa Parks because it shows that not just recently, not just 2020, but this has been happening, even back in the 1900s,” Ephraim said.

The Illini will return to the court Dec. 2 where they will face Valparaiso at home.