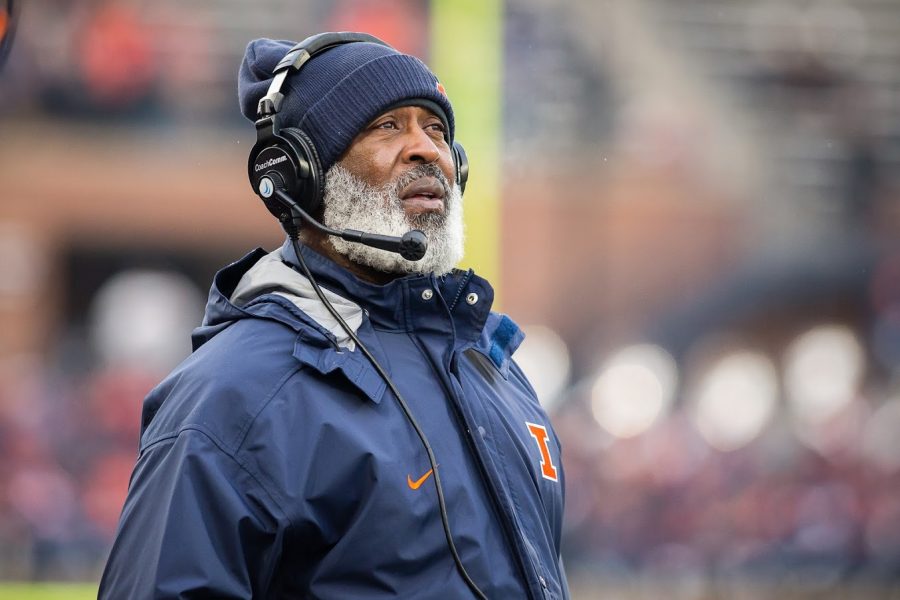 Illinois head coach Lovie Smith looks up at the scoreboard during the game against Iowa at Memorial Stadium on Saturday, Nov. 17, 2018.

After back-to-back wins, the Illini are set to host the Ohio State Buckeyes Saturday morning at Memorial Stadium.

Illinois and Ohio State last faced off in 2017, a game in which the Buckeyes dominated and won 52-14.

Illinois is coming off its second win of the season, a 41-23 victory over Nebraska. The Illini came into Lincoln without any coronavirus cases for the first time since week one and dominated on the ground and in the air en route to its second straight win.

Ohio State remain undefeated after a home win last week over Indiana. Despite a late push by the Hoosiers and quarterback Michael Penix Jr., the Buckeyes and Heisman hopeful Justin Fields held on for the win.

Fields, widely regarded as one of the best quarterbacks in the country, will be a tough task for Illinois on Saturday. The junior is a threat both through the air and on his feet and is sure to be a challenge for the Illini defense.

“Justin Fields is as good a player as there is in college football,” said head coach Lovie Smith. “He’s an excellent thrower, he makes all the throws. He so happens to be one of the best athletes in college football also, so he can hurt you. … When you have a guy like that leading the offense, it opens up everything.”

The whole Ohio State offense in itself will be a force that Illinois will have to try and slow down if the Illini have any chance of walking away with an upset victory over the fourth-ranked team in the country.

Sophomore running back Master Teague is averaging almost 100 rushing yards a game for the Buckeyes and wide receiver Garrett Wilson has proven to be Fields’ top target thus far, averaging 16.5 yards per catch. With weapons everywhere, there is a reason Ohio State is widely considered one of the top teams in the nation.

“They have excellent receivers … great running backs, their two tight ends, I think, are as good as two tight ends we’re gonna play this year,” Lovie said. “Offensive line, I think, four guys are coming back. You know, just a lot of production coming back, they’ve played a lot of football together. It’ll be a big challenge for us.”

As they seem to do each year, the Buckeyes boast another strong defense in 2020.

Before defeating Indiana, Ohio State was allowing just an average of 23 points per game and have weapons that will be difficult to score on.

“You can see why they’re one of the best teams, if the not best team, in the county,” said offensive coordinator Rod Smith. “There is not a weak spot anywhere when you watch them on defense.”

After their best performance since 2018, the Illini offense will once again have to play at their highest level to keep the team in the game on Saturday.

Senior quarterback Brandon Peters threw for over 200 yards last week, scoring a touchdown through the air and on the ground. The running back duo of redshirt sophomore Chase Brown and senior Mike Epstein both ran for over 100 yards and combined for three touchdowns, all of which contributed to the 40-piece on Nebraska.

“You gotta have the ability, at some point, to be able to run it or throw it effectively,” Rod said. “Balance is being able to line up and throw the football or line up and run the football when you need to to be successful.”

Despite no more absences caused by the coronavirus, the Illini will likely be without one or both of senior offensive lineman Alex Palczewski and sophomore linebacker Tarique Barnes against the Buckeyes, though the team is not expected to be missing any other key players this coming week.

Illinois will have to play like it’s 2007 if they want a chance of another major upset victory at home, having not beaten Ohio State since the upset win at the top-ranked Buckeyes 13 years ago. The Illini enter the game as 28-point underdogs.