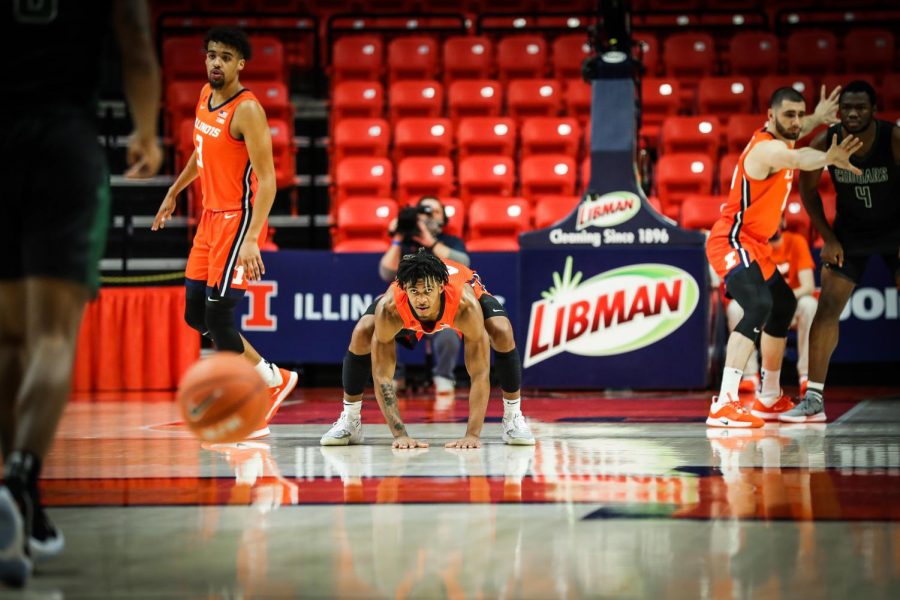 Adam Miller gets ready on defense in Illinois’ game against Chicago State on Thursday. The Illini won 97-38 and move to 2-0.

A day after their prolific offense led them to victory, the Illini got it done on the defensive end on Thursday. Illinois forced 16 Chicago State turnovers, leading to 26 points, in the 97-38 victory.

“The biggest thing right now is a lot of communication on the floor,” senior guard Trent Frazier said of his team’s defense. “All of us trying to limit our mistakes. Our bigs are doing a great job of communicating with the guards with ball screens and just flying around and finishing possessions with rebounds.”

After a 62-point victory over North Carolina A&T, Illinois did not come out of the gates slow. The defense was on full display early. Center Kofi Cockburn rejected the first Chicago State attempt, leading to an Ayo Dosunmu transition score. A possession later, the Illini forced a shot clock violation. Later, a Cockburn lay-up put Illinois up 9-0 and Chicago State called a timeout.

Offensively, Illinois was not quite as crisp as it was in the win on Wednesday. After a record-setting 17 three-pointers made, Illinois went just 3-7 from deep in the first half against the Cougars. Freshman Adam Miller, who set the record for most points in a debut, missed his only three-point attempt in the first half.

But both Miller and Frazier got going from deep in the second. They each hit consecutive threes in the second half, and Chicago State was forced to take a timeout, trailing 67-20.

The Illini defense did not let up in the second half. The Cougars started the half shooting 1-12, and had only 12 second-half points when Underwood pulled the rotation players.

“I’m just doing what I need to do and what I am capable of doing,” Cockburn said of his performance. “It’s just about doing that at a high level and doing that each and every game on the glass, whether it’s offensive or defensive. It’s a mindset that we have every day.”

A bright spot in the second half was the play of four-star freshman Andre Curbelo. Curbelo was quiet in the first stanza, with only two points. But the Puerto Rico native came alive in the second for 16 points, flashing his creative dribbling moves and finishing ability. Underwood was not surprised with Curbelo’s performance but still think there is room for improvement.

“He’s done that on the world stage with his national team,” Underwood said. “He’s pretty special, pretty electric. We’ve got to clean a couple footwork things up with him. He’s traveled a couple times but he’s crafty and heady and sees things one pass ahead.

Illinois will look to make it 3-0 as they play Ohio on Friday, who should be a notch above Chicago State and North Carolina A&T. The Bobcats beat the Cougars 84-61 on Wednesday. The game is scheduled for noon and can be watched on the Big Ten Network.