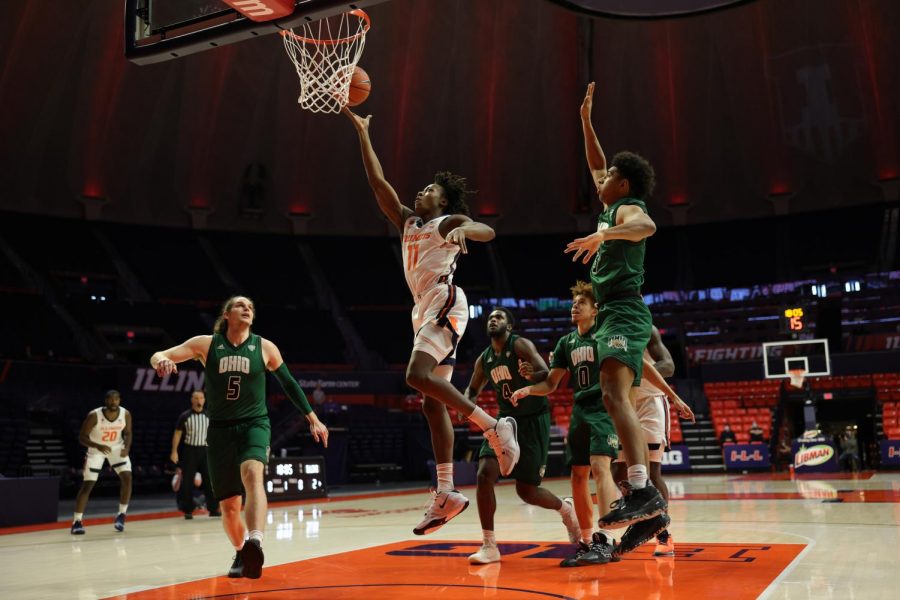 Ayo Dosunmu puts up a lay-up in Illinois’ game against Ohio on Friday. The Illini won 77-75 to move to 3-0.

With his team down 75-74 and on the verge of an epic upset, Ayo Dosunmu was unfazed. With 7.4 seconds remaining, Dosunmu took the inbound and went coast-to-coast for a layup.

“I knew we were fine,” Dosunmu said.

The Chicago native came off a back screen from Da’Monte Williams, used a running start and his blazing speed with the ball to accelerate down the court. He dodged a few defenders and glided through the air for a lay-up.

He couldn’t convert, but he got fouled with 2.3 seconds remaining. Dosunmu stepped to the line, and as he’s done many times in his Illini career, swished two clutch free throws, and Illinois regained the lead.

The Bobcats ensuing inbounds was stolen by Trent Frazier, who got fouled and made one of two free throws. Ohio missed a full-court heave and the Illini escaped 77-75 on Friday at State Farm Center.

“When you’re down one, you never want to settle,” Dosunmu said. “I tried to put pressure on the rim. That’s what I lift weights for. I tried to get there and get a good shot for our team and help us win the game.”

For the first time this season, Illinois was on the receiving end of the first punch. The Bobcats took an early 13-9 lead on a Jason Preston three from the top of the key. The Illini would storm back, though. Freshman guard Andre Curbelo, banked in a trey and Illinois led 21-19. Then, Dosunmu scored seven of nine Illinois points and the lead ballooned to 30-21.

Unlike Wednesday and Thursday’s opponents, the Bobcats would not back down. Rather, they went on their own 10-0 run capped by a Preston transition three and Brad Underwood took a timeout with his team trailing 31-30. The Illini would take a 35-34 lead into the half.

The Illini extended their lead to 58-53 on three consecutive Dosunmu to Cockburn dump-offs and it appeared the Illini would pull away. However, Preston would not let the Bobcats fall apart. He hit Ben Vander Plas for a pick-and-pop three, then scored on consecutive floaters and assisted a lob, and the score was knotted at 63.

Ohio was up 71-68 after Preston got to the free-throw line and made one of two. But Illinois did not panic. Dosunmu drove to the rim and missed, but got his own rebound, and relocated for a wing three, which he drained to tie the game. Preston however countered with a perfectly placed lob pass over the head of Giorgi Bezhanishvili to Dwight Wilson, to give the Bobcats a 73-71 with 35 seconds remaining.

Illinois responded. A Dosunmu-Cockburn pick-and-roll resulted in Frazier being open on the wing. Frazier attacked the closeout, got into the paint, and found Da’Monte Williams wide open on the wing. Williams, who shot just 28.3% from the three, calmly stepped into his shot and swished it, giving Illinois the lead back at 74-73, with 33 seconds remaining. Earlier in the game, Williams passed up an open three from Dosunmu, and Dosunmu let him know about it.

“Come on Monte,” Dosunmu said to Williams. “You’re a great shooter. I’ve seen you put the work in each and every day. Be ready to shoot.”

So when Williams was open on the wing late in the game, he was ready.

But Preston was not done trying to will the Bobcats to victory. They tried to run another pick-and-roll, but Dosunmu fought through it and stuck with Preston. Preston backed Dosunmu down, picked up his dribble in the mid-paint, and faded away, draining the shot over the Illini star to give the Bobcats one final lead. But ultimately, like a quarterback in a late-game scenario, Dosunmu got the ball last and made the Bobcats pay.

Dosunmu led the Illini once again with 27 points and seven rebounds. Cockburn and Williams added double-doubles in the victory with 13 points and 14 rebounds and 11 points and 10 rebounds, respectively. Freshman Adam Miller had another double-digit scoring game with 11 points.

Despite the win, Ohio exposed some flaws that the Illini have. The Bobcats consistently found success in the high pick-and-roll against Cockburn and Bezhanishvili, while also only turning the ball over seven times. Conversely, Illinois turned the ball over 16 times. They made only six of their 15 attempts from three and missed nine free throws.

“I’m extremely frustrated with our turnovers,” head coach Brad Underwood said. “That’s something we gotta get out of our system. And they are mental.”

The schedule doesn’t get any easier as Illinois will travel to Indianapolis for the Jimmy V Classic on Tuesday to take on No. 2 Baylor. The game is at 9 p.m. central time and can be watched on ESPN.