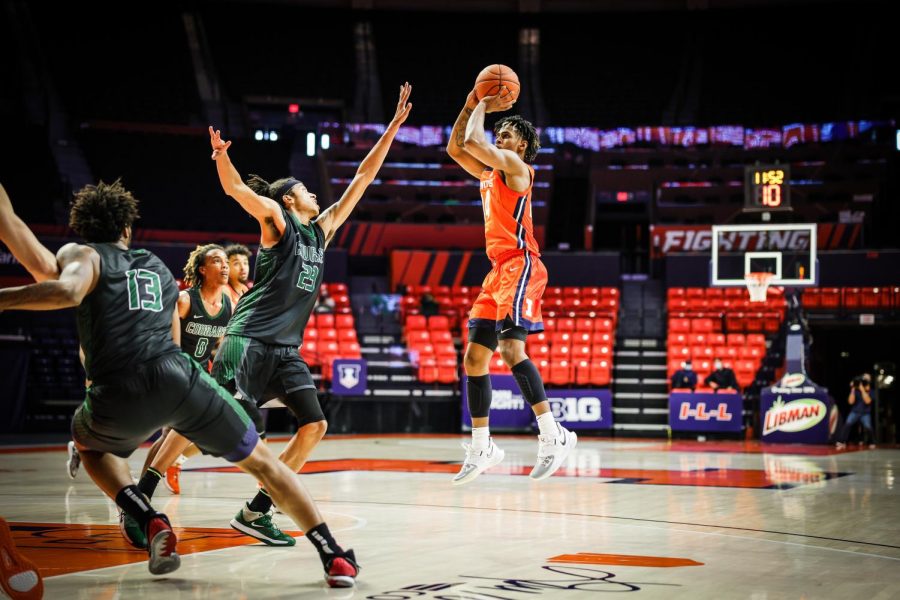 Adam Miller shoots a jumpshot in Illinois’ game against Chicago State on Thursday. Miller was one of many Illini players who excelled on the offensive end in the team’s first three games.

The Illinois men’s basketball team concluded its three-game MTE in Champaign Friday, clinching a 3-0 record with a down-to-the-wire win over Ohio. The Illini dominated in their earlier games with a 62-point win over North Carolina A&T on Wednesday and a 59-point victory over Chicago State on Thursday.

Although the toughest section of the team’s schedule lies in the week ahead, the No. 8 Illini proved their worth, versatility and depth through the first three games. I graded the performances of the eight Illini with the most playing time during the tournament.

This is the most self-explanatory grade I might ever write. Dosunmu was outstanding this week, leading the team with an average of 25.7 points per game. There aren’t many weak points in the junior’s offensive game right now.

His ability to drive and consistently finish with both hands is unmatched; not to mention his Euro step is nasty. His mid-range jumper looks effortless and his three-ball looks much improved. Through three games, Dosunmu is shooting 55.8% from the FG range and 42.9% from deep. Remember, Dosunmu’s three-point average last season was 29.6%.

And, most importantly, the clutch gene has remained in Dosunmu. Heading into the final minute of Friday’s game against Ohio, it looked like the Illini could suffer an upset, but after Da’Monte Williams hit a three-pointer to take a one-point lead, Dosunmu iced the game with a pair of free throws.

Dosunmu is also the team’s third-highest rebounder with 23 while also leading the team in assists and steals with 20 and 3, respectively. Williams sits behind Dosunmu in assists but has just 10.

The highly-regarded, four-star freshman proved he’s prepped to be the next face of the Illini program this week. Miller was unstoppable in Wednesday’s game, scoring six of Illinois’ first eight points and breaking the Illinois freshman debut record previously set by Brandon Paul in 2009. Miller finished the game with 28 points on 10-of-12 shooting from the field, including 5-of-6 from behind the arc.

While his production slowed in games two and three, Miller still found ways to score, averaging 18.0 points per game on 59.4% shooting. The freshman is also finding success at the free-throw line, make eight of his 10 attempts.

Much like Dosunmu, Miller can score in almost every way possible. While his consistent shot was what head coach Brad Underwood was looking forward to the most, Miller proved he has strong handles to maneuver through the lane and put up a contested shot. Despite being a lefty, Miller looks comfortable finishing with either hand.

In his last first game with the Illini, Frazier looked uncharacteristic on offense scoring just six points on 2-of-10 shooting. But the senior hit his stride in game two with 14 points, hitting four threes on seven attempts. Frazier cooled down a bit on Friday but still contributed with eight points.

But for the second year in a row, it’s Frazier’s defense that makes him so valuable to the Illini. Frazier is consistently tasked with guarding the opposing team’s top guard and he succeeded in that task this week.

Against North Carolina A&T, Frazier had four defensive rebounds. In the Chicago State game, on back-to-back possessions, he had a steal and a block, while adding another four defensive rebounds. But, on Friday, with the game on the line, Ohio had one last opportunity to regain the lead with just over a second left. The Bobcats tried screening Frazier on the inbounds pass to Jason Preston, but Frazier instead turned into a defensive back and intercepted the pass and drew the foul seal the game.

The veteran status of Williams is really shining early in the season. Not only has the senior cemented his abilities as an elite defender, but he is also becoming an offensive threat behind the arc. Through three games, Williams has scored 22 points, including six treys. He is shooting a team-high 66.7% from three-point range.

Williams took arguably the biggest shot of the game Friday. When the Illini were trailing the Bobcats 73-71 with 35 seconds left, Frazier drove to the hoop, but kicked the ball out to Williams who was wide-open behind the arc. Williams sunk the three-pointer to give Illinois a one-point lead.

But, Williams’ highest value still comes off the ball. He ranks second in both rebounds and assists for the team, with 24 and 20, respectively. Taking care of the ball has also been a much-needed strength, as he only turned the ball over three times through three games. Williams, however, did have his size disadvantage exploited in the second half of Friday’s game.

Despite recording a double-double in each game this week, Cockburn’s production has been a little underwhelming. The Illini big still struggles with ball security, leading the team with 10 turnovers. After Friday’s game, Underwood expressed his frustration with that aspect of Cockburn’s game right now.

But, the reigning Big Ten Freshman of the Year can still bully his way through the paint as he is averaging 15.0 points per game and a team-high 11.7 rebounds per game. Cockburn had his best performance against North Carolina A&T where he had a major height advantage and put up 18 points on 66.7% shooting. When he gets the shot up, Cockburn is efficient as he is shooting 64% from the field.

Unlike Miller, Curbelo showed flashes of freshman mistakes, which isn’t necessarily a bad thing at the beginning of the season. The four-star guard looked a little shaky to begin Wednesday’s game but slowly found confidence, scoring eight points while dishing out six assists.

Curbelo had his coming-out party against Chicago State, taking control in the second half and finishing with 18 points. Curbelo proved he too is crafty at the hoop and can excel in the transition game.

However, the freshman finished the week with 10 turnovers, tying Cockburn the team-high.

The junior has settled into the role as the backup center and has done a decent job to begin the season. While he still struggles consistently making putbacks and getting crafty in the paint, Bezhanisvili is doing enough to let Cockburn take plenty of rest.

While averaging just under 17 minutes of court time, the Illini big is putting up 5.0 points and grabbing 3.7 rebounds a game. If Bezhanisvili can secure a couple more second-chance shots a game, his value can really increase.

The sit-out transfer from Holy Cross played his first set of games in an Illinois uniform this week. Like Curbelo, Grandison looked a little uncomfortable on Wednesday but found his groove to total eight points, including two three-pointers. At Holy Cross, Grandison shot 35% from deep and the Illini will need that production moving forward.

Grandison’s production quickly declined in the next two games, scoring just two points between Thursday and Friday. However, he grabbed 15 rebounds and handed out four assists through the three games.