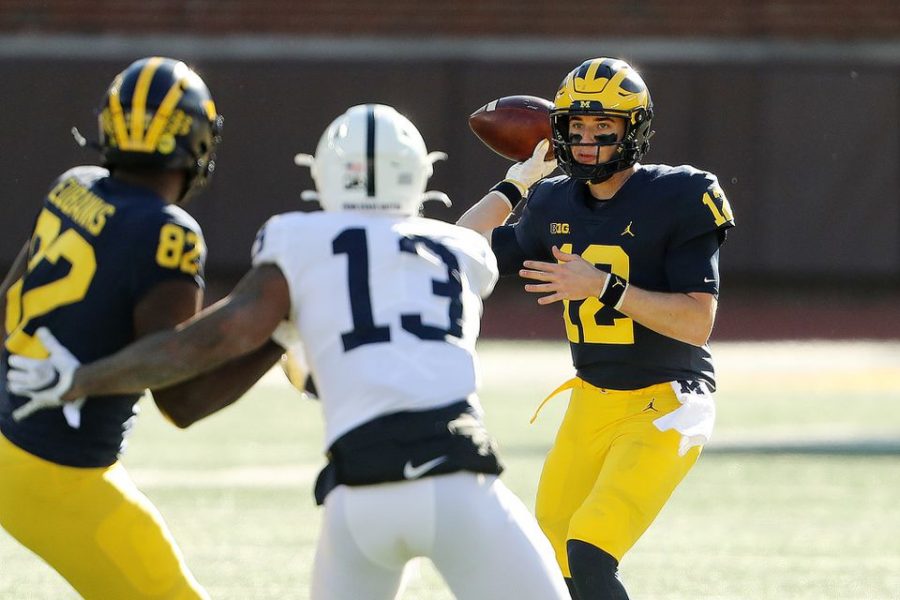 Michigan quarterback Cade MacNamara looks to throw a pass in the first quarter of the game against Penn State at Michigan Stadium in Ann Arbor on Saturday.

After impacting Illini depth charts, COVID-19 has finally managed to get a game canceled. Lovie Smith and company watched football from home Saturday after their “Illibuck” rivalry game with Ohio State was canceled due to climbing Buckeye cases. However, save for the Minnesota-Wisconsin cancellation, Big Ten football was alive and well this weekend.

Behind Keith Duncan’s four field goals and a late forced fumble, Kirk Ferentz and the Iowa Hawkeyes knocked off Nebraska on Black Friday for the sixth season in a row.

In a back-and-forth battle with a struggling Nebraska program, Iowa was able to knock the ball out of Adrian Martinez’s hands while the Cornhuskers were threatening to score a game-winning touchdown.

Scott Frost elected to play both Adrian Martinez and Luke McCaffrey, though the former received more playing time. While the Cornhuskers outgained the Hawkeyes, two turnovers and stalled drives proved to be too much.

Iowa now sits just one game out of first place in the West Division, although its path back to Indianapolis will be tough. Due to a home loss to Northwestern, the Hawkeyes need to win out and the Wildcats must lose their remaining two games.

After an emotional 42-35 loss to the Buckeyes, talks of Buckeye hangover surfaced for Indiana. The Hoosiers shook off the loss and were laser-focused in a gritty 27-11 victory over the Terrapins.

While quarterback Michael Penix Jr. struggled early with Indiana only leading 7-3 at halftime, a 20-0 run in the second half put thoughts of an upset to rest.

After two weeks of canceled games, the Terrapins looked rusty. The game also showcased their struggle with consistency throughout the year with scoring inputs of 3, 45, 35 and 11, respectively.

The Hoosiers’ East division hopes have been revived with the Ohio State cancelations. If the Buckeyes are forced to miss one more game due to COVID, the Hoosiers are a virtual lock to represent their division in Indianapolis.

Somebody had to win. The two struggling blue blood programs battled it out in the empty Big House, with the Nittany Lions walking away with their first victory of the season.

Penn State quarterback Sean Clifford played his cleanest game of the year and led his offense to a balanced attack. But, it was freshman running back Keyvone Lee who stole the show, finishing with 134 yards and a touchdown.

While Penn State expected to compete for a playoff spot this season, they’ll take the win. At 1-5, Penn State finishes up the regular season with Rutgers and Michigan State, two manageable games that can boost its record going into 2021.

Michigan falls to 2-4, and doubts about Harbaugh’s future have increased. Unless Michigan manages to upset Ohio State, the Wolverines are on track for their worst Big Ten record since 2014.

Northwestern’s playoff hopes are all but dashed after the Spartans stunned the Wildcats in East Lansing. Michigan State stormed out to a quick 17-0 lead, digging too deep of a hole for the West division front-runners.

The Wildcats managed to erase the deficit and took a late 20-17 lead, but the Spartans were able to muster enough offense for two field goals and run out the clock to end any realistic chance of a Wildcat victory. A fumble recovery in the end zone with time expiring inflated the score to 29-20 for the Spartans.

While the Wildcats have bottled up Big Ten offenses all season, its own offensive struggles caught up to them today. Indiana transfer Peyton Ramsey was picked off twice and turned the ball over on downs while trying to lead his team down the field for a potential game-tying field goal.

Michigan State has had one the most complex seasons in the conference so far, with games ranging from losing to Iowa by 42 to knocking off a college football playoff contender. At 2-3, the Spartans are scheduled to host Ohio State next week, although the game is in doubt.

While the loss stings, the Wildcats still have a lot to play for. Currently leading its division by a game, the Wildcats are one victory away from clinching a spot in the Big Ten championship for the second time in three seasons. The Wildcats travel to take on the Minnesota Golden Gophers next week.

Rutgers is back — as a competitive program. After going winless in conference play three out of four seasons, the Scarlet Knights now have two wins after knocking off a favored Purdue team on the road.

While Rutgers had a lead after a quarter, Purdue’s offense erupted in the second quarter, taking a double-digit lead into halftime. Big plays, though — a 65-yard passing touchdown and a 100-yard kickoff return — kept Rutgers within striking distance.

Once retaking the lead, Rutgers kept it, and the Scarlet Knights were able to run off the final 5:26 to secure another Big Ten road win.

While the Scarlet Knights are only 2-4, Greg Schiano is a serious candidate to win Big Ten coach of the year. Even in its losses this season, including a triple-overtime loss to Michigan, Rutgers is a much-improved program since Chris Ash’s departure.

After starting the year 2-0, Purdue is on a three-game skid. The Boilermakers have failed to close out teams in three straight games decided by a single possession, though Purdue fans would point out a bad call cost them the Minnesota game. The Boilermakers look to snap the skid against the Cornhuskers next week.

No. 16 Wisconsin vs Minnesota: canceled

Before Saturday’s cancelation, the two programs had the longest-running rivalry in the country, meeting for 113 years in a row. While the Badgers get to keep Paul Bunyan’s Axe for another season by default, the cancellation has resulted in Wisconsin all but being eliminated from conference title hopes.

While conference title hopes and playoff hopes are over, the Badgers still have the respect of the committee and have the chance to secure a major bowl if they win out. Wisconsin, barring another cancellation, are scheduled to take on No. 12 Indiana and No. 24 Iowa.

The Golden Gophers hope to return to action after COVID cases forced them to cancel their rivalry game. P.J. Fleck and his team are scheduled to host division leader Northwestern and hope they can play spoiler.

No. 4 Ohio State vs Illinois: canceled

The Buckeyes’ conference and playoff hopes are on life support after having their second game canceled in three weeks. One more missed game would result in Ohio State being ineligible for the championship game, paving the way for the Hoosiers to steal their spot.

While the conference picture is clear, their playoff hopes, even without a conference title to their resume, are trickier. There’s no requirement to win a conference title to be in the playoff — i.e. Ohio State in 2016 — as they select the four best teams in their view. However, the Buckeyes rather not take the chance.

Illinois probably dodged a bullet of a loss, and their bowl hopes are alive and well as long as they pull off a few more wins. The Illini host the Hawkeyes next week before traveling to Evanston to take on the Wildcats. Add in an additional eighth game during Championship Week and the Illini have the chance to secure back-to-back bowls for the first time since 2011.