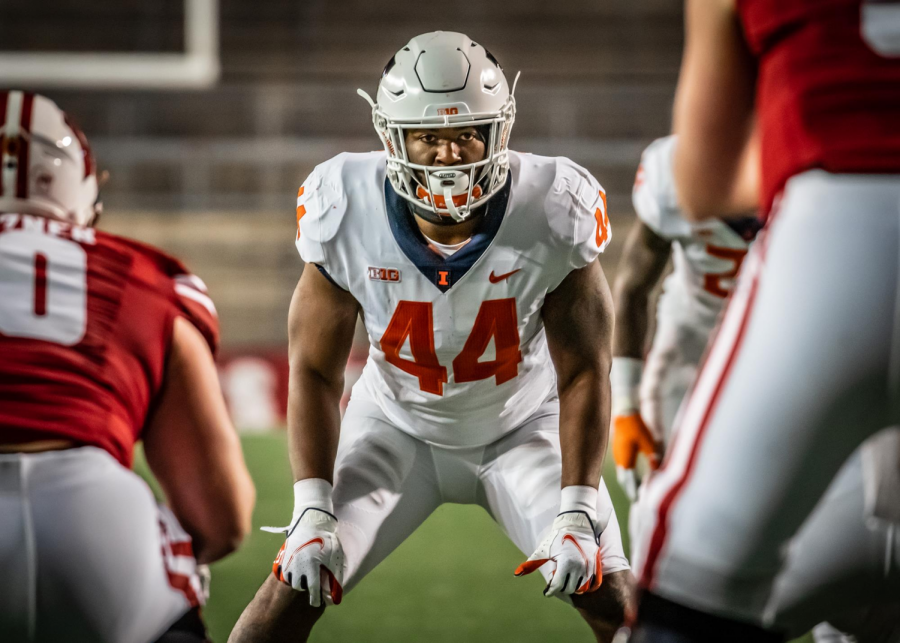 Sophomore Tarique Barnes looks forward as he stands on the line of scrimmage during the game against Wisconsin on Oct. 23. The Illini lost 45-7.

The Illini were faced with an unfortunate situation last Friday night when they received news that their scheduled game Saturday against Ohio State had been canceled. The Buckeyes had multiple positive COVID-19 cases in consecutive days prior to the game, leading school officials to cancel the contest.

“As we went into this football season, we knew that we were gonna need to be flexible, that things could change quickly, and that’s exactly what happened for us this past week,” said head coach Lovie Smith on Monday. “We were really excited about playing one of the best teams in the country, at home and all of that, but the decision was made by the league. We moved on quickly.”

Speculation on social media occurred all week. Rumors of an outbreak spread via Twitter, and the most head-scratching news was when Ohio State announced it wouldn’t arrive in Champaign until about three hours before kickoff.

Unsurprisingly, the team wasn’t happy to not be playing. The season is already limited, and they would have gotten the chance to face one of the top teams in the country.

Ohio State was ranked fourth in the college football playoff rankings the week of Saturday’s contest, which always draws attention. And for the Illini, seeking a second-straight year with an upset at home, the chance to play one of the best teams in the country was an opportunity the whole team was looking forward to.

“Obviously I think everybody was disappointed we didn’t get a chance to play,” said offensive coordinator Rod Smith. “Any time you get a chance to compete against what is assumed to be the best team in the conference at the time, you want to take your swing.”

On top of the disappointment of not being able to play, other disadvantages came with their game being canceled.

Illinois was coming off its second-straight victory, a dominant win over Nebraska in Lincoln, which was the best the team had looked all season. Momentum is key in any sport, and that factor was lost with the week off.

“You want to try to sustain as much momentum as possible, and the way to do that is you play,” Rod said. “We’re gonna get tested, we’ll see how much momentum we can continue to keep carrying and how much execution we can do.”

In a regular season, each team gets at least one bye week, but those are known when the schedule comes out. This week’s cancellation was impossible to prepare for.

Although negatives came with the week off, the team found positives from not being able to play this past Saturday.

Lots of players were banged up after the game against Nebraska, so an extra week of practice and no competition allowed Illinois to get healthier.

With senior offensive lineman Alex Palczewski and sophomore linebacker Tarique Barnes both receiving season-ending surgery this past week, Illinois needs to be as healthy as possible moving forward to stay competitive.

“We were holding our breath because if you get one more guy injured at a certain position, you’re playing guys that never took a snap there or you’re moving guys in voids,” Rod said. “The positive out of (not playing) was we can get a couple of more days of rest and try to get some guys that are banged up maybe healed up.”

Despite losing momentum after a dominant offensive performance against the Cornhuskers, the time off also allowed Rod Smith and the offense to prepare for a good Iowa team this Saturday.

Two years ago in Champaign, the Hawkeyes shut out the Illini and won the game 63-0, so the whole team is hungry to improve and put enough points on the board to beat Iowa for the first time since 2013.

“We constantly try to evaluate where we can get better and move forward from there,” Rod said. “(Having a game off) definitely gives us that possibility. … They’re extremely well-coached, they play extremely hard, they’re strong, they’re physical. I mean they’re just a very good football team.”

With time off, players could have taken the day to themselves and not focus on football, but that didn’t seem to be the case for the Illini.

Adams said the team was given options as to what to do with their time, but he chose to immediately continue working and prepare for Iowa.

“I stayed up here and watched some film,” Adams said. “It gave me some time to just look at my game, what I need to improve at (in) upcoming weeks. Iowa is a great team coming to town this week so we gotta be prepared for them.”

All members of the team are now focused on Iowa, a longtime rival who is on a six-game win streak over the Illini.

Although Illinois was four touchdown underdogs heading into the Ohio State game, it’s understandable why players would be disappointed to not be given a chance to compete. With the cancellation, though, it gives them time to prepare for their senior day on Saturday when they host the Hawkeyes.

“We moved on quickly to Iowa,” Lovie said. “We met on Iowa, and we’ve been on Iowa ever since. It doesn’t take an awful lot for us to get fired up about playing the Hawkeyes, they embarrassed us here the last time we played (them) at home. … I think it’ll be a big challenge for us.”