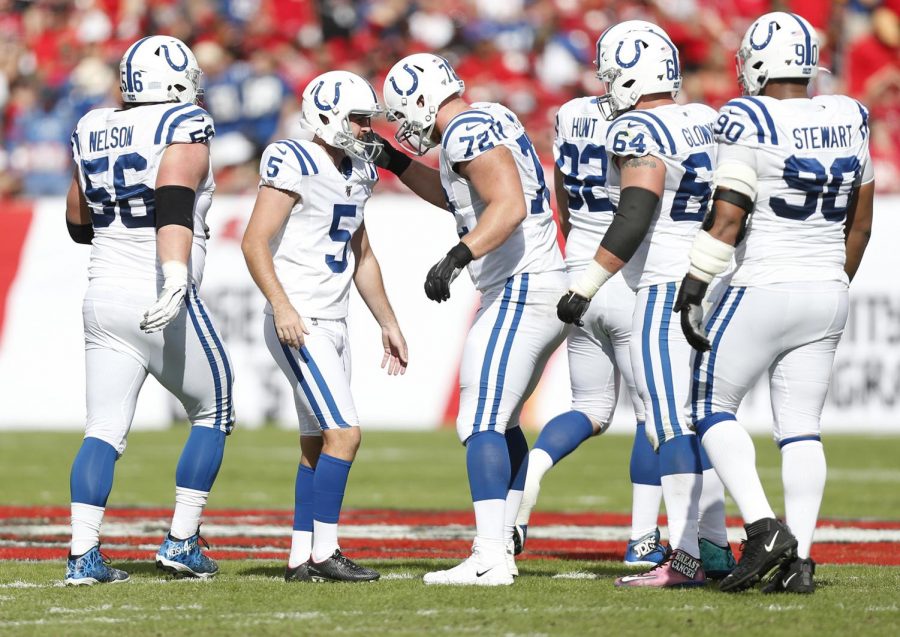 Illinois’ season thus far has been full of ups and downs, and though the team struggled early on with a three-game losing streak to start the year, back-to-back wins over Rutgers and Nebraska have perhaps turned the tide. Though some players many fans projected to get drafted haven’t been on their A-game this year, consistently dominant outings from other stars have potentially paved a path to the NFL draft for the Illini program after a one-year hiatus. Let’s take a look at how 11 former players have fared over the past five weeks.

After getting the first start of his career in Week 7 against the Denver Broncos, Allegretti has started five straight games, filling in for injured Mitchell Schwartz on the offensive line. The former Illini has only missed two offensive snaps since notching his first career start, helping the Chiefs pick up six consecutive wins and extend their lead atop the AFC West to four games. Sitting at 10-1, Kansas City is just 0.5 games back from the undefeated Pittsburgh Steelers for the one-seed in the AFC playoff race.

Sitting out the first three weeks due to injury, Fejedelem hasn’t seen much playing time on the defensive side of the ball in his first season in Miami, though he has made at least one tackle in every game but one thus far. The former Illini got the most playing time on defense (five snaps) during the Dolphins’ Week 10 win over the Los Angeles Chargers, though his most productive game came against the Broncos in Week 11, making three total tackles in the team’s 20-13 loss.

Hardee has yet to play a snap after suffering an injury during the team’s Week 8 win over the Chicago Bears, though he made two total tackles before leaving the game. The four-year NFL veteran was added to the injured reserve list with a groin injury, and there’s no timetable for his return.

Karras sees the most consistent playing time of the group, as he has started every game and hasn’t missed a snap so far for the Dolphins. Karras has already made a significant impact in Miami, helping lead the team to its best start since 2016. The 7-4 Dolphins are in second place in the AFC East and sit one game back from the first place Buffalo Bills.

Jacksonville signed McLaughlin off the Minnesota Vikings’ practice squad to fill in for injured kicker Josh Lambo. The former Illini kicker successfully converted both extra-point attempts and went two-for-two on field goals from 52 and 31 yards in the team’s 24-20 loss to the Green Bay Packers in Week 10, while he made his only attempt from 41 yards in the Jaguars’ 27-3 loss to the Steelers in Week 11. McLaughlin is now listed on the COVID-19 list and did not participate in Week 12.

Mercilus has started nine of the 10 games he has played in and has helped the team pull off back-to-back wins for the first time this season. Making at least one tackle in every game but one, Mercilus is one of the most experienced members of this Texans team, as this is his ninth year on the team. The former Illini made four total tackles in the team’s 10-7 loss to the Cleveland Browns, while he made one tackle in each of the last two games, including a sack in the team’s 41-25 win over the Detroit Lions on Thanksgiving.

After recovering from a quadricep injury following the Bills’ opening weekend win against the New York Jets, Phillips returned in Week 9, playing seven snaps on special teams. Unfortunately, Phillips re-injured his quad and is back on the injured reserve list, and there is no timetable for his recovery.

Turner has not played a snap for the Cowboys since the team’s Week 4 loss to the Browns, though he is still listed on the roster. It’s unclear whether he will get any more playing time as Dallas pushes for a playoff spot in an underperforming yet tight NFC East division.

Like Turner, Ward has not seen any playing time over the past five weeks. He did not participate in practice this week, as he is one of 19 Ravens players currently on the COVID-19 list. If he is able to be reactivated in the near future, he may see more playing time due to a large number of teammates unable to play.

Despite not seeing many snaps on defense, Wilson is still productive on special teams, as he has made one tackle in each of the past six games he has played in. Wilson recovered a fumble to set up a field goal during the team’s 34-31 victory over the Packers in Week 11, while he saw 13 snaps on defense in Week 12 against the Tennessee Titans, the second-most he’s seen this year.