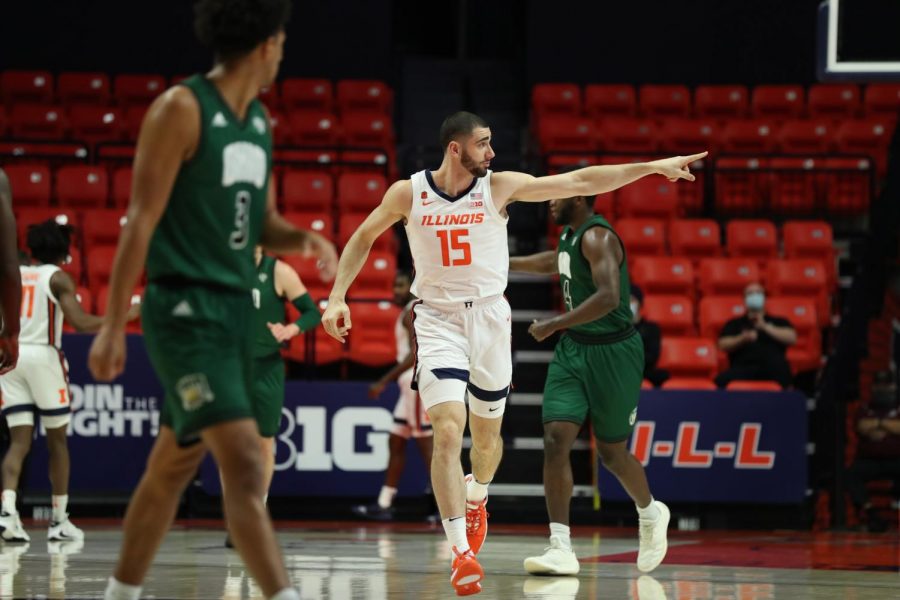 Junior Giorgi Bezhanishvili points towards the sideline during the game against Ohio on Friday.

When you’re playing the No. 2 team in the country, your bench players cannot be more productive than your starters if you’re expecting to win. But, that’s what happened Wednesday night as No. 5 Illinois fell to Baylor 82-69.

With one of the best defenses in the country, Baylor contained the versatile Illini offense, especially in the first half. Even when the Illini got going in the second half, it wasn’t enough to keep up with the Bears’ consistent production.

The Illini were outrebounded, failed to create momentum and couldn’t contain a deep Bears offense. I graded the performances of the eight Illini players who saw the court the most in Illinois’ first loss of the season.

The junior star put up 18 points in the loss, but it really didn’t feel like that much considering he shot 33% from the field. Dosunmu was shut down in the first half, making just one of his six shot attempts. While the Bears were consistently bringing extra pressure to Dosunmu, the Illini rely on him to shine in big moments.

Against the No.2 team in the country, Dosunmu needed to have an above-average game and challenge the Bears with his crafty dribbling and perimeter shooting, but both of those aspects seemed to be average, if not below average Wednesday.

Dosunmu did contribute a team-high five assists and six rebounds but also turned the ball over three times. It is so early in the season, and Dosunmu will definitely benefit from having film of playing against an elite defense when crunch time comes in March.

After an outstanding first three games, averaging 18 points, Miller was nearly silent against Baylor. The freshman made just two shots from field goal range and was 0-for-6 from three-point range. Miller also didn’t contribute much off the ball with just one assist and two rebounds.

The Bears’ defense proved to be too tough for Miller as his versatility on offense suffered from tight and disciplined defensive play. It definitely is important to remember Miller is a freshman even though he didn’t look like one in the Illini’s first three games.

To really succeed this season, however, the Illini need Miller to be the guy who can step up with his jump shot when his teammates’ shots aren’t falling.

The senior really struggled against Baylor, specifically with taking care of the ball. Frazier had a team-high five turnovers. Frazier, one of the Illini’s top defenders, struggled with tight closeouts on the Baylor offense.

Frazier’s scoring productivity was similar to the first three games, though. Coming into Wednesday night’s matchup, he was averaging 9.3 points and against Baylor Frazier scored eight points on 50% shooting.

The biggest thing for Frazier to improve on before Big Ten play is better discipline on defense and better ball security, two things that the senior improved on last season.

While no one was great today, Williams did his job for the most part. The senior continued to keep the defense honest, scoring six points on 2-of-3 shooting from the field. While he isn’t the most talented or consistent scorer, Williams has proved he can be an offensive threat when needed.

However, Williams, like the rest of the Illini, let up on defense too much in the second half while the Bears continued to force the Illini into bad shots. Williams did contribute a team-high seven rebounds and had just one turnover.

The Illini big man honestly let his team down on Wednesday. Cockburn is supposed to be on of the team’s top scorers every night, but only put up seven points with just four shot attempts. This was of course attributed to his four fouls, two of which he committed early in the first half.

The early foul trouble caused Cockburn to be on and off the court, never establishing an offensive flow. His defensive production also took a hit, bringing down just four rebounds. The limited presence down low led to 38 points in the paint for Baylor.

The Bears also grabbed 16 offensive rebounds and scored 24 second-chance points. It’s obviously hard to play the “what if” game, but I have a hard time believing those numbers wouldn’t be significantly lower if Cockburn had played more than 18 minutes. The bottom line is Cockburn needs to play smarter going forward to put his team in a better chance to succeed down the stretch.

Surprisingly, the junior forward outplayed Cockburn in the post against Baylor. Behind Dosunmu, Bezhanishvili scored a season-high 15 points after averaging just five points in the first three games. Bezhanishvili also played eight more minutes than his previous average time on the court, potentially a contributing factor to his slow second-half production. But, the junior was the sole reason the Illini were in the game at halftime as he was the only consistent force on offense through the first 20 minutes.

The junior did shoot 70% from the field and had two blocks, but did also get into some foul trouble with three. If Bezhanishvili can continue to bring that production off the bench, the Illini can turn into a deeper team in the paint in a hurry.

One freshman struggled and another one thrived, the latter being Curbelo in the top-five matchup. Curbelo put up 11 points against the Bears, with every point coming in the second half. He added four assists and only turned the ball over once, something he struggled with last week.

Viewers also got a taste of Curbelo’s elite passing abilities as he was able to find Cockburn and Bezhanishvili for a couple of easy dunks and layups after he forced the defense to crash on him. It wouldn’t be surprising to see Curbelo’s minutes increase in the coming weeks.

While Hawkins received the best grade, it’s really because he was only on the floor for five minutes. But, in that short time, he showed hustle and toughness, adding three rebounds including two on the offensive end. He also had one block.

But, he failed to convert on offense when given the chance, going 0-for-1 from FG range and missing both free throw attempts. Adding a little more muscle in the offseason and just understanding the collegiate game will advance Hawkins into a dangerous player for years to come.