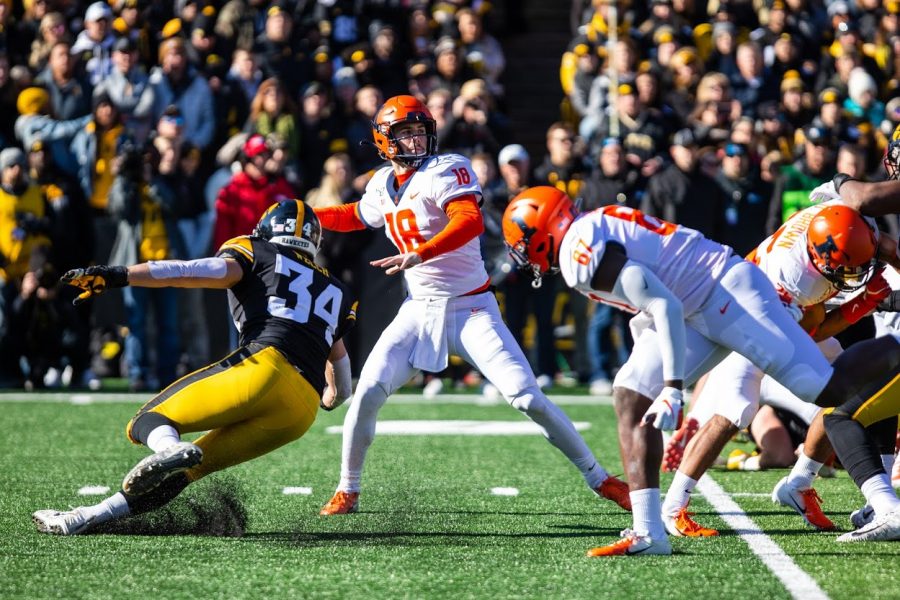 Quarterback Brandon Peters prepares to throw a pass during the game against Iowa on Nov. 23, 2019.

It’s been six seasons since the Illini have scored a point against the Hawkeyes in Champaign. In 2016, Lovie Smith’s first team was shut down by Josey Jewell and the Hawkeyes, losing 28-0. Their 2018 matchup, however, was the lowest point of the Smith era.

Despite having bowl eligibility on the line, the Illini — on its frigid and rainy Senior Day — looked lifeless, as the Hawkeyes blasted Illinois 63-0, ending all hopes of a bowl appearance. After the season, Smith received an extension as Whitman decided to go all-in on his hand-picked successor to Bill Cubit.

While the program has improved since that Senior Day loss, the Illini still haven’t proved they can consistently knock off winning programs. However, a win over the Hawkeyes at home can help further the narrative that Smith is starting to get things rolling in Champaign.

“(Iowa) has shown the last four years we have played them. We haven’t,” Smith said.

In Illinois’ defense, the 2019 meeting between the two was very competitive. Coming in hot off four straight victories — including wins over Wisconsin and Michigan State — Illinois’ defense came to play, holding Nate Stanley’s offense in check. However, game management blunders before halftime and a couple of Brandon Peters turnovers allowed Iowa to escape with a 19-10 victory.

That loss sparked a six-game losing streak for the Illini, which nearly derailed Smith’s program. It made the Wisconsin win look like the biggest fluke, let alone the whole 2019 season. While COVID-19 certainly had an impact on Smith’s plan to showcase his best team yet, they were a shell of themselves early on.

However, Illinois brought some of its swagger back with back-to-back wins over Rutgers and Nebraska. Although slim, back-to-back bowl game berths remain a possibility if Illinois takes care of business over the next few weeks.

What would that accomplishment mean to this program? It would mean it’s a program that can sustain tough times. It would mean the program can replicate success and not let a little hype get to their heads. It would mean Smith has recruited talented players — transfer portal or traditional recruiting — to come play for a non-traditional power.

But ranked teams are the roadblock to another bowl appearance, and beating an Iowa team for the first time since 2008 will require Illinois to win in the trenches and have good quarterback play.

“They’re really good in the secondary,” Brandon Peters said about Iowa. “(I have to get) the ball out of hand quick, making the right decisions and not be hesitant.”

Iowa has been the hottest team in the Big Ten since being upset back-to-back weeks to start the season, having even a larger point differential than Ohio State. For all the criticism of Iowa head coach Kirk Ferentz, he’s built one of the most consistent programs in the Big Ten, missing out on a bowl game only twice since 2001.

However, that doesn’t mean Ferentz dominates the Big Ten. They usually lose at least three to four games a season, though the Illini haven’t been able to figure the coach’s team in over a decade.

Granted, the Illini had Tim Beckham and Bill Cubit leading a program lacking talent and confidence in the past. Those teams lacked identity. Lovie Smith at least has an identity: forcing turnovers. And now, the Illini have their most talented quarterback since 2013 leading the way.

It’s hard to remember, but the Illini were actually in the running for a West Division crown last season minutes before the Iowa kickoff. At 6-4, color commentator Kirk Herbstreit even picked the Illini to upset the Hawkeyes in Iowa City. With a 2-9 Northwestern team on deck, it was conceivable that the 2019 team could’ve gone 8-4 and played in Florida for a New Year’s Day Bowl.

However, the team stumbled against Iowa. Then, the 2-9 Northwestern team dominated a Brandon Peters-less Illini team before Cal topped off the season with a 15-point victory. If the Illini managed to knock off the Hawkeyes, the trajectory of a then-hot Illini team would have skyrocketed.

Now, the Illini have a chance to recreate that moment one year later. Fresh off two straight victories, a third over Iowa would wipe away the dreadful 0-3 start. But, can Lovie finally get past Kirk, who can easily restart Illinois’ decline?