Illinois closes out 2020 regular season home schedule against No. 19 Iowa 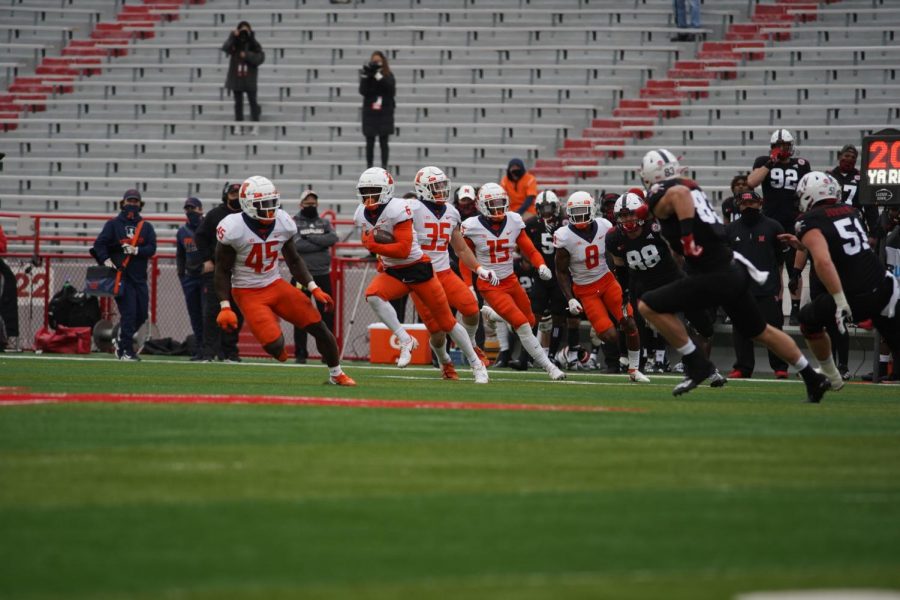 Defensive back Tony Adams runs the ball during the game against Nebraska on Nov. 21.

Illinois will play its final home game of the regular season Saturday, as it hosts the Iowa Hawkeyes on Senior Day at 2:30 p.m.

Last year, the Hawkeyes hosted the Illini in Iowa City and won the game 19-10. The year prior, Iowa won at Memorial Stadium 63-0, Illinois’ largest defeat since 1906.

“It’s not easy for us to get fired up about playing the Hawkeyes,” said head coach Lovie Smith. “They embarrassed us here the last time we played them at home. Last year, we played them a lot better, but we haven’t been able to get a win for a period of time.”

The Illini are coming off a week off, as their scheduled home game against Ohio State was canceled less than 24 hours before kickoff due to a COVID-19 outbreak within the Buckeye team. The week before, Illinois won at Nebraska, 43-25, behind a dominant all-around offensive performance.

Iowa is coming off a 26-20 home win against Nebraska. Sophomore running back Tyler Goodson led the Iowa offensive attack, rushing for 111 yards on the day.

Despite losing former quarterback Nate Stanley to graduation after 2019, the Hawkeyes still have a strong offensive attack that has performed well this season. After losing its first two games, Iowa won the next four and is averaging just under 38 points per contest.

“They play hard, you know what Iowa’s gonna bring,” said senior defensive back Tony Adams. “They gonna bring toughness, they’re gonna play physical and they gonna do what they do, so we gotta be prepared and bring our big boy pads this week. ”

The running back duo of Goodson and senior Mekhi Sargent has been the backbone of the Hawkeye offense in 2020. Sophomore quarterback Spencer Petras has dealt with consistency issues, but Goodson and Sargent have been able to show up for their team when it matters most.

As it seems to be every year, the Iowa defense has been consistent and dominant again this season.

The Hawkeyes haven’t allowed more than 21 points against so far this season, allowing an average of just under 16 points a game. With Kirk Ferentz as head coach and strong players all across the defense, Illini offensive coordinator Rod Smith knows Iowa will give them their best on Saturday.

“They’re extremely well-coached, they play extremely hard. They’re strong, they’re physical,” Rod said. “They’re just a very good football team. … They have a system, they run it and they’re damn good at it.”

Illinois head coach Lovie Smith announced earlier this week that senior offensive lineman Alex Palczewski and sophomore linebacker Tarique Barnes both underwent season-ending surgeries. Despite those two absences, no other notable players are expected to be out this Saturday.

Illinois hasn’t defeated Iowa since 2008 and would love to pick up their first victory over the Hawkeyes in over a decade on Saturday. Riding a two-game win streak, looking back on the 63-0 home loss against Iowa two years ago and celebrating senior day this Saturday, the Illini are as hungry as ever to pick up another win this week.

“Our upperclassmen have not beaten Iowa since I’ve been here, so that has to give you added motivation,” Lovie said. “They embarrassed us the last time we played at home. … Looking forward to the challenge this week.”