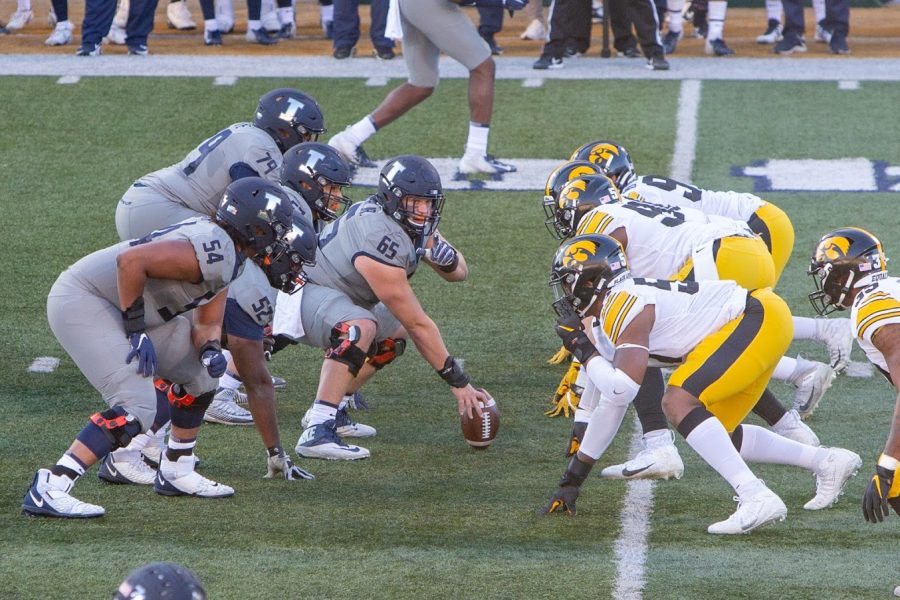 The Illinois offensive line prepares to hike the ball during the game against Iowa on Saturday. The Illini lost the game 35-21.

Last time the Iowa Hawkeyes played football at Memorial Stadium, the game ended 63-0 in favor of the Hawkeyes on a cold, gloomy Saturday afternoon. This time, Illinois managed to score, but still not as much as Iowa as the Hawkeyes won 35-21, pushing Illinois’ record to 2-4 on the season.

Illinois’ hot start, a quick 14 points in the first 17 minutes, was not enough as Iowa went on to score 35 unanswered points before Illinois reunited with the endzone on an Isaiah Williams touchdown pass to Sandy Carlos with 24 seconds left to play in the game.

Battle of the Trenches

Coaches say it all the time: The game is won and lost at the line of scrimmage. With two teams who thrive on a successful running attack, the phrase rings even more true. Early in the game, the Illini won the battle. They made Iowa punt from inside its own 25-yard line on its first four drives, and Illinois scored on its first and third drives of the game. This put the Illini up 14-0 as they looked to be rolling. Their fourth drive is where the Illinois offensive production ran dry, being forced to punt in six straight drives. On Iowa’s end, they scored on four straight drives and capped the fourth with a touchdown and a two-point conversion, putting them up 21-14.

These drives were determined by who won the offensive line. The Illini offensive line opened up running lanes early and gave Peters enough time to make throws downfield early. Illinois’ defensive line stopped the run and pressured the quarterback which forced Iowa to punt. That flipped halfway through the second quarter, as Iowa’s offensive line shut down the Illinois defensive run stoppage and the Iowa run game had its way. This set up easy passes for Iowa’s quarterback Spencer Petras to dice up Illinois as he had 133 pass yards in the second quarter alone.

To start the game, Peters was automatic. Peters completed his first eight passes for 101 yards and two touchdown passes. He controlled the game, looked poised in the pocket, and both of his touchdown passes were highlights. His first touchdown pass, to Daniel Barker, was in a perfect hole away from the safety but not too close to the dropping cornerback. His second was at the end of the third drive, he floated a ball to Josh Imatorbhebhe in single coverage and Imatorbhebhe rewarded him.

With Illinois up 14-0, the game looked very winnable for the Illini. That might have been true, but after starting 8-of-8, Peters finished 2-of-10 for 15 yards. Quickly, a quarterback who was seemingly unstoppable in his first game and a half after his COVID-19 diagnosis, looked very beatable.

After his first drive in the fourth quarter, Peters was replaced by redshirt freshman Isaiah Williams, who led Illinois to its first win of the season against Rutgers. After the game, head coach Lovie Smith said it was because Williams provided a spark on offense.

Shout out to Isaiah Williams

On Saturday, Williams got his first substantial playing time since he won his first start at Rutgers in week four, and while his stat line might not totally reflect it, he slightly balled out. He finished the game going 7-of-16 with 83 passing yards, 38 rushing yards and a passing touchdown. His last drive looked great as he completed four passes for 64 yards and a touchdown.

While he missed nine throws, many of those were either right on spot with good defense or off by a yard or two. With slight adjustments, Williams’ stat line could’ve looked a lot better. While no one knows the future quarterback situation for the Illini, this fourth quarter showed Williams can definitely be more than a running QB, and with development, he can hit crucial throws.

Williams’ performance can be summed up in a quote from running back Chase Brown.

It might be cruel to say the offense fooled us, but expectations were high after scoring twice in three drives. Expectations were not met as the game continued, though. The plays Illinois was capitalizing on in the first quarter just did not continue through the game. Lovie talked about how Iowa didn’t really change much, they just started to execute. Execution on both sides of the ball is what Illinois benefited from against Nebraska and it looked like it was going to happen again after the first quarter, but execution without consistency leads to underperformance.

Underperformance is something Illinois has had a lot of this year. After every loss, Lovie talks about how disappointed he is. This offense was built to score points consistently which didn’t happen on Saturday, and it only happened really one time this year: Nebraska. That is one of the reasons this team sits at 2-4.

After the game, Brown talked about how the team that showed up after the first quarter wasn’t who Illinois was. That in practice they were better and they were ready for Iowa. While that may be true, execution simply showed differently.

After this loss, the best this team can hope for is a 4-4 record, which is not an improvement from last year, but at least it’s not a step back. But, they will need to score often against Northwestern next week to have a chance.

The first four drives had Illinois’ defense looking elite and up to the task of stopping the run-heavy and monotonous Iowa offensive attack. They were controlling the line of scrimmage and getting to Petras early and often. After that, everything changed. The Iowa offense scored on six of its next seven drives, putting up 35 points with no real contest.

For the first time all season, Illinois did not force a turnover, which they rely on heavily. It seemed like through most of the second half, the defense could not catch a break. Without turnovers, this defense doesn’t look like it can sustain itself. Takeaways are all about opportunity and execution. When the opportunity is there, Illinois usually capitalizes. They will no doubt look for those opportunities in the next two games, but if those opportunities for takeaways don’t come, it could be a similar result against a good Northwestern team next week.