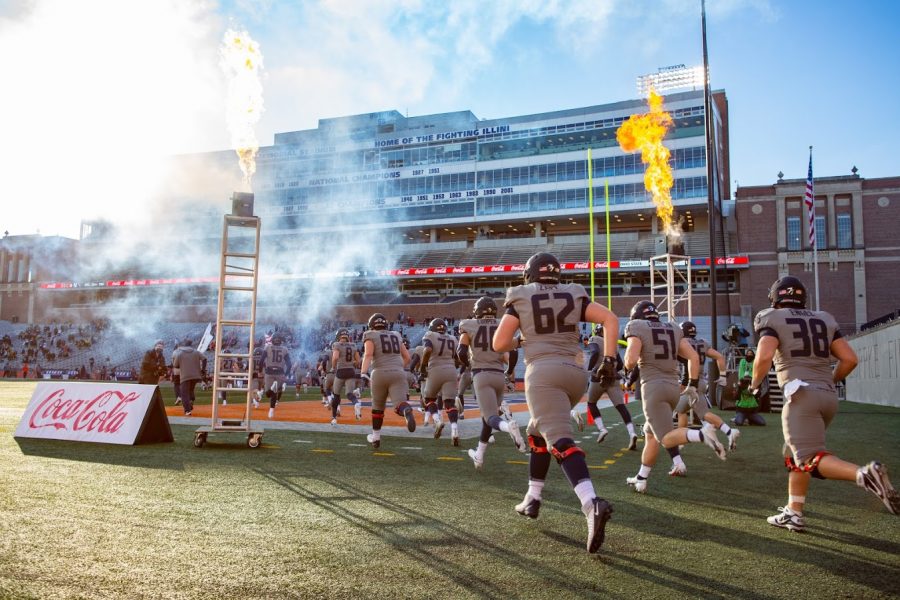 The Illinois football team takes the field at Memorial Stadium before the game against Iowa on Saturday.

Saturday’s loss to Iowa was the epitome of Illinois football. The Illini had a strong, almost flawless stretch of play — enough to raise fans’ hopes — then did nearly everything to throw that stretch away. The result: another tick in the loss column and another step closer to the edge for this program.

This seems like a common theme that’s been established during the Lovie Smith era. As I’m watching games from the press box or my apartment, I scan Illini Twitter between plays or during timeouts. There’s always a point in the game where the team offers a glimmer of hope and Illini nation erupts, tweeting hopeful gifs, “We want Bama” or even an “Illinois football is back.”

But then, the inevitable happens. The Illini crumble, losing steam on offense and letting the opposing quarterback get comfortable, and we’re left questioning the legitimacy of this team.

I don’t think Brown is lying by any means. I believe Saturday’s offensive production through the first 17 minutes — 148 yards and two touchdowns — is what this team is capable of every week.

There is no denying there is talent on this roster. Brandon Peters is a solid Big Ten quarterback who sometimes looks like a dual-threat option and has a strong arm. He has talented targets, too: Josh Imatorbhebhe mossed a defender in back-to-back possessions Saturday, Daniel Barker is a consistent, big-body threat, Brian Hightower is another big, physical target and Casey Washington can shine in big moments. And when Peters isn’t on, the Illini have a strong second option in Isaiah Williams, who relieved Peters in the fourth quarter, throwing for 83 yards and a score.

That list doesn’t even include running back duo Mike Epstein and Brown, who are each averaging over 65 yards on the ground per game and over 5.5 yards per carry. Both backs are speedy, strong and find the end zone well. That’s not even mentioning an all-star offensive line full of veterans.

And while the defense has been very shaky this season, they contained Iowa early and even got consistent pressure on Spencer Petras through the first few drives. Then, the offense started to stall, leaving the defense with minimal time to rest and resulting in a tired and depleted second-half performance.

So if there’s talent and potential on the roster, what’s the problem? Why can’t this team play a full 60 minutes or utilize momentum or make midgame adjustments? I obviously wish I had the answers, but Lovie Smith should.

“I think we’ve made a lot of progress,” Smith said following Saturday’s loss. “I know the final score, I know what the says. … We play our rival next week. We’ll bounce back. Disappointment for the day, but we’ll bounce back.”

Considering this team has lost seven of its last nine games, I’m not convinced by that statement.

Building this team from the ground up for five years, Lovie should be able to change his game plan when momentum starts to shift, he should have depth at every position when injuries inevitably happen. Every team faces injuries and while losing Tarique Barnes and Alex Palczewski a couple of weeks ago then Nate Hobbs and Khalan Tolson mid-game hurts, any Power-5 team that wants to be competitive should have the necessary depth to compensate.

The Illini don’t have either of those things, which is why it’s time to start looking at the coaching staff rather than players or circumstances. Because every week the Illini seem to be on the verge of a program shift, but after each game, the program looks to be quickly sinking into rebuild-mode again.