Lovie Smith looks to send seniors, first recruitment class out with a bang 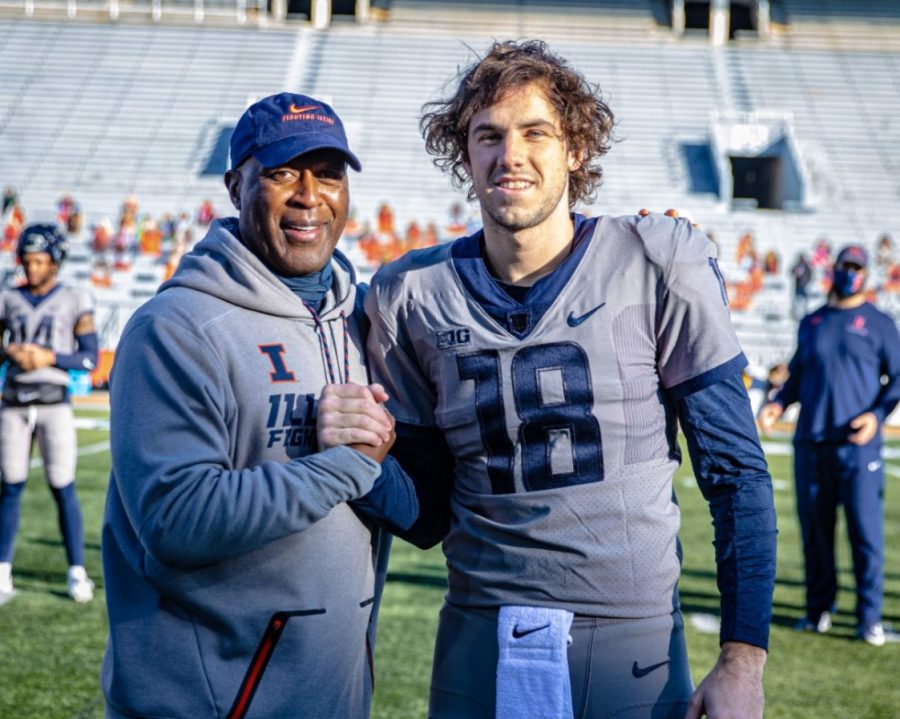 Illinois head coach Lovie Smith poses with quarterback Brandon Peters during Senior Night before the game against Iowa on Saturday.

On Saturday, the Illini celebrated their Senior Day on homecoming against Iowa. The senior class of 2020 was honored before the game like every year, but this unique group of seniors is special to Lovie Smith and his team. This is the first graduating class that Lovie recruited himself and was a team that came in at one of Illinois’ lowest moments in program history.

“It’s hard to do justice to what they’ve done for our program,” Lovie said. “A lot has gone into getting to Senior Day: A lot of practices, a lot of ups and downs, a lot of relationships.”

The year before the class of 2020 came in, the 2016 season, Illinois went 3-9. Three wins were the Illini’s lowest in a season since 2012. When they were freshmen, things only got worse, declining to a 2-10 season and failing to win a Big Ten game.

That 2017 season, many true freshmen stepped into bigger roles than expected due to injuries and a lack of talent from upperclassmen. Instead of quitting, transferring to another school, or giving up on the program, the current seniors committed to bettering themselves and the team and worked hard to improve Illinois football.

In 2018, with more members of the class playing significant minutes, Illinois got better. The Illini improved their overall record by two wins to reach 4-8, including two conference wins in dominating offensive fashion.

The offensive improvements over the years have largely been due to an offensive line that has proved to be one of the conference’s best. Many players on the senior-dominated line in 2020 had been playing big roles since early in their college careers, and they have been able to consistently improve their performances.

Illinois’ starting offensive line at Wisconsin to open the 2020 season, before COVID-19 and injuries hit the team, included Vederian Lowe, Doug Kramer and Alex Palczewski, each of which played significant minutes as freshmen and developed as much as anyone in the 2020 class.

Lowe, Kramer and Palczewski have been around the team over the past four years as much as anyone, and they have impacted Illinois football in more ways than one since coming in.

“You wanna check the box off on them doing things the right way, and that’s exactly what we’ve gotten from those players. … It’s a coach’s dream,” Smith said. “I love being around them, just count on them, having confidence in them. … They show up every day, they know what I’m gonna say and the message to take to the rest of the team.”

Coming into the 2018 season, Lovie Smith and his staff were able to use the transfer portal to recruit players (now seniors) that helped make an impact immediately. Quarterback Brandon Peters and wide receiver Josh Imatorbhebhe filled into starting roles from day one and were big contributors to the success the Illini achieved when they began playing.

In 2019, Illinois started similarly to how they had been the last half-decade, with two non-conference wins and early Big Ten losses. But, the college football upset of the year over sixth-ranked Wisconsin propelled a four-game winning streak for the Illini, capped off by a comeback win in one of the most exciting games in all of football that year in East Lansing against Michigan State.

After falling down 28-3 in the first half, Illinois came back and won the game with a touchdown in the final seconds from Peters to then-sophomore Daniel Barker. But it was the Peters-to-Imatorbhebhe connection that accounted for two of the biggest three plays of the game, including a deep throw on fourth down during Illinois’ final drive of the game to keep the team’s chances alive.

The Peters-to-Imatorbhebhe combination has been a major spark for the Illinois offense. In multiple games over the past two seasons, Imatorbhebhe has come up with big catches from Peters, giving Illinois a legitimate quarterback-wide receiver combo to work with.

“There’s such a comfort level there between those two,” said offensive coordinator Rod Smith. “I think there’s a connection there, I think they’re both good for each other. … If we get man coverage, one-on-one coverage, we always feel comfortable with them to go up and get it.”

The win over Michigan State secured bowl eligibility for Lovie and the Illini, Lovie’s first bowl appearance as Illinois’ head coach. Despite losing in the Redbox Bowl to a very talented Cal team, Illinois put its name back in a bowl game and was competitive once again in the Big Ten.

The 2020 season got off to a rough start for the Illini with more than 10 players missing games due to the coronavirus, and season-ending injuries to multiple players, including Palczewski, but that doesn’t take away from the success that the current seniors have brought to the table.

Illinois now has more potential draft picks than they’ve had since Lovie began recruiting his own players, many of which have seen action since early in their Illini careers. For some, however, the journey may not be over.

The NCAA is allowing fall athletes an extra year of eligibility due to the coronavirus pandemic, which allows every Illinois senior to potentially come back next year.

Even with the potential of having another year and not knowing who will and won’t be back, Kramer said this Senior Day was treated like it is every year for the Illini.

“Obviously Senior Day, it’s a bit emotional, and you don’t really know what decision everyone’s gonna make at the end of the year,” Kramer said. “So you don’t truly know if it’s Senior Day or not, but you gotta treat it as it is, so it’s emotional playing in that stadium for the last time possibly.”

The Illini lost on their senior day 35-21 to Iowa after taking an early 14-0 lead, but the disappointing loss doesn’t take away from everything the seniors have accomplished over their time at Illinois. There are still two games left to play, and Lovie is hoping to send his guys out the right way this year.

“There are just so many thoughts that go through your mind when it gets down to your last senior day. We’re just thankful, I know I’m thankful to have been around them,” Lovie said. “I like them, and they’ve done an awful lot to help us change how people look at Illinois football. What we can do is just send them off the right way by finishing strong. That’s what they’ll remember as much as anything.”