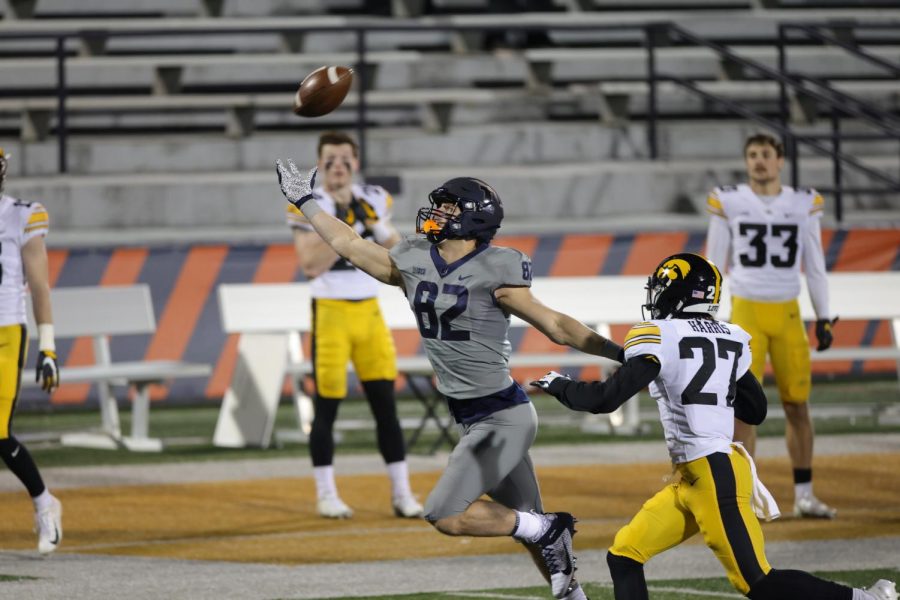 Junior Luke Ford reaches for a pass during the game against Iowa on Saturday.

Illinois will travel up north to Evanston this Saturday to take on in-state rival Northwestern in the final regular season game of the year.

Last season, with almost half their starters out, the Illini lost to the Wildcats at Memorial Stadium on a cold, rainy Senior Day, 29-10.

Illinois is coming off a 35-21 home loss against Iowa, despite taking a 14-0 lead in the second quarter. The Hawkeyes scored 35 unanswered points after the early deficit and locked down the Illini offense.

Northwestern is coming off no contest after its scheduled game at Minnesota last week was canceled due to COVID-19 issues within the Golden Gophers program. The week prior, Northwestern lost its first game of the season, 29-20, at Michigan Stat after climbing the rankings all the way up to No. 8 in the AP Top 25 Poll.

As usual, the Big Ten West champion Wildcats have a defense that has shut down offenses left and right all season. Even after a disappointing effort against Michigan State two weeks ago, Northwestern is holding opponents to an average of just over 15 points per game so far this year.

The Wildcats held the Maryland Terrapins and Taulia Tagovailoa, brother of former Alabama star and Miami Dolphins quarterback Tua, to only three points to open the season. Later in the year, they held Wisconsin to only seven points, an offense that put up 45 on Illinois to open the season back in October.

“They have good football players. Their players are strong, they play extremely hard and they’re exceptionally sound,” said offensive coordinator Rod Smith. “They don’t make mistakes, they don’t beat themselves, they’re never out of position and you can tell they’re well-coached. … That’s a great combination for a defense to have.”

After struggling to score after two early touchdowns last week, the Illinois offense will have to find a way to tire out the Northwestern defense. One way to get more points on the board will be consistency from quarterback Brandon Peters.

After an impressive, complete game from Peters both through the air and on the ground against Nebraska, the senior wasn’t able to achieve the same success the following week against Iowa. He started the game strongly but wasn’t able to get anything going after a strong first quarter and a half.

Defensively, the Illini will have to slow down an offense that has found multiple ways to beat their opponents this year.

After their Week 1 blowout win over Maryland, the Northwestern offense has looked inconsistent at times but has done enough to find a way to win games. With the Wildcat defense being the strongest part of the team, it’ll be important for the Illini defense to stop an offense that has found a way to score enough to win games this year.

“What we’re gonna see is a multiple offensive attack,” said head coach Lovie Smith. “They’ve protected the football and haven’t beaten themselves. Playing the way their defense is playing right now kind of allows them to do that.”

Illinois hasn’t beaten Northwestern since 2014, and especially after a disappointing effort and spoiled Senior Day last year, Illinois will be looking to go into Evanston and steal a win from Northwestern heading into championship week. Saturday’s game will be aired on ESPN2, which gives the Illini all the momentum to try and bring the Land of Lincoln Trophy back down to Champaign.

“Land of Lincoln Trophy of course is up, it’s been up north for too long,” Smith said. “Our guys will be pumped up and ready to go, and we’re planning on playing our best game we’ve played all year.”