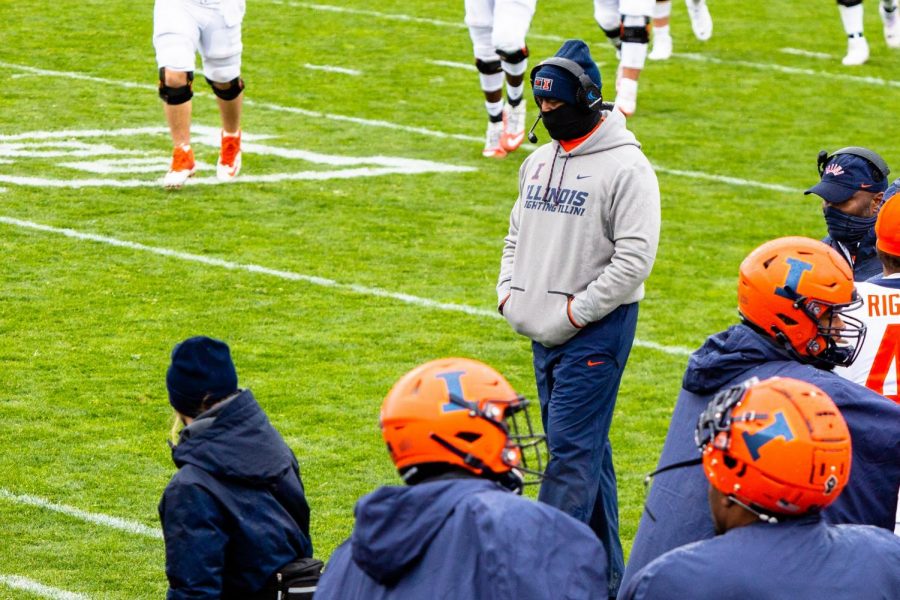 Illinois head coach Lovie Smith walks along the sideline against Northwestern where the Illini lost 28-10. On Sunday afternoon, Illinois Athletics announced its split with Smith.

“Lovie Smith led the Illinois football program with unquestioned integrity during his nearly five years of service,” said Athletic Director Josh Whitman said in a press release Sunday afternoon. “I have tremendous respect for Coach Smith and will always be grateful to him for providing a steady, experienced hand at a time when our program required stability. His unshakeable leadership, never more needed than during this pandemic, will be forever remembered.

“Nonetheless, based on extensive evaluation of the program’s current state and future outlook, I have concluded the program is not progressing at the rate we should expect at this advanced stage in Coach Smith’s tenure,” Whitman continued. “To achieve our competitive objectives, I believe new leadership of the football program is required. I will always look fondly on the time Lovie and I have spent together. I wish him and MaryAnne nothing but the best.”

Through the five seasons Lovie was with the Illini, he had a record of 17-39 winning just 10 out of 33 Big Ten games. After three disappointing seasons, Smith’s 2019 squad looked to be moving the program in the right direction. A nation-shocking win over No. 6 Wisconsin on Oct. 19, 2019, and a comeback victory over Michigan State on Nov. 9, 2019, sent the Illini to its first bowl game since 2014. But, the team ended the season on a three-game losing streak capping it off with a loss to Cal in the Redbox Bowl.

In what was supposed to be Lovie’s best team — the 2020 squad — the Illini have gone 2-5 with wins over Nebraska and Rutgers. While COVID-19 and a plethora of injured starters affected the team’s talent level, every other Big Ten team has dealt with similar issues. Programs like Indiana, Iowa, Maryland and Purdue — all near Illinois’ level in 2019 — progressed in 2020 while the Illini regressed.

With one game left in the 2020 season, Offensive Coordinator Rod Smith will be the interim head coach while Whitman begins to look for the new face of the football program.