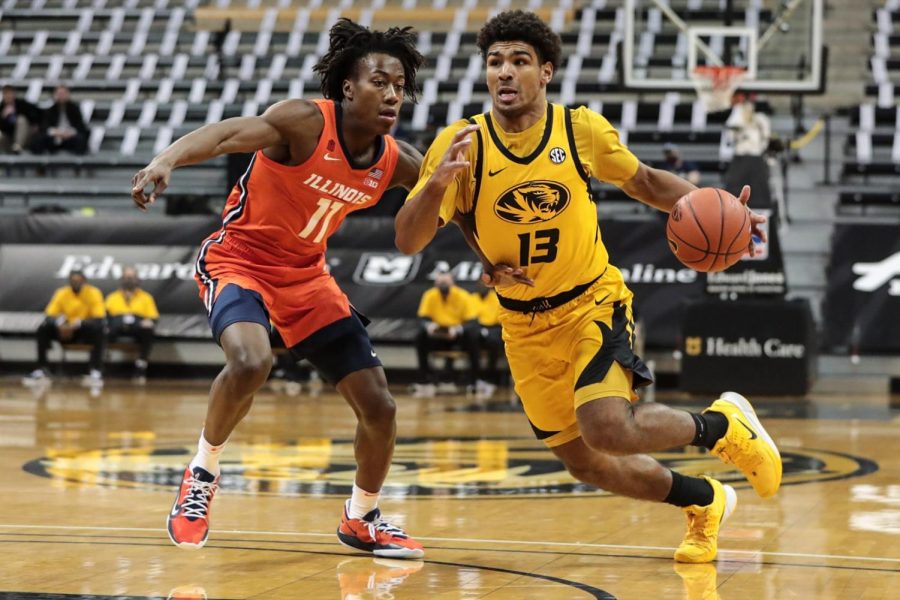 The momentum seemed to be in the Illini’s corner coming into the annual Braggin’ Rights game. Illinois had just knocked off No. 10 Duke at Cameron Indoor on Tuesday, using a balanced offense, with six players finishing with double-digit points, to dominate a top-10 team on the road. Though Missouri entered the matchup undefeated, they had yet to face a team of Illinois’ caliber.

The Illini didn’t look like themselves against the Tigers in the first half. And though the team showed fight after tying the game at 76 with a little under 3.5 minutes to play after trailing by as many as 13 in the second half, it wasn’t enough, as the Illini fell to the Tigers for the third consecutive year, 81-78.

Transition defense, missed free throws and turnovers continue to be major weaknesses for the Illini, and the lack of a balanced offense (three players accounted for 69 of the team’s 78 points) ultimately led to the team’s downfall.

I’ll take you through seven Illini performances (plus an extra one at the end that deserves to be mentioned) from Saturday’s loss.

After an impressive bounce-back game against Duke on Tuesday, it seemed inevitable that Dosunmu would continue his dominance into this rivalry game. I don’t think anyone expected him to put on a show like this.

Dosunmu finished the game with a career-high 36 points, shooting 13-for-20 from the field, the most points by an Illini player since Malcolm Hill put up 40 in 2016. The junior just seems to get better and better, and he seemed like the team’s only answer for most of the second half. Though his desperate three-pointer with under 10 seconds to play wasn’t the look the team was looking for (or at least I hope so), Dosunmu was the best player on the court for the Illini by a country mile.

The six turnovers are a bit of a concern headed into Big Ten play, but after accounting for nearly half of the team’s points in a rivalry game, I don’t think you can give Dosunmu anything other than an A+.

After taking the college basketball world by storm last year, my expectations for Cockburn are through the roof. This was arguably his best game of the season so far, putting up 19 points and grabbing six rebounds.

Free throws continue to be a weak spot for Cockburn, and the team as a whole, and the sophomore shot just 3-for-6 on the night. I know big men aren’t known for their free throw shooting, but free points are free points, and in a three-point loss to a rival those can come back to bite you. And, Cockburn continued to let the ball slip through his hands, something he also struggled with against Duke on Tuesday. His defense was much more disciplined, frequently closing down players on the perimeter.

The referees certainly didn’t help him out (more on that later), but Cockburn has to figure out how to stay out of foul trouble once Big Ten play gets going. Going into the last few minutes on three or four fouls just isn’t going to cut it once Illinois takes on conference rivals.

To be completely honest, I forgot Miller was playing for most of the game. After a lights-out shooting performance on Tuesday, the Chicago native shot just 1-for-6 and scored two points on the night. Oh yeah, and those two points came less than two minutes into the game.

We’ve seen how dangerous Miller can be from behind the arc this season, though he went 0-for-3 against the Tigers. His defense was probably his bright spot, making two nice steals, including one that led to a nice coast-to-coast layup. After impressive offensive showings earlier in the season, it’s nice to see Miller improving a bit defensively, but the Illini need him to produce on offense to win games.

It’s hard to say anything bad about Williams these days, as he puts in consistent performances on defense, game in, game out. Saturday just wasn’t his best showing for his standards. I guess it’s also worth noting that he was the only Illini starter who finished the game with less than four fouls?

Not known for his shooting ability, Williams has drastically improved lately, knocking down three-pointers at will. Williams shot 1-for-3 from deep against the Tigers, though he didn’t get many open looks which he needs to succeed. Regardless of his offensive or defensive performance, the Peoria native continues to show why he’s a fan favorite through his passion and work ethic, and that was evident again tonight, especially after missing a three-point attempt and subsequently getting a steal in crunch time.

It just wasn’t his night. Sloppy, unnecessary fouls continue to be an issue for Frazier, though his lack of offensive production also played a role in the loss. I know I sound like a broken record, but Frazier only scored four points and went just 1-for-3.

A reduction in turnovers, however, is a good sign moving forward. After back-to-back games with five turnovers, Frazier didn’t turn the ball over once against the Tigers, and the Illini are going to need him to be smart with the ball moving into Big Ten play next week.

Man, this kid is going to be good. Curbelo is an elite passer and has one of the highest basketball IQs in all of college basketball, and he showed once again why he was so highly praised coming into the season, feeding Cockburn in the lane down the stretch.

Though his distribution to teammates was phenomenal, his scoring was also impressive, finishing with 14 points on the night. He still struggles with turnovers and makes a few bad decisions with the ball at times, but I’ll give him a little leeway since it’s only his sixth game in an Illinois uniform. Saturday’s game was certainly a step in the right direction, and Curbelo has the potential to continue receiving significant playing time in Big Ten play.

After a disappointing sophomore campaign, I don’t think anyone could’ve expected the junior forward to start the season so strongly. Coming off back-to-back impressive displays against two top-10 teams in the country, I expected another solid outing against the Tigers. I was far from impressed with his performance tonight.

Bezhanishvili averaged 13 points the last two games, and he arguably outplayed fellow Illini and Big Ten Freshman of the Year Cockburn in both of those games. On Saturday, he missed the only shot he took, and he accumulated four fouls, including three on offense, despite playing only 13 minutes.

Let’s hope Bezhanishvili can put this game behind him and get his early-season groove back before Illinois faces Minnesota on Wednesday.

There’s no excuse for a performance like that. In a rivalry game, you expect things to be physical, but blowing your whistle after any slight contact by either team is excessive. When you have the entire college basketball world against you, you know you did something wrong.

52 fouls is utterly ridiculous, and having nine players with four fouls with the game on the line, including two Missouri players who fouled out, just can’t happen in an intense rivalry game. You can form your own opinion about the call against Cockburn with under a minute to play, but that was one of the many questionable calls all night from the men in black and white.  The only thing keeping them from getting anything lower is the fact that they were calling things for both teams.