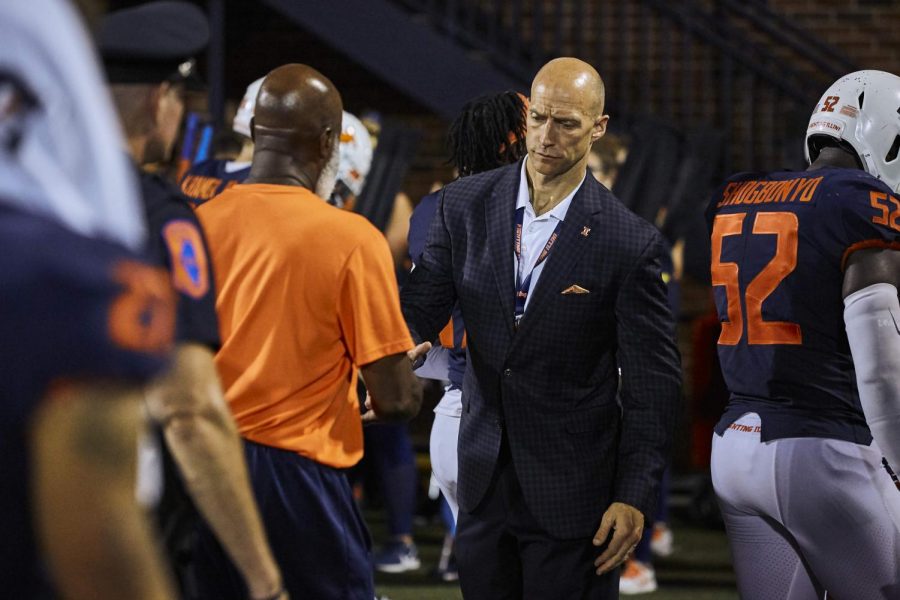 Athletic Director Josh Whitman shakes Lovie Smith’s hand after a football game on Sep. 21, 2019. After five years at Illinois, Smith was fired on Sunday as a result of not winning enough games for the program.

It’s Oct. 22, a day before the long-awaited Illinois football season begins at Wisconsin. There are hopes of upsetting one of the Big Ten’s top programs for the second year in a row. It would make even more sense the Illini could pull off a win over the Badgers this season — the 2020 squad is the most talented Lovie Smith has produced in his five years at Illinois.

After a poor performance led by a nonexistent offense at Madison, however, there was no need to panic. Wisconsin is among the country’s top teams, right? And, there were perfect opportunities to bounce back against Purdue and Minnesota at home.

But, then COVID-19 hit the team and the Illini would be down a dozen core players, including quarterbacks Brandon Peters and Isaiah Williams.

“The pandemic is something that has to be mentioned,” Athletic Director Josh Whitman said. “It has been a major component of all of our lives now. That was something I had to wrestle with emotionally, how do you evaluate a football program in the middle of a pandemic?”

Even without some starters, a fifth-year head coach with Big Ten talent should be able to find a new way to win. That wasn’t the case as Illinois was outscored 72-38 against the average, at best, Boilermakers and Golden Gophers.

“I had to look under the hood and understand what was contributing to those performances,” Whitman said. “It wasn’t about necessarily the score on the board as much as it was how we were playing and why I felt we were playing that way.”

While wins against Rutgers and Nebraska followed, the Illini were still failing to play a complete game and that was exposed against Iowa. After a 14-0 start, the Hawkeyes scored 35 unanswered and convincingly beat the Illini on Senior Day — a common recurrence lately.

2020 was always going to be the year Whitman would make evaluations on the program. Five years ago when he hired Smith, Whitman assumed that decision would be an extension. Even after last year’s six-win, bowl qualifying season, there was legitimate hope Smith was finally on the right track. Now, it seems like the 2019 season was more of a fluke.

It wasn’t the Iowa game, though, that was the sole reason for Smith’s firing. To Whitman, it was about the “accumulation of observations and data points that I’ve gathered over these last number of years.”

But in the week following the Iowa loss, the decision became clear. There would be no extension, no reworking of a contract, no compromising. 17 wins, 10 in the Big Ten, wasn’t nearly cutting it. The past success and great character weren’t enough — not when there was real potential for this program. And that would be the end of the Lovie Smith era.

“We had a lot of objectives as you can imagine in these first years of my tenure, of Lovie’s tenure,” Whitman said. “And we accomplished a lot of those. Did we win enough games? Absolutely not. And certainly, Lovie would be the first to admit that.”

Whitman met with Smith in-person Sunday morning and broke the news, let Smith address the team, then spoke with them himself. While he obviously addressed the Illini as their leader, he made it known he is also available as an alumnus of the university and more importantly, a former Illinois football player.

But now Whitman’s primary duty to that “incredible group of guys” is to go out and find the person who can get them over the hump Illinois has been stuck on for years. For Whitman, though, it’s also about pushing past the hump, reaching the top of the mountain and staying there for years to come — something the Illinois football program historically struggles with.

“We need to find someone who can be a program builder, someone who can build long term, sustained success,” Whitman said. “I think that’s one of the things that’s interesting about the University of Illinois. Every so often we jump to the top and we’re just not able to capitalize on that success. Whether it’s to the Sugar Bowl or the Rose Bowl.

“I think we have to find a way not to just get to the top, but build our way there incrementally, systematically, so that when we arrive we have a strong foundation under us that allows us to capitalize on that success and even accelerate past it.”

Whitman is looking to find that program builder soon, as he believes these “seats shouldn’t be vacant for long.” Excited about his shortlist of candidates, Whitman said the coaching search will move “quickly, confidentially.”

But, what does that hire look like? Well, to start, that hire needs to be a top in-state recruiter. Smith’s biggest struggle was recruiting homegrown skill position players — often losing out to Wisconsin, Iowa or Northwestern. That hire will also have the highest of integrity as Whitman doesn’t believe his program needs to settle for a coach with past baggage or red flags.

“I believe this is one of the premier vacancies in college football this year,” Whitman said. “I think we’ve got an unbelievable opportunity here at the University of Illinois. Our potential for this football program, for a long list of reasons, is just below the surface and I think we have to find the right leader to tap into that.”

And to Whitman, specific schemes or plans for new hires aren’t at the forefront of his concern. While that can be assessed down the road, right now Whitman is looking for one thing to fulfill the hole in his athletic department and potentially be the path to a long career at his alma mater: a winner.

“I want to win. I want somebody who is going to come in here and win football games, do it with integrity and for a long time,” Whitman said.