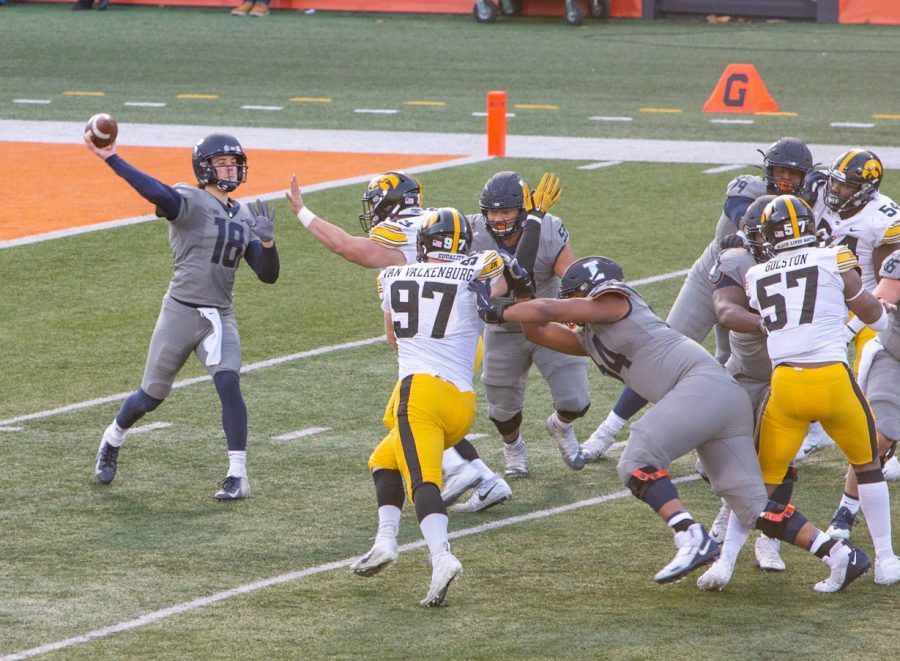 Offensive lineman Kendrick Green (53) blocks defenders during the game against Iowa on Dec. 5. Green has been named to the All-Big Ten first-team.

Illinois offensive lineman Kendrick Green was named to the All-Big Ten first-team on Tuesday by the media. A former four-star recruit, Green has started 32 straight games for the Illini, including all seven at left guard this season. The Peoria native is the first Illinois offensive player to earn first-team honors since wide receiver A.J. Jenkins won the award in 2011.

Brown, also named to the media’s All-Big Ten Third Team, has been impressive on the ground in his first full season in Champaign, averaging over 70 yards per game this year while he also scored his first two touchdowns of his collegiate career. The redshirt sophomore also set a career record in rushing yards with 131 at Rutgers on Nov. 14.

Epstein has also had a solid campaign, averaging nearly six yards per carry this season. Though he was sidelined for one game with an injury, Epstein has scored a team-high four touchdowns this season.

Kramer is the team’s starting center, though he missed two games this season, while Lowe is the starting left tackle and has played in all seven games so far this season.

The All-Big Ten defensive team will be released on Wednesday and special teams will be announced on Thursday.