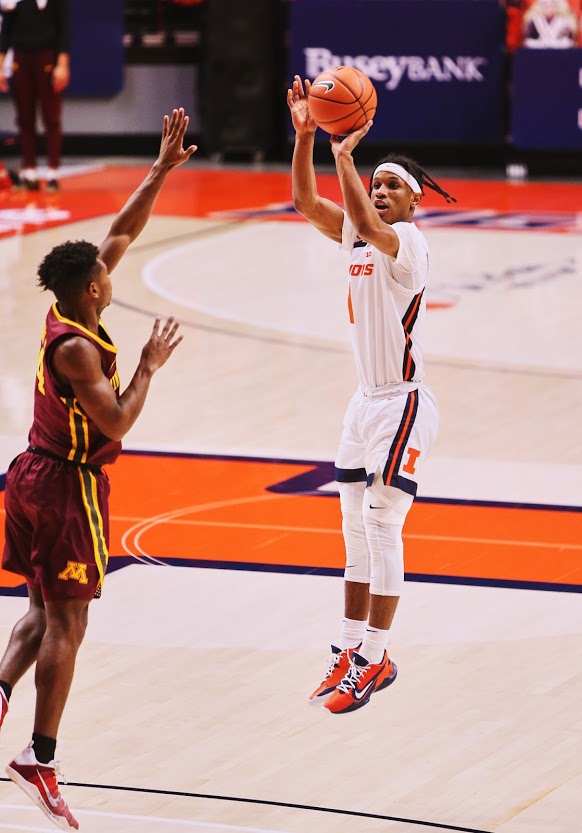 Junior Trent Frazier takes a shot during the game against Minnesota on Tuesday. The Illini won the game 92-65.

After a rocky six minutes in the Big Ten opener against Minnesota, the Illini got a burst of energy that lasted the next 34 minutes. Intense all-around defense combined with a career night from sophomore center Kofi Cockburn led Illinois to a 92-65 victory, Illinois’ first conference opener win since 2014.

Inside presence was the key to success against the Golden Gophers. Illinois allowed just 14 points in the paint, while scoring 48 of their own while convincingly winning the rebounding battle 53-35.

After his own career night at Missouri, Dosunmu was a quieter Tuesday night, scoring just 10 points, struggling to get shots to fall and going 5-for-14 from the field. Uncharacteristically, Dosunmu also missed both free throw attempts.

But, Dosunmu continued to do the little things right, which has added to his value this season. The junior grabbed seven rebounds and dished out five assists. His defense was also superb as he held Both Gach to just one point when he usually averages 15.3 points per game.

It is safe to say, though, Dosunmu is still incredible in transition both with shooting and passing. His court vision and basketball IQ is through the roof. And, sometimes we need a reminder that he is actually human and can’t put up monster numbers every day.

I’m not sure Miller is capable of missing a corner three. Once he sets up in that spot, he is lights out and that was no different Tuesday night as he put up 14 points on 4-9 shooting from behind the arc. While Miller did struggle to make mid-range shots or floaters, his three-point shooting will be key in Big Ten play.

Miller did take good care of the ball, however, with him and Frazier being the only starters to not commit a turnover. The freshman also played solid defense on Gabe Kalscheur, limiting him to nine points on 3-8 shooting from the field.

Frazier has continued to show why is one of the league’s top defenders. Brad Underwood raved about his senior’s energy and leadership on defense against Minnesota as Frazier guarded the team’s top scorer in Marcus Carr.

Carr, who averages 23.5 points per game was limited to 16 against the Illini, courtesy of Frazier. And while 16 is still a lot, Frazier held Carr to 3-of-13 shooting from the field as nine of his points came from free throws.

And to top it off, Frazier got hot from his money spot behind the arc. Frazier finished with 10 points and made both of his free throw attempts — something the Illini have struggled to be consistent with.

I would say Williams played a pretty average game but was extra effective on the defensive end. The senior grabbed eight rebounds, the second-best on the team behind Cockburn.

Williams also was pretty mismatched, as he guarded 6-foot-9 Isaiah Ihnen, but held him to three points. Williams’ own offense production was slowed Tuesday night, scoring just two points on two shot attempts. What I loved most from Williams’ performance against Minnesota was the energy he brought when he was on and off the court, constantly cheering and hyping his teammates up.

I’ve waited a long time —4 weeks — to see a monster performance from the Illini big man. And he finally delivered with a career-high 33 points and 13 rebounds, his 16th career double-double. Cockburn dominated Minnesota’s 7-foot center Liam Robbins early, drawing two quick fouls to put Robbins on the bench and draw a mismatch in the paint.

Cockburn was making better moves in the low post than previous games and got more physical in the rebounding game. But most importantly, Cockburn had stronger hands against Minnesota. One thing Cockburn had struggled with prior to Tuesday night was handling Andre Curbelo’s nifty passes, but the sophomore looked a lot more comfortable with the assists from Curbelo.

One of the major takeaways from the Big Ten opener was the Illini have other players besides Dosunmu that can dominate in a given night depending on the opponent. Dosunmu can’t always put up 30 points, so finally seeing Cockburn take over that role was huge.

Bezhanishvili didn’t’ really make that much of an impact when he was in the game, but he also didn’t mess much up either. In previous games when Cockburn wasn’t playing well, Bezhanishvili stepped up and produced in the paint. But with Cockburn’s sustained success Tuesday, he wasn’t needed as much.

The junior finished with four points, making two of his three shot attempts and also had five rebounds. Bezhanishvili has shown, this season, that he’s capable of playing multiple different roles on the floor, something he struggled to adjust with last year.

It’s hard to argue this freshman isn’t one the most exciting players to watch in college basketball right now. Every game Curbelo pulls out a new, impressive move to dish the ball out in the paint and around the perimeter. I’m not sure there’s a pass he can’t make.

However, he can overdo it at times, leading to multiple turnovers in a game, something Underwood yelled at him about on the sideline Tuesday night. But, Curbelo has slowly proven himself as a shooting threat, scoring from the paint, behind the arc and on the free throw line against Minnesota, resulting in nine points.

Assuming Curbelo spends a 2-3 more years at Illinois, he’s likely to become one of the program’s elite players and will be a fan favorite for awhile.

As time goes on, Hawkins is starting to look more comfortable on the court. While he still doesn’t have a large role, and probably won’t for the remainder of this season, Hawkins provide a solid and long defensive presence, often matching up well with the opponent’s four spot.

Hawkins did have two points against the Golden Gophers, which came from a perfect free throw series. In the first half, Hawkins got the ball with the shot clock winding down, made a nice ball fake and drew the foul on a drive to the hoop. Once he gets more experience in the league, those opportunities will come more often.