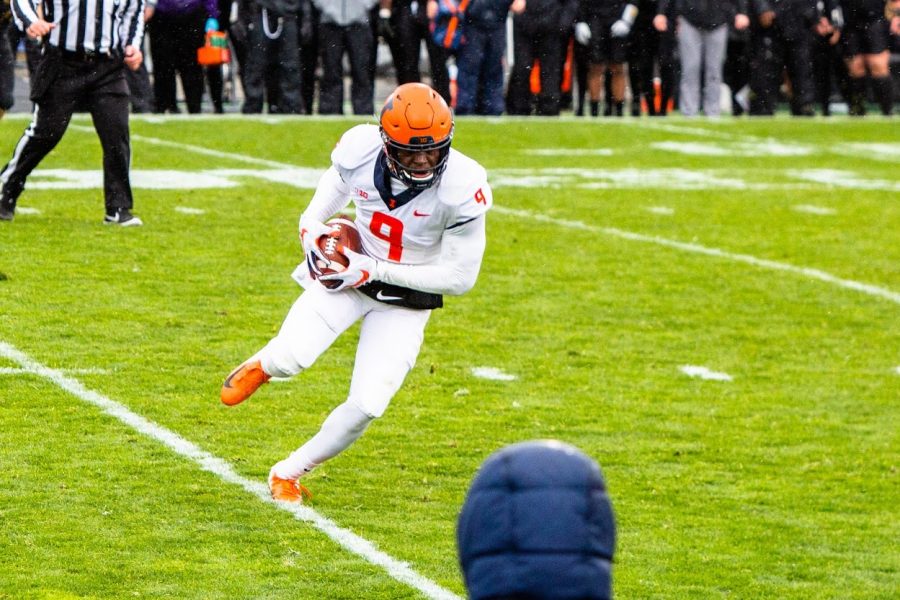 Redshirt senior Josh Imatorbhebhe catches a pass during the game against Northwestern on Saturday. Imathorbhebhe has declared for the NFL Draft.

After two seasons in Champaign, redshirt senior wide receiver Josh Imatorbhebhe announced Thursday via Twitter that he is declaring for the NFL Draft.

“I’d like to thank all of my coaches, family, friends and, most importantly, fans and fellow students for making my experience what it was at the University of Illinois,” Imatorbhebhe said on Twitter. “My time here exceeded my wildest expectations, and I leave here knowing that I am forever a member of the Illini Nation. Thank you for taking me in a year ago and giving me a chance to reclaim my dream. We made so many great memories for that, and to you I am eternally grateful.

“Without further ado, I want to announce that I am officially declaring for the NFL Draft. I wish the team and my brothers nothing but the best. I will always be a proud alumnus of this great university.”

Imatorbhebhe transferred to Illinois from Southern California in 2019 and made an instant impact, quickly becoming quarterback Brandon Peters’ favorite target. In his first season as an Illini, the Suwanee, Georgia, native had 33 receptions for 634 yards and nine touchdowns, just one score short of the program record for touchdown receptions in a single season.

Perhaps his most notable impact came against Michigan State on Nov. 9, 2019, hauling in a 46-yard touchdown to close out the first half and give the Illini momentum down 18 before scoring on an 83-yard touchdown pass at the start of the fourth quarter to cut the deficit to 14.

Despite these unreal efforts, it will be Imatorbhebhe’s improbable catch on 4th-and-17 with the Illini down by four with under two minutes remaining that will forever be remembered by fans across the country, helping the program come back from a 25-point deficit and clinch a bowl berth for the first time since 2014.

Though he may not have had the most dominant 2020 season, Imatorbhebhe still led the team in receptions (22), receiving yards (297) and touchdowns (3).

Imatorbhebhe will not play in Illinois’ season finale on Saturday.