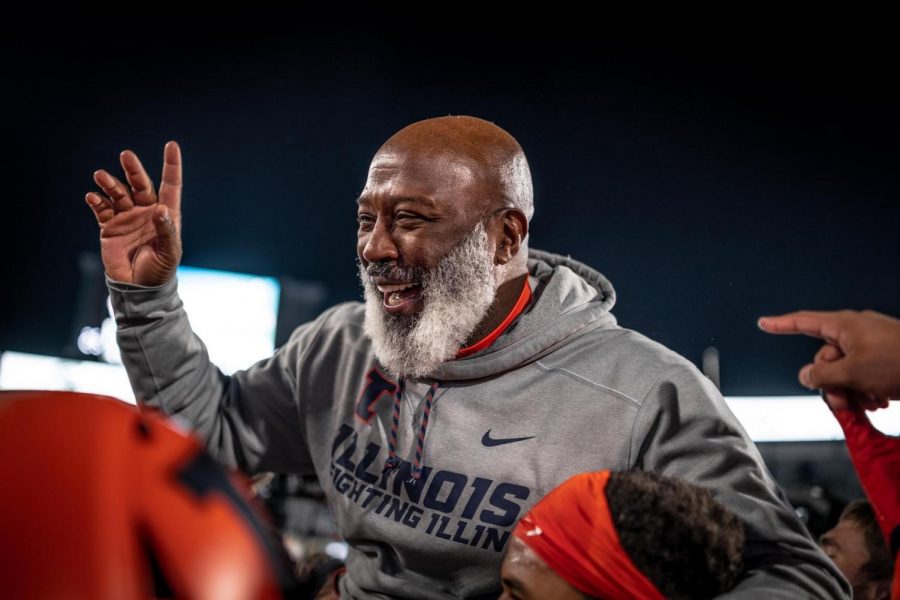 After five years of underperformance and disappointment, the Lovie Smith era is officially over in Champaign. With an overall record of 17-39, including 10-33 against Big Ten opponents, the move to relieve Smith of his duties as head coach of the Illini shouldn’t shock many fans, especially given significant struggles with in-state recruiting. Though there are certainly more than a few disappointing performances under Lovie’s watch, let’s take a look at four impressive wins for the Illini over the past five seasons.

After going winless in Big Ten play in 2017, the Illini needed a consistent quarterback who could grind out some results against conference opposition. In came AJ Bush Jr., a transfer from Virginia Tech who had already played at three different schools before settling in Champaign for a season. Though he wouldn’t guide the Illini to a bowl game, he helped the team win two Big Ten games and establish one of the best offensive performances of the Lovie Smith era against the Golden Gophers of Minnesota.

Illinois entered the matchup with Minnesota on a three-game losing skid, though the team picked up its first conference win since 2016 against Rutgers three weeks prior. With the Golden Gophers coming off their first Big Ten win of the campaign, I don’t think anyone expected the Illini to put together such a dominant performance on Dad’s Weekend.

55 points was also the most points the Illini scored in a regulation Big Ten game since taking down Indiana by the same scoreline in 2008. Though this wound up being the final win for the Illini in 2018, this offensive masterclass is easily one of the highlights of the Lovie Smith era, though the 2019 season was his best in Champaign.

Coming into a home matchup with the sixth-ranked, undefeated Wisconsin Badgers, nothing was going the Illini’s way. Four straight defeats, including against Eastern Michigan, set the stage for one of the most anticipated games of the season. Though no one gave the Illini a chance against an all-around dominant and complete Badger squad, the underdog mentality helped the team pull off one of the greatest wins in program history.

After an 11-play, nearly 6-minute drive by the visiting Badgers to open up the game and an early injury to wide receiver Ricky Smalling, it seemed like it would be a long day for a struggling Illini squad. Two punts and a missed field goal from the Illinois offense illustrated the story for the team all year: they just could never get anything going.

After a strip sack from junior Jake Hansen, however, the Illini drove down the field, and junior Brandon Peters connected with sophomore Donny Navarro for 48 yards for a touchdown to bring the team just a field goal away from tying up the game.

A fumble by junior Josh Imatorbhebhe on Illinois’ own 24-yard line set up a Jonathan Taylor touchdown in front of the student section to extend Wisconsin’s lead to 20-7, sucking all of the energy out of Memorial Stadium.

But something special was brewing in Champaign. A missed Badger field goal on the next drive reinvigorated the crowd, and the Illini drove 80 yards down the field and scored on a 43-yard touchdown run from senior Reggie Corbin. After the Illini got stuffed on fourth-and-1 on their next drive, another Hansen forced fumble gave the ball right back to Peters and the offense. Imatorbhebhe, knowing he had to make up for his lost fumble, made a big 29-yard touchdown catch and cut the Badger lead to just two points with just under six minutes to play.

I’m sure an upset lingered in the back of every Illini fan’s mind (including my own, I must admit), but I don’t think anyone could’ve predicted what happened next. After making big plays all day, Wisconsin quarterback Jack Coan seemed destined to make one more on third-and-5 and essentially seal the game. On a pass intended for a seemingly-wide open tight end Jake Ferguson, who was Coan’s favorite target all day, Illini junior Tony Adams made the biggest play of his career and jumped up and came down with an interception, setting up one of the most nerve-wracking moments in Illini history.

On fourth-and-6 from the 21-yard line in front of the north stands, nothing but a sea of orange, out came junior kicker James McCourt for the biggest field goal attempt of his career. Having already missed a 40-yard attempt earlier in the game, the kick was anything but a certainty.

The successful field goal and ensuing on-field celebrations are the highlights of the Lovie Smith era, with the win energizing an underwhelming Illini squad en route to a four-game win streak and an eventual bowl berth.

After three straight wins over No. 6 Wisconsin, Purdue and Rutgers, Illinois came to East Lansing looking to clinch a bowl berth for the first time under Lovie Smith and for the first time since 2014. Meanwhile Michigan State entered the game on a three-game skid, meaning the visiting Illinois squad had all the momentum. What unfolded over the next four hours will never be soon forgotten by Illini fans.

The first half was ugly: the Illini punted six times, allowed 28 points and turned the ball over once. The final minute of the second quarter, however, turned the tides in the Illini’s favor, as an interception from sophomore Sydney Brown with under a minute left led to a four-play, 81-yard drive, with a 46-yard touchdown to Imatorbhebhe with no time remaining capping off the drive.

Despite the impressive drive to close out the half, the Illini trailed by 18 points, 28-10, and had to put the defense back onto the field to open the second half. After allowing a field goal and alternating punts for most of the third quarter, the Illini entered the final frame down by three scores, 31-10. But a 83-yard touchdown pass to Imatorbhebhe, his second of the game, on the first play from scrimmage of the fourth quarter cut the deficit to 14.

After the defense forced another three-and-out, the Illini offense drove down the field and scored on a six-yard Corbin run, halving the deficit with just over 11 minutes to play. With all the momentum in their favor, the defense came up huge once again, forcing a fumble at the Spartan 8-yard line to put the offense in a first-and-goal situation and potentially tie the game with a touchdown and extra point. But it was the Spartan defense that would come through this time, intercepting Peters on third-and-goal and forcing the Illini to make a big stop once again.

After driving down to Illinois’ 45-yard line, it seemed like the Michigan State offense would continue running down the clock and end all hopes of a miracle comeback. Sydney Brown had other plans, however, returning an interception 76 yards to the house, putting the Illini just an extra point away from tying up the game, a game the team once trailed by 25 points. But McCourt missed, and it seemed like all the team’s hard work and fight was for nothing. A Spartan field goal with just over three minutes remaining extended the hosts’ lead to four, but given the uncertainty and back-and-forth nature of the game thus far, anything was possible.

Despite throwing an interception on his last pass, two quick first-down completions from Peters got the offense rolling, but the Spartans weren’t done fighting yet. A sack and two incompletions set up an improbable fourth-and-17 for the Illini, and once again it seemed like all the team’s hard work was for nothing. Rolling right, Peters heaved the ball up to Imatorbhebhe, who somehow made the catch over two defenders, giving the Illini the ball in the red zone with under two minutes to play.

After senior running back Dre Brown got the Illini inside the 1-yard line, three straight stops by the Spartan defense set up fourth-and-goal at the 4. A float pass to senior Caleb Reams had all Illini fans holding their breath, and when the pass was incomplete, it appeared the game was over, but pass interference was called on the play, and the Illini were given a lifeline. On second-and-goal from the 5, Peters rolled right and patiently waited for a target to get open. That target was sophomore tight end Daniel Barker, who was somehow wide open in the back of the end zone.

The 25-point comeback was the biggest comeback in program history, with the previous highs only 20 points in 1999 and 2005. With the win, the Illini advanced to 6-4 on the season and earned their first bowl game berth since 2014. Though the team went on to lose its remaining three games, 2019 was the most successful season of the Lovie Smith era.

Entering Lincoln as 16.5-point underdogs should not have surprised anyone, as the Illini were not off to the best of starts in 2020. The team was all over the place and lost by 38 points at Wisconsin to open up the season before losing Peters, the Illini’s starting quarterback, for three games after he tested positive for COVID-19. With several players out due to contact tracing, including redshirt freshman backup quarterback Isaiah Williams, Illinois was forced to start third-string QB Matt Robinson at home against Purdue, though the sophomore was injured on the first drive of the game. In came fourth-string Coran Taylor, and despite playing fairly well, Illinois fell 31-24 before getting steamrolled by Minnesota the following week, 41-14, in Taylor’s first career collegiate start.

After Williams was cleared to return against Rutgers, the team picked up its first win of the season, though it wasn’t easy; despite Williams rushing for 192 yards, the most in a single game by a quarterback in program history, a game-winning 47-yard field goal from McCourt with three second remaining sealed the deal for the Illini.

Finally, after the mandatory three-week period of rest for players who test positive for COVID, Peters returned against Nebraska, and everyone was back. Despite not playing for three weeks, Peters looked sharp right away. After the defense forced a turnover on the first play of the game, the Illini needed just three plays to find the end zone, with sophomore Chase Brown punching the ball in on a 3-yard run.

The Illini would continue to roll on their next two possessions, finding the end zone on each of them, including Brown’s second touchdown of the day and a 28-yard pass to Imatorbhebhe. Though forced to punt twice, the Illini tacked on another touchdown before halftime, with junior Mike Epstein finding a hole and running for 58 yards before ultimately punching the ball in from a yard out for his first score of the day.

Though the Illini would add 13 more points on offense, the story of the second half was the defense, who forced a fumble and an interception to halt the Cornhuskers from making a comeback. While Peters looked solid in his first game back, he wasn’t the main story, as the defense forced five total turnovers in the game while the offense ran for a total of 285 yards, with Epstein and Brown rushing for over 100 yards each, in the 41-23 win, the Illini’s first win in Lincoln since 1924.

This was arguably one of the most all-around, complete and dominant games from the Illini under Lovie Smith, though it also happened to be his final win as the team’s head coach.

Illinois looks to close out a disappointing 2020 campaign on a high note at Penn State on Saturday, with Rod Smith acting as interim head coach in the season finale.