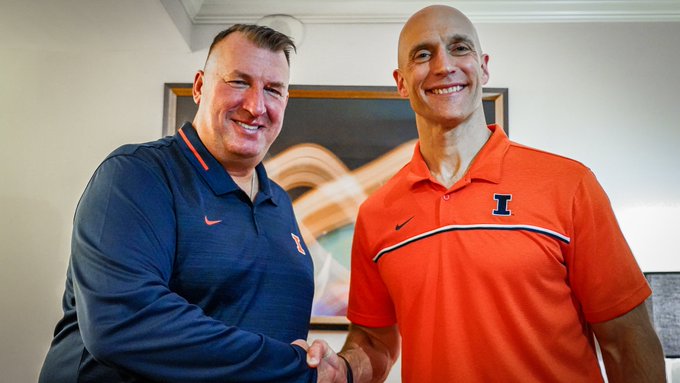 It took just a week for Illinois Athletic Director Josh Whitman to find the next face of the Illinois football program. And on Saturday morning, Bret Bielema was announced as the program’s new head coach.

“Bret Bielema is a proven winner. With three Big Ten championships to his credit, few coaches can match his familiarity with, and success within, the Big Ten Conference,” said Whitman in a press release. “In our conversations, it became clear to me that he is a life-long learner who is continually looking to grow and improve, and he has enjoyed unrivaled mentorship from some of the game’s most distinguished coaches, including Hayden Fry, Kirk Ferentz, Bill Snyder, Barry Alvarez, and Bill Belichick — all of them current or future Hall of Famers.

Bielema has a long coaching history at the collegiate level with an overall record of 97-58 as head coach at Wisconsin and Arkansas. Bielema led the Badgers to three Big Ten Championships from 2010-2012 and six consecutive bowl games. He also played at the Big Ten level — walking on as a defensive lineman at Iowa in 1989, before earning a full scholarship.

However, Bielema’s most recent coaching stint was out of college football and in the NFL with the New York Giants as a linebackers coach. Bielema previously worked under Bill Belichick in 2018 and 2019 as a defensive line coach.

One of the most important things about Bielema — he’s from Illinois. The Illini struggled to recruit in-state prospects under Lovie Smith, but Whitman made it apparent that would be a critical factor in the coaching search.

“Illinois and the Big Ten is home for me, and I can’t be any more excited about the opportunity in front of me with the Fighting Illini,” Bielema said. “We want to build a program that makes Illini Nation proud and regain the passion that I’ve seen when Illinois wins. We want the young men playing football in the state of Illinois from Freeport to Cairo and from Quincy to Danville dreaming of wearing the Orange and Blue and playing at Memorial Stadium. I look forward to re-connecting with the high school coaches around the state making it clear we intend to keep our players home.

“We will build an outstanding staff for both player development and recruiting. The University of Illinois has incredible facilities and is known as one of the world’s outstanding academic institutions. We will hold the young men on our team responsible both on and off the field while coaching them to be champions in life.”

Offensive coordinator Rod Smith will still serve as the interim head coach at Penn State Saturday afternoon, but Bielema will be in attendance.