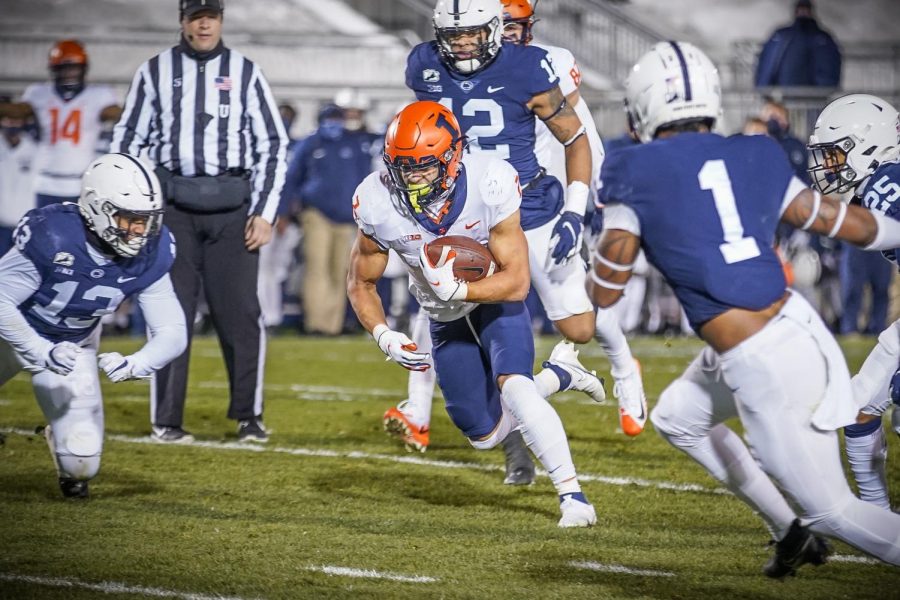 Chase Brown runs the ball in Illinois’ game against Penn State on Saturday. The Illini fell 56-21.

“Illinois, Illinois, Illinois… Illinois,” Penn State head coach James Franklin preached via Twitter to focus his Nittany Lions for their matchup Saturday against the Illini. And the message was clearly received, as PSU defeated the Illini 56-21 in dominant fashion.

In the first game in five seasons without Lovie Smith as head coach, Illinois could not get it done in State College Saturday with six defensive and three offensive starters missing.

“We battled through a lot of adversity … that we weren’t necessarily prepared for,” said linebacker Jake Hansen. “Obviously we could have played a lot better, we could have done a lot of things better but I would say we fought til the end.”

Despite an exciting start, with 14 points scored by each team in the first five and a half minutes of play and Illinois eventually taking a 21-14 lead, Penn State dominated the rest of the way and scored 42 unanswered points.

The defense was a problem for Illinois all year, never giving up less than 20 points in a contest. With six starters missing due to COVID-19 and injuries, Penn State’s offense scored easily on the Illini.

The Illini also gave up north of 200 yards rushing for the fourth straight game.

Redshirt freshman Isaiah Williams started his second game of the year for the Illini, and despite providing a spark early, couldn’t lead Illinois to another win. Williams recorded 120 yards in the air with two touchdowns and 102 yards on the ground but struggled to complete passes against a good Penn State secondary.

Williams will be back for his sophomore season next year and will look to make strides as a second-year starter.

“That’s one thing about me, I’m gonna come back next year a different player,” Williams said. “Being more accurate, making better reads, being more decisive, being a better leader. Everything that comes with the game, I gotta be better at.”

Penn State twice scored on the first play of the drive, both long touchdowns to Dotson, and returned a kickoff for a touchdown in the first quarter. The two touchdowns by Dotson exposed an Illini secondary with multiple players out, a problem Illinois dealt with all season long.

Despite a high-scoring first half, which ended with a 42-21 score, the second half was quieter. The Illini were unable to score and the game ended with a 56-21 Penn State victory.

Brian Hightower and Daniel Barker both caught touchdown passes for the Illini, and Chase Brown capped off an impressive first full season with the team with a rushing touchdown.

The loss at Penn State concludes the 2020 season for Illinois. Despite high expectations from the team coming into the year, the Illini finished with a 2-6 record and a last place finish in the Big Ten West. With the coronavirus heavily affecting the team and changes coming every week, Rod is proud of the way his players worked this season.

“I’m proud of our kids, I’m proud of our guys. They never quit,” Rod said. “We’re down, we’re down some numbers and down some talent from injuries and different things, but our guys didn’t quit and that’s all we ask our guys to do.”

Illinois will begin 2021 with a new head coach in Bret Bielema and are scheduled to start the season in Ireland on Aug. 28 against Nebraska.