No. 13 Illinois prepared for defensive, low-scoring game with No. 19 Rutgers 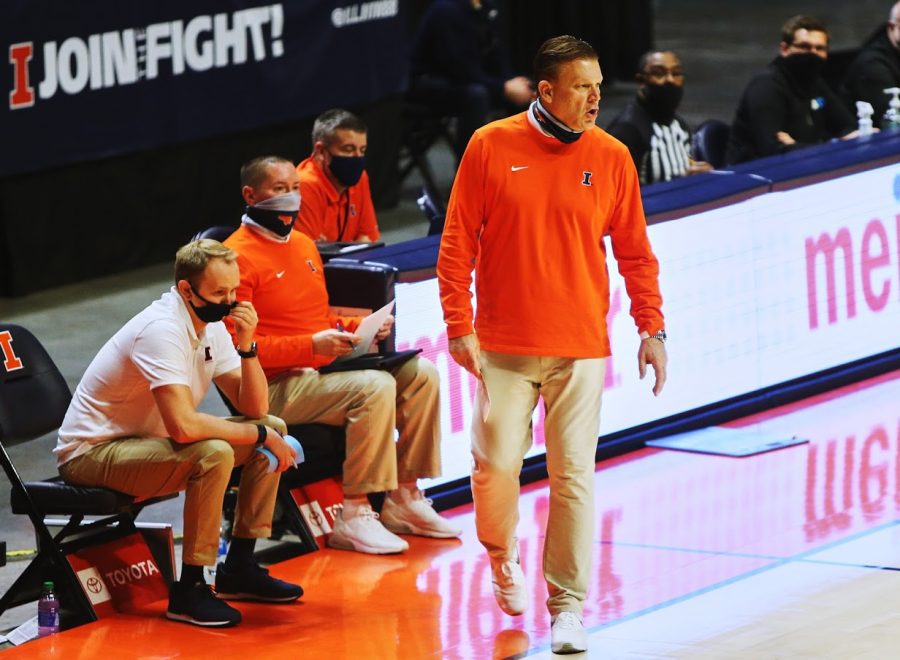 Illinois head coach Brad Underwood instructs his team from the sideline during the game against Minnesota on Tuesday.

For the third time this season, No. 13 Illinois will travel on the road for a ranked matchup. Coming off a slaughtering at home against Minnesota to open Big Ten play, the team will be in New Jersey for a battle with No. 19 Rutgers.

In typical Rutgers fashion, the Scarlet Knights are playing a tough brand of basketball. They are 14th in adjusted defensive efficiency, allowing just 64.6 points per game. Last season, the two teams split the two matchups. Illinois averaged just 55.5 points in those two games.

With a large chunk of players back from both sides, Illinois head coach Brad Underwood expects another gritty matchup on Sunday.

One difference between this year’s Scarlet Knights team and last year’s is pace of play. Steve Pikell’s squad is up to 74 possessions per game after averaging 69 per game last season. Underwood attributes that to Rutgers senior guard Jacob Young.

“He is a one-man fast break,” Underwood said. “He’s jet-propelled. He plays very fast. He’s got a great knack for finding a crease.”

Another reason Rutgers has improved is the play of Ron Harper Jr. The 6-foot-6 son of former Chicago Bulls guard Ron Harper, Harper Jr. is off to a hot start to year three. He’s up to 23.2 points per game on 60% shooting from the field and 50% from three. Harper looks the part of an All-Big Ten player.

“He’s basically become the guy. It’s not easy to become that,” Underwood said. “Last year they were very balanced in their scoring, but now he’s stepped into a star’s role and he’s doing it very well. He’s shooting the cover off the ball.”

Sunday’s contest is at the tail end of five out of six games away from the State Farm Center for Illinois. Tip-off is scheduled for noon central time and can be watched on ESPN2.