Notes, player grades: Illini struggle on both ends of the ball in final loss 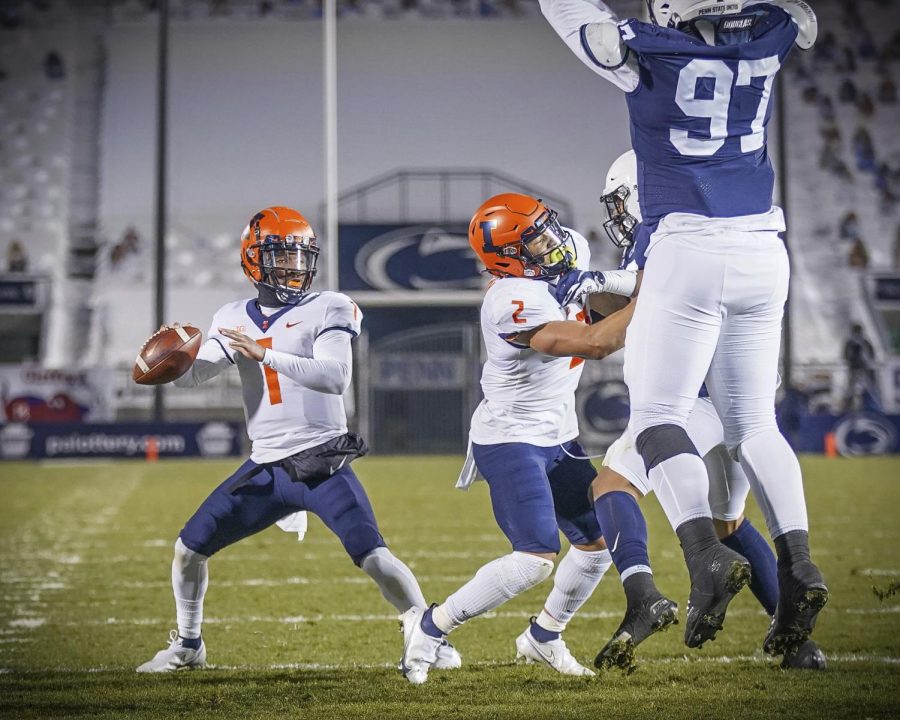 Quarterback Isaiah Williams throws a pass during the game against Penn State on Saturday. The Illini lost the game 56-21.

The conclusion of the Illinois football season had little expectations. An interim head coach, a redshirt freshman starting quarterback, a depleted roster, and having to face a team on a three-game win streak. Even then, the final game of Illinois’ season left the taste in your mouth that this team could be and should be better than how they play on the field.

The Illinois football team put up 21 points in the first 10 minutes of their contest against Penn State but failed to score for the last 50 as Penn State rolled over Illinois 56-21. After netting 199 total yards in the first quarter, Illinois ended the game with 273 total net yards in a match where a lack of offensive production and defensive execution coupled for an all-around bad showing.

Illinois finished the regular season 2-6, with its only two wins coming against Rutgers and Nebraska, teams at the bottom of the Big Ten.

This next year will offer a lot of questions for the Illini football team dealing with current players, recruits, and coaches but whatever the outcome is, Illinois will certainly be stepping in a new direction.

Welcome to the Bielema era

Last Sunday, following a 28-10 loss to Illinois’ in-state opponent Northwestern, Athletic Director Josh Whitman decided it was time for Illinois to part ways with head coach Lovie Smith. On Saturday morning before the Penn State game, Illini nation was introduced to their coach of the future, Bret Bielema.

Bielema has a substantial amount of Big Ten experience, playing at Iowa from 1989-92 and serving as the head coach at Wisconsin from 2006-12 where he went to three straight Rose Bowls. Bielema, a defensive-minded coach, will no doubt look to establish an Illinois defense that is at least more consistent than the defense was under Smith.

Another scoring drought for the Illini

After the game, Williams talked about the adjustments Penn State made to make it hard for the offense. Penn State started bringing more pressure making it difficult for plays to develop and rushing what the offense wanted to do.

One common theme about all these games was, offensively, the Illini started well in every contest. It seems like in each game though, the offense hit a wall where they could not keep up any form of consistency and if you can’t score, you can’t win.

With the exception of an interception on Illinois’ first drive of the game, the offense was rolling early. Isaiah Williams led the Illini to three straight touchdowns in the second, third and fourth drives of the game. The Illini scored quickly in all these drives, capitalizing on big plays and never keeping the offense on the field for more than two minutes. Illinois did it through the ground and through the air with a huge 64-yard run from Williams, a touchdown run from Chase Brown and two touchdown passes by Williams, one for 38 yards and the score to Daniel Barker and the second one a five-yard touchdown to Brian Hightower.

After those three scores in the first quarter, Illinois was shut out the rest of the game, going scoreless for the final 51 minutes of the contest. The team couldn’t put drives together settling for seven three-and-outs through the game and punting a total of 10 times.

Williams cooled down considerably through the end of the game as the Illini just didn’t see much offensive production. The lack of an established run game made it hard to move the ball causing the frequent three-and-outs and which was only exemplified with the lack of an Illinois passing attack.

Rod Smith switched up the quarterbacks multiple times giving Peters a few chances (0-4 on passing attempts) before returning back to Williams and ending the game with Deuce Spann who rushed for a single yard. Ultimately there was just not a lot that happened after the first quarter.

Giving up 56 points to anyone is usually automatic grounds for a failing grade, however, the defense looked good in small instances throughout the game. For example, the Illini defense sacked the quarterback five times in the contest, they got a total of six tackles for loss and even forced a fumble that put the Illini in a perfect position to score.

On the flip side, Illinois could not stop the big plays. On the first play of the game, Penn State quarterback Sean Clifford hit Jahan Dotson on a comeback route where Dotson then beat Illini defensive back Devon Witherspoon’s tackle attempt to take the ball 75 yards to score. Penn State had two 70-plus yard passing scores and a kickoff return touchdown.

To be fair to the team, Illinois was out a lot of players due to injuries. The defense was stripped of a lot of their talent, but giving up 56 points makes it almost impossible to win.