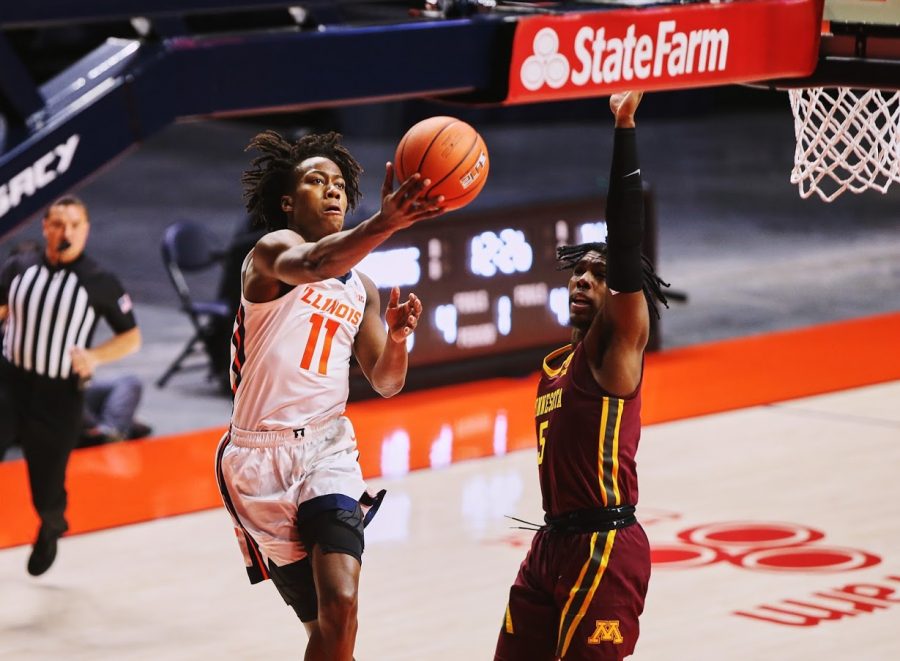 Junior Ayo Dosunmu goes for a layup during the game against Minnesota on Tuesday.

Illinois traveled to Rutgers on Sunday to play its first Big Ten road game of the season in hopes of adding another ranked win to the resume. Instead, a second-half burst from Ron Harper Jr. and a poor rebounding effort led to a 91-88 loss.

While it’s no doubt Rutgers is a top tier team, now sitting at 6-0, the Scarlet Knights averaged just 74.3 points in their last three contests and Brad Underwood’s squad was giving up just 71.3 points over its last three games. For an Illini team that prides itself on defensive strength, Sunday’s matchup proved there are still plenty of adjustments to be made.

The Illini star has one of the best season statlines in all of college basketball and that didn’t change with the loss. Dosunmu put up 22 points, 11 rebounds and six assists, his third double-double of the season. But, when Illinois needed him most today, the junior went cold.

Near the 8-minute mark of the second half, Harper started to catch fire, scoring 15 of his 28 points during that stretch. Dosunmu, however, struggled in the second half, missing a couple of pull-up jumpers and struggled to find an open lane to the hoop.

By the time he got going again — the final minutes of the game — Rutgers’ lead was a little too large to come back from. And like all of the Illini guards this season, Dosunmu struggled to take care of the ball, which led to four turnovers Sunday. It wouldn’t be a surprise to see Dosunmu regain his composure and go off against Penn State on Wednesday.

The freshman, who looked amazing in his debut back in November, has struggled since those first couple of games, but he looked his worst against Rutgers. Miller has scored a total of 13 points against the three ranked opponents Illinois has played thus far, failing to put up any points on three shot attempts Sunday. Miller played just 20 minutes at the RAC, his fewest minutes all season.

Because Miller had such a standout debut, it seems like expectations have been through the roof for Miller, and while he’s still experiencing growing pains as any freshman does, there needs to be some level of consistent production. Miller also struggled defensively today, tallying four fouls.

Frazier had a pretty difficult task walking into the RAC and that was to guard Jacob Young, who averaged 17.5 points over the last four games and had a little bit of a size advantage over Frazier. But, the Illini senior struggled to contain Young at all, giving up 24 points and four assists. However, the Illini defense didn’t do a great job of playing help defense off ball screens.

The senior’s offensive production, however, might’ve kept the Illini in the game, as Frazier put up 19 points, a season-high, on 60% shooting from the field. Frazier also had a season-high five assists, dishing a couple of nice passes to Cockburn in the paint. Frazier’s biggest struggle all season, however, has been turnovers, something he excelled in last season. The senior had four against Rutgers.

Williams, Illinois’ other elite defender, was also tasked with a tough matchup at the RAC. The senior mostly guarded Harper Jr., who shot 60% from field goal range and 62.5% from the three. Williams also got into foul trouble, ultimately fouling out in the final minutes, and was called for a flagrant 1 which led to a six-point play.

However, Williams’ three-point shot was crucial on Sunday, as he was a perfect 4-for-4 from deep. His consistency has continued to give the Illini more power from behind the arc, especially with Miller struggling lately. Williams has been inconsistent on the boards this season and that was exposed against Rutgers as he only grabbed two rebounds.

The Illini center came out of the gates strong, giving Rutgers’ center Clifford Omoruyi problems all throughout the first half, finishing the first 20 minutes with eight points and eight rebounds. But, the second half was a different story.

While Cockburn still looked good in the first few minutes of the second half, Myles Johnson began to slow him down, outworking Cockburn in the paint. The sophomore still struggles to be strong with his hands and come down with the rebound, despite being the biggest guy on the floor. Cockburn let Johnson and company grab too many offensive rebounds in the second half, contributing to the mid-half run from the Scarlet Knights.

Cockburn finished the day with another double-double — 17 points and 12 rebounds — but it felt like one of his worst performances this season because of the second half.

The backup center or forward also struggled on the glass against Rutgers, grabbing just four rebounds on Sunday. Bezhanishvili, like Cockburn, couldn’t outwork the Scarlet Knights in the paint in the second half, failing to secure a rebound for the last 13 minutes.

Bezhanishvili, however, has looked more consistent on offense this season, finding his touch around the rim again. The junior finished with 11 points, making five of his seven shot attempts.

Like Miller, Curbelo looked like a freshman against the Scarlet Knights. While he continued to show his flashy passes, especially to Bezhanishvili, his defensive woes held him back. Curbelo doesn’t play the most disciplined defense and that was exposed, as he fouled out around the middle of the second half, having played just 16 minutes.

Curbelo did end the game with five assists, and it’s obvious he makes the offense more dynamic when he’s on the court. I’m guessing he’ll play a cleaner game at Penn State.