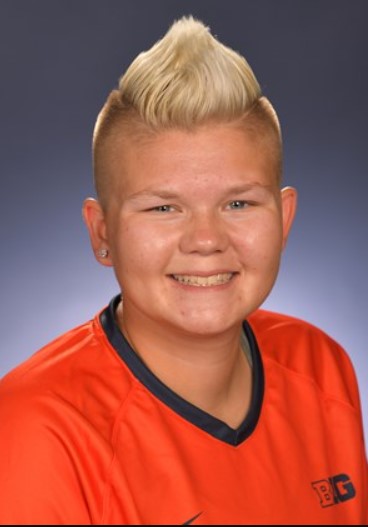 Redshirt sophomore Peyton Willie poses for a headshot. Willie is looking forward to competing after a long recovery from injury.

Two years and four surgeries later, redshirt sophomore and forward Peyton Willie has been cleared to play and is gearing up for the spring season. Although she’s been out for a while, it hasn’t stopped her from being involved with the Illinois soccer team.

After Willie’s freshman season, she started to have really bad shin splints. It was treated, but as time went on, she had developed horrible pain in her feet to a point where she couldn’t even walk without being in pain. Turns out she had plantar fasciitis and needed surgery to fix it.

“Basically what happened is my first two surgeries they went in and cut an inch out of each of the arches of my feet, so my arches could drop to release all the pain in my feet,” Willie said.

Willie thought the surgery fixed her pain and that she was able to get back to playing, however, that wasn’t the case. The surgery didn’t actually help at all and after being reevaluated, it was found that her calves were so tight, which was causing the pain in her feet and surgery again for a gastroc release.

What got Willie through her surgeries was knowing they were going to help relieve her pain and get her back on the field. She realized she needed to have a positive mindset in order to get her through the recovery process.

With soccer being her life and something she loves a lot, it was hard to take in that she wasn’t going to be able to play her sophomore season.

Willie described her recovery process as a “two steps forward and one step back.” which led to a lot of frustration. However, mental strength and her teammates’ support pushed her through it.

“I went from no jumping and then instantly single and double leg jumps and my shin splints came back,” Willie said.” So then we had to completely take out jumping again and I couldn’t run until I could jump.”

With running in the picture, Willie knew she was close to being fully 100%, but without being able to do the steps to get to run, it was a huge setback.

Regardless of setbacks, she still tried to contribute to the team without being able to play with her teammates.

“I would go shag balls, we’d do a shooting drill and I know I couldn’t participate and I knew that if I could shag the balls for my teammates then they can get more reps in,” Willie said.

Although Willie is a forward, she would help with the goalkeepers in anything they needed. Whether it be throwing balls, communicating with them, or being there to help if she could.

One thing Willie helped with the most was the heart rate monitors.

“My new nickname was ‘PeyPey Pods’ because I always pick up the pods. Every day after practice I would pick up the pods and the heart rate monitors even though I wasn’t actually wearing one myself,” Willie said.

Head coach Janet Rayfield said the goal when one of their players gets injured is to make sure they stay engaged with the team.

“Continuing to ask questions, involve her in any way that’s possible whether that be team video sessions, stay involved in practice, and I think that’s one of the things Peyton (Willie) has done exceptionally well is to continue to stay connected to her teammates,” Coach Rayfield said.

With the fall season delayed to spring, it gave Willie more time for recovery in hopes to be cleared come February. The end goal being to lace up her cleats and get on the field, it motivated her a lot from her last surgery in May of this year.

After a long recovery, all the rehab worked off as she made an appearance in the last game of the Friday Night Light series last month.

“It was crazy, the first half I played 15 minutes and I swear I was flying like a chicken with its head cut off. I had no idea what I was doing,” Wille said. “I was playing with people I had never played soccer with before because I got hurt my freshman year. So even the sophomores I was playing with I was like ‘Oh my gosh, I’ve never played with you guys before’ so it was kind of cool.”

Getting cleared to play, Willie has to focus on restrengthening the muscles she has lost in her hamstrings, quads and calves.

As the spring season approaches Willie is looking forward to playing Big Ten soccer again along with the traveling trips and the memories that come with it.

Coach Rayfield said she hopes to see Willie return to the fierce competitor with a great goal-scoring ability.