Illinois rallies from slow start to down Penn State 98-81 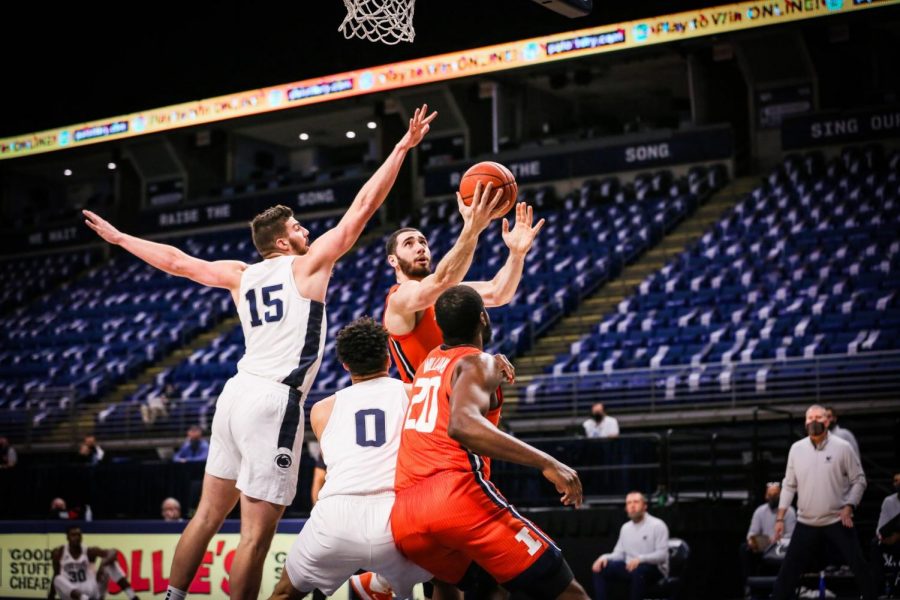 After allowing a season-high 94 points to Rutgers on Sunday, Illinois’ defense looked nearly as bad in the first half on Wednesday. The Nittany Lions were able to convert on their first nine possessions of the game. Back-to-back threes from Myreon Jones and Myles Dread forced Brad Underwood to take a timeout, with his team trailing 19-4.

But the veteran coach was not fazed. He relayed a simple message to his team.

“They’re not gonna make them all,” he told his team.

From there, Illinois started to chip away, eventually regaining the lead and keeping it, to go on to a 98-81 victory against Penn State Wednesday evening.

The defense wasn’t ideal, ultimately allowing 24 more points in the first half, but the offense woke up. Illinois started to feed Kofi Cockburn inside, and Penn State had no answer. Cockburn found his spots on the low block and continued to work inside. He showed vastly improved touch around the rim, finishing the half 8-8 for 16 points.

Both teams cooled off offensively in the second half, and it appeared the teams were headed for a late-game thriller. But Illinois asserted its will. Ayo Dosunmu knocked down two free throws to put Illinois ahead 56-54. He then drove into the paint and found Trent Frazier for a wing three to put them up five. Frazier got another open look on the ensuing possession. He missed but Cockburn was there to clean it up for an and-one, putting Illinois up seven.

After being outrebounded, 15-10 on the offensive glass on Sunday, Illinois did a much better job of winning the 50/50 balls and making hustle plays. A big energy boost came from junior transfer Jacob Grandison. The Holy Cross transplant came into the contest averaging under eight minutes per game, but he brought the spark that Illinois was looking for. Grandison scored seven points and grabbed seven rebounds (four offensive) in 15 minutes of play.

“Coach was preaching to us about effort plays and how the game rewards effort,” Grandison said. “I buckled down and ate what he told me. And I was able to come out and give everything I got. And I did and I’m tired now.”

Penn State was able to linger around. They were 16-34 from the field in the second half, scoring one point per possession for the entire game. But Illinois’ offense was just too much as Dosunmu took over late. After a pedestrian first half for him, he got going down the stretch. He found teammates for open looks and got to the rim for baskets, finishing with 30 points, six rebounds, five assists. Performances like this have become standard for the Chicago native, so much so that his teammates are accustomed to it.

“I didn’t see anything special or different about Ayo tonight. He was just Ayo,” Grandison said. “That’s my teammate Ayo doing his thing. It wasn’t his day, in particular, it was just Ayo being Ayo.”

Illinois offensive outburst was able to mitigate its defensive struggles. After allowing 65.3 points per game last season, Illinois is allowing 80.1 points per game this season. Underwood acknowledges they have things to work on in that department, but he also attributes some of that to playing at a faster pace.

The win bumps Illinois to 2-1 in conference play and completes a stretch of five of six games away from home.