Illinois will look to veterans to bounce back against Penn State 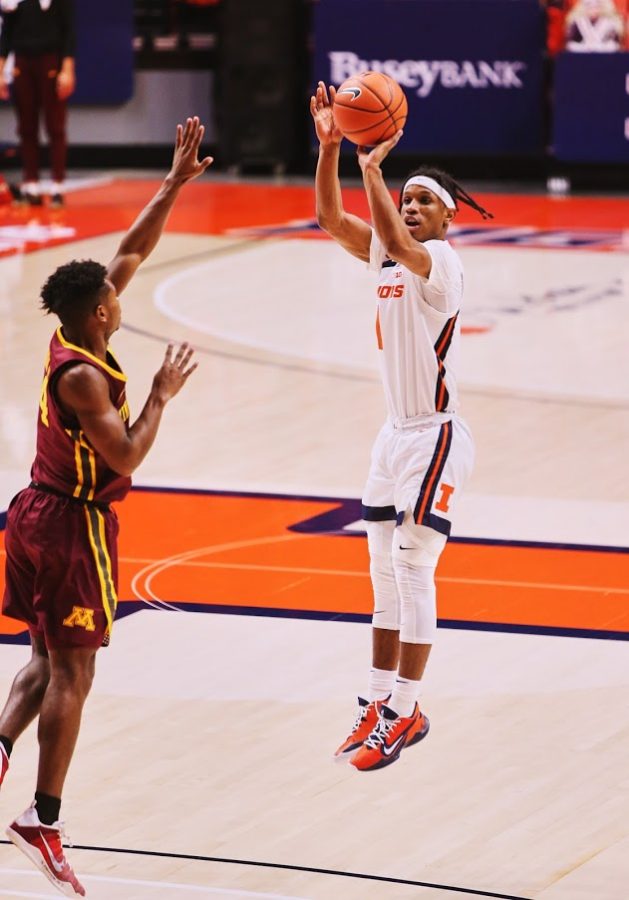 Senior Trent Frazier shoots the ball during the game against Minnesota on Dec. 15.

Early in senior Trent Frazier’s career, losing was the norm for Illinois. The Illini were under .500 in each of his first two seasons, suffering four losing streaks of four games or more.

Last season, the switch flipped for the Illini. They finished well above.500, aided by the fact that they were 5-4 in games coming off of losses. One of those losses coming without star guard Ayo Dosunmu.

This season, Illinois has responded to each of its two losses with arguably its best performances of the season: a 15-point win at a ranked Duke team and a 27-point thrashing of Minnesota. Those performances bring the question, what has flipped for Illinois these past two years to have the ability to respond so well to losing? Aside from the obvious roster transformation, Frazier credits the older guys on the team and their leadership.

“As vets, we got together after Rutgers and we have to hold ourselves accountable,” Frazier said. “I’ve talked about it these past few days with Ayo and Da’Monte, talking about us being sound and not making mistakes and holding ourselves accountable so we can be sound on the defensive end.”

For head coach Brad Underwood, losing is not at the forefront of what he wants to see happen. However, he likes how his team has responded to each of the losses so far. With high expectations, he knows every opponent that faces Illinois will want to knock them out of the rankings.

“It can’t be lose and we get all riled up again,” Underwood said. “We’re not the hunters anymore. We’re being the ones hunted. We’re everyone’s Fourth of July. We’re everyone’s New Years day celebration. Teams are excited to play us.”

Wednesday night will be another opportunity for an unranked team to take down Illinois when Underwood’s squad travels to take on a scrappy Penn State group. The Nittany Lions are just 3-2, but their losses came in overtime to Seton Hall, and they took Michigan to the wire in Ann Arbor before losing by four. They demolished a previously ranked Virginia Tech team in Blacksburg.

In previous years, Penn State was anchored by strong frontcourt play from Lamar Stevens and Mike Watkins. With those two gone, the Nittany Lions are playing much smaller and faster. They’re third in the Big Ten at 27.3 threes attempted per game.

“They’re playing much smaller than they have in the past, four guards, similar to us,” Underwood said. “They’re pressing. Something they have not done in the past.”

Illinois has hopes of winning the Big Ten outright. To do so, they’ll need to continue to rebound from losses. That starts in practice and Underwood was encouraged with the energy from his group on Monday.

“Fantastic. As you would expect it to be when you have veterans with a lot of pride,” Underwood said. “Unbelievable guys. I wouldn’t trade our guys for any team in the country.”

Wednesday’s game at Penn State is scheduled for a 6:00 p.m. central time tip-off. The game can be watched on the Big Ten Network.