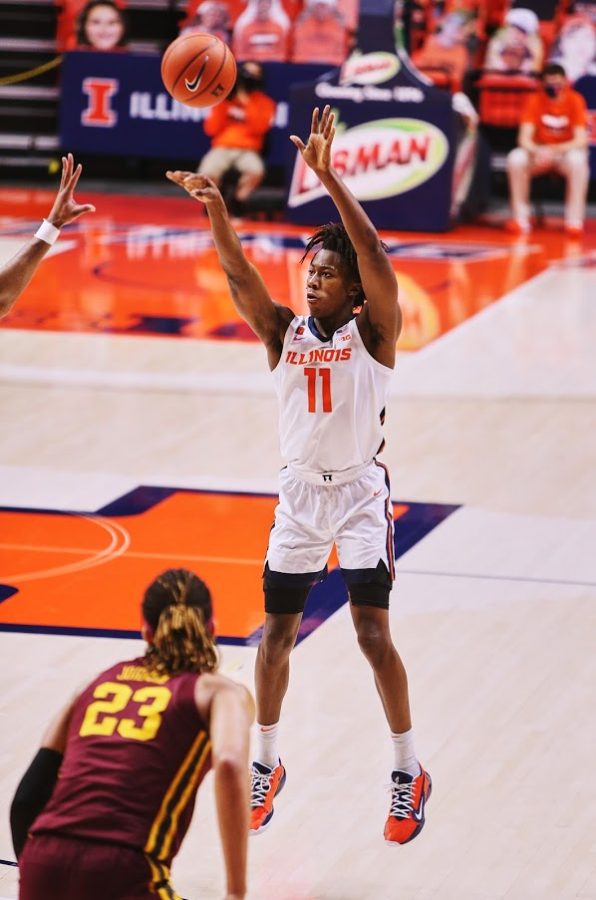 Junior Ayo Dosunmu shoots the ball during the game against Minnesota on Dec. 15. The Illini earned a road win against Penn State on Wednesday with a 98-81 score line.

The Illini are back on track.

After falling on the road to Rutgers on Sunday, Illinois erased an early 15-point deficit and defeated Penn State in State College 98-81. Despite struggling with turnovers, free throws and fouls so far this season, the team looked much improved in all three areas on Wednesday, though defensive struggles continue to be an issue moving forward. Let’s take a deeper look at eight Illini players following the team’s second Big Ten win of the season.

After another 30+-point performance, his second in the last four games, Dosunmu continues to prove why he’s one of the best players in all of college basketball this year. The Chicago native put up 30 points, including 21 in the second half, six rebounds and five assists.

Dosunmu continues to struggle with turnovers, averaging 3.3 per game thus far, including four tonight, an increase of 0.6 from last season. If the Illini want to hang with the other Big Ten favorites this year, they are going to need Dosunmu to improve his ball security going forward.

Fouls also continue to plague Dosunmu, including controversially receiving a double technical, and a subsequent ejection, in the game’s final minute, though he also had four prior to the play. As one of the team’s clutchest shooters late in the game (as seen countless times last year), the Illini need him on the court for almost the full 40 minutes without needing to worry about foul trouble, especially against better Big Ten opposition.

If Dosunmu is forced to sit out against Indiana because of the ejection, he will certainly be a huge loss for the Illini

The Illini center came out firing on all cylinders to open the game and was one of the main reasons the team got back into the game after Penn State’s hot shooting start. Cockburn finished with 23 points, though only seven came in the second half, and six rebounds and continues to benefit from the craftiness of freshman Andre Curbelo in the paint, a trend Illini fans can hope continues moving forward.

After struggling with foul trouble against Baylor, Duke and Missouri, Cockburn seems to have gotten things under control over the past two games, finishing with only one foul across each of the two matches. Like Dosunmu, the Illini need Cockburn out of foul trouble with the game on the line when they face the likes of Iowa, Wisconsin and Michigan State, or really any Big Ten team for that matter.

Cockburn still needs to work on being strong with his hands, though this was certainly one of his best outings of the season thus far.

As one of the best and most reliable defenders on the team, Williams is usually tasked with guarding the opposition’s best player. That didn’t change on Wednesday, but the Illini just couldn’t get stops, especially early in the first half. It’s not all his fault for the team’s struggles, but as a player used mainly for his defensive abilities, he’s going to take some flak for it.

Despite these struggles, Williams continued to show that he isn’t solely a defensive player, adding three points in the win, though it was a surprise he didn’t get any looks from behind the arc after going 100% from deep against Rutgers. If Williams can find his form from three, he will continue to cause problems for opposing defenses, but you can’t score if you don’t shoot.

Williams also needs to improve his consistency on the boards, as he only grabbed two rebounds for the third time in four games.

Like Williams, his early shakiness on the defensive end of the court was one of the factors behind a big Illini deficit after the first few minutes of the first half. Frazier, however, was able to contribute a bit more on the offensive side of the floor, collecting seven points, four points and four rebounds over 38 minutes of action.

One of the most impressive parts of Frazier’s game is his willingness to put his body on the line and draw charge calls in the paint, though he struggles with accumulating personal fouls of his own. The Florida native finished the game with three fouls, the fourth straight game in which he ended with three or more fouls.

After struggling with turnovers on Sunday at Rutgers, Frazier didn’t turn the ball over once against Penn State. The Illini will need him to continue this trend moving forward, especially with better competition coming up in the next few weeks.

Where is the Adam Miller from the first three games of the season or from the Minnesota game? After getting off to a hot start to his collegiate career, Miller appeared to have secured his spot in Brad Underwood’s starting lineup, but after another subpar performance, Miller might see his minutes reduced, and possibly his starting spot vanish going forward.

Miller is most dangerous when he takes a corner three; once he gets hot, there’s no stopping him. But what happens if he never gets hot? That’s what happened again against Penn State, as the Chicago native finished with just five points, including one three-pointer, though he shot just 25% from beyond the arc.

The freshman’s defense was all over the place all game, constantly getting caught flat-footed against a dangerous and efficient Penn State offense. While credit must be given to the Nittany Lions for making numerous tough shots against the Illini, Miller needs to step up on defense, especially with his offensive struggles.

It’s easy to see why Illini fans are so excited about Curbelo’s future in Champaign, and the freshman once again proved why he’s one of the team’s most reliable offensive players, racking up 15 points and eight rebounds against the Nittany Lions.

Curbelo was one of the biggest sparks behind the Illini’s first-half comeback after trailing by as many as 15, feeding Cockburn in the lane for easy buckets in the paint.

Despite only being a freshman, Curbelo has some of the best vision in all of college basketball, finding gaps and holes all over the court even when no one seems to be open. If he stays at Illinois for a few years, he has the potential to become one of the best guards in program history.

Despite coming off the bench and kickstarting the offense game in and game out, Curbelo sometimes forces unnecessary, difficult plays, forcing tough shots and turnovers. This trend continued against the Nittany Lions, though the confidence he has in himself as a freshman is promising going forward.

Giorgi Bezhanishvili: C-
Though he only played 12 minutes, Bezhanishvili scored eight points and grabbed three boards. But the junior center proved to be a liability on the defensive end of the floor, constantly getting caught out of position, creating large gaps and easy buckets for Penn State.

I know he only had one foul and one turnover, but Bezhanishvili shouldn’t need to rely on Cockburn getting into foul trouble to see significant minutes. After a solid offensive outing, Bezhanishvili desperately needs to improve on defense if he wants to see his playing time increase.

Wednesday’s game was easily the Holy Cross transfer’s best game since arriving in Champaign, finishing with seven points and seven rebounds while also shooting 100% from the field. Grabbing four offensive rebounds, all of which came in the second half, was huge, as they directly led to several second-chance opportunities for the Illini, including four of his seven points.

If Grandison can continue to be productive on the offensive and defensive ends of the court, he will certainly see more playing time, especially given Miller’s recent struggles.