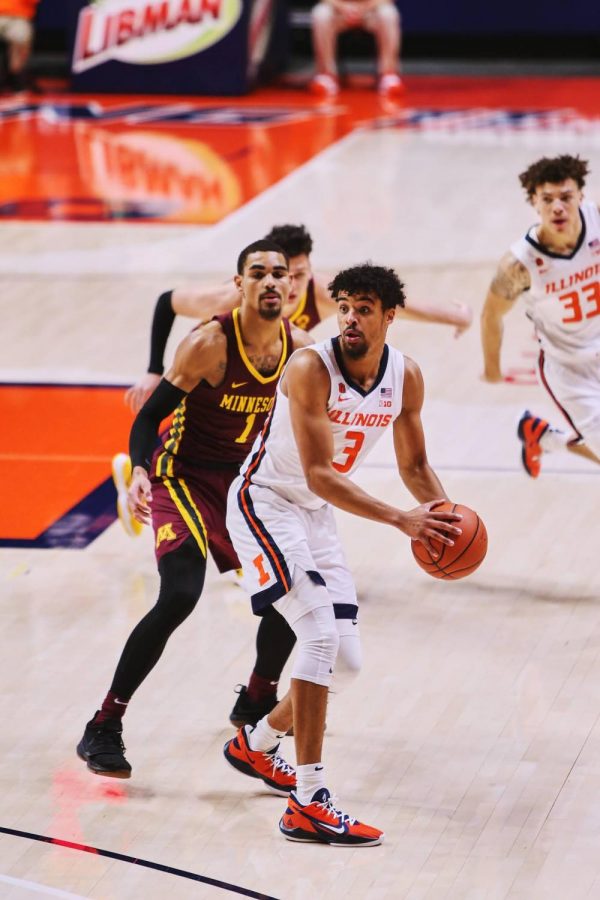 Jacob Grandison looks to pass the ball in Illinois’ game against Minnesota on Dec. 15. Grandison’s playing time increased against Penn State because of his physicality and hustle plays.

After a 91-88 loss to Rutgers on Sunday, Illinois head coach Brad Underwood was looking for more effort. His team was outworked and outhustled by the Scarlet Knights.

Junior forward Jacob Grandison was looking for a way to get more playing time. The Holy Cross transfer saw just three minutes of action at Rutgers.

Those two interests met at an intersection on Wednesday night. Grandison provided the spark and effort Underwood desired, playing 15 minutes and giving Illinois a lift to help them come back from a 15-point deficit.

“Jacob’s a good player. We need him,” Underwood said. “Hopefully this will springboard him out his slow start.”

Grandison’s start to his Illinois career was anything but smooth. As soon as the competition level rose, his playing time started to decrease. In the six-game stretch from Ohio to Rutgers, Grandison played under four minutes per game. Underwood cited fouling and defense as the reasons Grandison was not seeing more time. Veterans Da’Monte Williams and Giorgi Bezhanishvili saw the majority of the minutes at the four. Grandison was also behind freshman Coleman Hawkins.

This was a stark change for Grandison. He started 50 of his 64 games there and played 34.6 minutes per game as a sophomore. A younger, immature, player may have been discouraged by a lack of opportunity and role change. But those are not words used to describe Grandison He didn’t pout. Rather, he took it in stride and worked harder.

“My path to get here was not pretty at all,” Grandison said. “A little blip relative to my story wasn’t going to faze me. All it did was make my practice harder and make me better. I think I’m playing a lot better in practice than I was. Turning negatives into positives.”

At practice on Monday after the Rutgers game, Underwood’s message to his team was clear: make effort and hustle plays. After losing Andres Feliz and Alan Griffin in the offseason, Underwood’s roster lacked the guy to make those plays. He challenged Grandison in particular.

Grandison entered Wednesday night’s contest and looked like a transformed player. He was flying all over the court, snagging seven rebounds, four on the offensive end. Grandison recorded two offensive rebounds the previous eight games.

With over 12 minutes remaining in the second half, freshman Andre Curbelo drove into the paint and attempted a fadeaway jumper. Grandison watched from the left corner, before bolting into the paint. He leaped for the ball and while he couldn’t grasp it, he was able to deflect the ball. He tipped it into the hands of Kofi Cockburn who finished a layup, bringing the Illini bench to their feet.

“It was one of those moments when people talk about a game of inches,” Grandison said. “I could have not went, but I went, got a finger on it. Kofi got it and the game rewarded my effort. It’s simple.”

Underwood’s search for a hustle player and more consistent minutes at the four may be over. Grandison has flashed the offensive skill set that made him special at Holy Cross. He’s 4-7 from deep on the season. He leads the team in box plus/minus and has the second-highest offensive rating on the team. But it’s rebounds and defense that will get him on the floor.

Illinois desperately needs someone to make those winning plays and Grandison showed he’s capable of that. Underwood couldn’t hold back a smile when discussing how far the junior has come.

“I couldn’t be happier for that young man,” Underwood said.