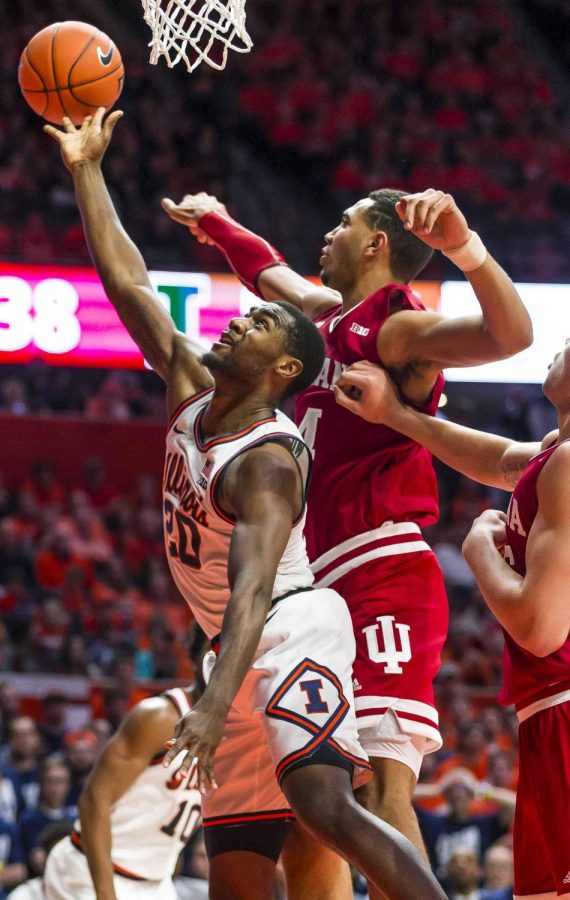 Da’Monte Williams goes up for the layup contested by Trayce Jackson-Davis in Illinois’ meeting with Indiana last season on March 1. The Illini face the Hoosiers Saturday afternoon.

After its first Big Ten win of the season, No. 18 Illinois is looking to win two straight games for the first time since November 27. The team standing in their way? The Indiana Hoosiers.

Indiana (5-3) has power five wins over Butler, Providence, and Stanford. They have quality losses to No. 10 Texas and they took No. 21 Florida State to overtime. A home loss against Northwestern on Wednesday is their biggest blemish.

The Hoosiers are led by sophomore Trayce Jackson-Davis, who has taken the year two leap many expected. He’s up to 21 points per game (on 56% shooting), 8.6 rebounds and 2 blocks. Head coach Brad Underwood is aware of the challenge the lefty presents.

“I think he’s one of the most efficient players in the country,” Underwood said. “He’s drawing a ton of fouls. They’re running offense through him. He does it on the block. He does it away from the basket. They run a lot of dribble hand-offs through him.”

Limiting fouls will be one of the keys for the Illini on Saturday. They committed over 25 fouls per game in the Missouri, Minnesota, and Rutgers contests. But against Penn State, they limited the Nittany Lions to just seven free throw attempts. Unlike Penn State, Indiana is a team that gets to the free throw line often. They’re third in the conference in free throws attempted at 24.4 per game.

“I think we were better in a lot of areas,” Underwood said. “We were less handsy. We had a couple (plays) where we bodied up on drives…I thought we were better at understanding guarding the ball, not fouling.”

The Hoosiers are one of the better defensive teams in the country. They rank 11th in defensive efficiency, per Ken Pom. They are anchored by Jackson-Davis, but next to him in the frontcourt is 6-foot-8 sophomore forward Race Thompson. The combination of two traditional bigs is something Illinois has not seen a ton of this season and will be an interesting matchup when contrasted with 6-foot-3 Da’Monte Williams at the four.

This could be a good matchup for either Jacob Grandison or Giorgi Bezhanishvilli, who would provide more size at the power forward spot.

“We’ve got to be solid in our post defense,” Underwood said. “They do a lot of cross screening action. They do a lot to try and get Trayce the ball. It’s an emphasis of their best players are interior guys and we’ve seen a lot of guard-oriented stuff to this point.”

Illinois beat Indiana by one in their sole matchup last season. This is a rivalry game that has created some memorable moments. From Illinois guard Chester Frazier bumping Indiana guard Eric Gordon in pregame introductions to Tyler Griffey sinking a buzzer-beater layup to beat then-No. 1 Indiana in 2013. With both programs expected to make the tournament this season, fans could be in for another chapter in this rivalry.

Tip-off is scheduled for 3 p.m. Central Time and the game can be watched on FS1.