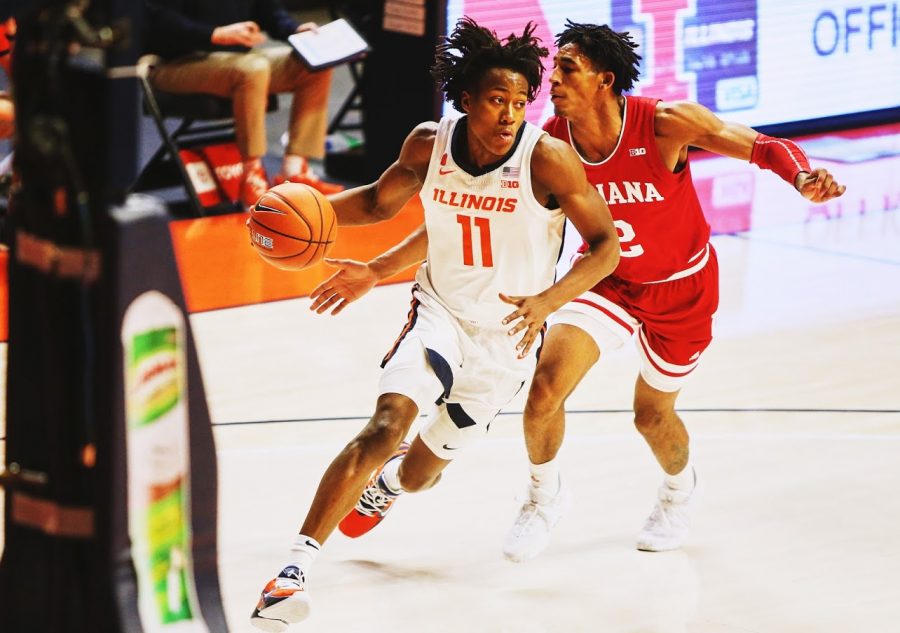 Junior Ayo Dosunmu speeds towards the basket during the game against Indiana on Saturday. The Illini won the game 69-60 with Dosunmu scoring 30 points.

There’s nothing quite like watching Ayo Dosunmu torch Big Ten defenses down the stretch with the game on the line. Illini fans got quite the show on Saturday when Dosunmu put up 30 points and secured an Illinois victory over Indiana.

In accordance with Dosunmu’s offensive burst in the late second half, the inside defense kept Indiana’s top guy Trayce Jackson-Davis from turning the game around. The Illini might have come out flat in the first 20 minutes, but the second half highlighted the type of team Illinois really is.

Back-to-back 30-point performances will always be an impressive feat, but doing it against two Big Ten teams on the back end of a three-game slate in a seven-day span truly encompasses Dosunmu’s talents. The junior’s 30 points don’t even tell the full story of his impact on Saturday afternoon, rather the 18 points in the final nine minutes of the game to push Illinois past Indiana.

Dosunmu had a solid 10 points at the half, but his hot streak from three-point range late in the game was the Illini’s saving grace. While he was a little quiet on the boards, Dosunmu made up for it with a team-high five assists, tying Curbelo.

Dosunmu is now averaging 24.1 points per game, ranking third in the country right behind Big Ten opponents Marcus Carr (24.6 ppg) and Luka Garza (28.8 ppg). Dosunmu’s junior season is shaping out to be his best one yet by a mile and has him contending for a Player of the Year award.

Since the Illini’s debut weekend back in November, Miller has struggled to find a rhythm, though he still remains in the starting lineup. That continued against the Hoosiers as Miller went 0-for-4, with all of his attempts coming from the three, his most dominant asset. This was Miller’s second shutout of the season, as he also failed to score in the team’s loss to Rutgers.

But in the postgame press conference, head coach Brad Underwood said Miller is still playing “great” and will be “electric” as he continues to grow in the Big Ten.

Miller only played six minutes in the second half, but Underwood attributed that to the team “getting comfortable with the guys we had on the court.” It is way too early to panic about Miller, as a player with his ability and work ethic will find a way to still contribute and adjust to the new level of play soon.

Frazier’s last two seasons have brought a lot of inconsistency on the offensive end despite being one of the top scorers early in his career. Saturday night was one of those down moments for the senior, as he went 0-for-5, missing four three-pointers. However, Frazier did score four points off free throws — something Underwood was proud of since his team has struggled with that facet.

But what saves Frazier time and time again is his stellar defense. In the first half, Frazier was guarding Al Durham and held him scoreless on three shot attempts with no rebounds or assists. The senior also grabbed a season-high six rebounds, all on the defensive end.

Williams once again came alive from three when Illinois needed a spark. Early in the first half, the Illini were struggling to get any shot to fall, particularly the deep ball. Down 15-9, Williams hit a three to make it a one-possession game. Then, on the last possession of the first half, Williams nailed another one from deep to give Illinois a two-point lead heading into halftime.

The senior finished the night with eight total points, but Williams’ defensive contributions mattered more. Guarding Race Thompson for most of the night, Williams held the 6-foot-8 forward to four points when he usually scores in the double digits.

Williams has continued to prove his worth on both sides of the ball, and his veteran leadership has given Underwood a reliable basketball mind to turn to in times of struggle. Come tournament time, those consistent threes will be an immeasurable asset for the Illini.

After a quieter first half on the offensive end, Cockburn flipped a switch in the last 20 minutes, finishing Saturday’s game with his sixth double-double of the season with 15 points and 15 rebounds.

But the most crucial part of Cockburn’s game against the Hoosiers was holding Jackson-Davis to a season-low 11 points on 3-for-13 shooting, with just three points coming in the second half. Prior to Saturday’s game, Jackson-Davis was averaging 21 points on 56% shooting.

Cockburn has simply looked more comfortable in the last few games, leading to more success in the paint on both sides of the ball. Cockburn had just two fouls and two turnovers against the Hoosiers after consistently having three or four fouls and turnovers a game through the first seven games. The Illini big has also been slowly improving at catching Curbelo’s nifty passes.

Curbelo did Curbelo things again against Indiana, using his unique skill set to drop low-post passes to Bezhanishvili and Cockburn and dish transition assists to Dosunmu. With another five assists, Curbelo leads the Big Ten with 6.8 assists per Big Ten game.

However, the freshman forced some sloppy layups late in the first half, going 2-for-6 with five points and two turnovers. He did make up for it on the defensive end, forcing a team-high three steals. Underwood noted in the press conference he has seen steady improvement in Curbelo’s defense, as his communication on Saturday was more noticeable.

Along with Cockburn, Bezhanishvili helped limit the Hoosiers to 24 points in the paint and just five second-chance points. Bezhanishvili played alongside Cockburn for a good part of the second half, and the two worked to out-rebound the Hoosiers 21-15 in the final 20 minutes.

Bezhanishvili has played much more disciplined lately, making all three shot attempts and his lone free throw attempt to finish with seven points while only committing one turnover. The junior’s defense was steady as well, finishing with no fouls and three rebounds. Bezhanishvili also brings a positive and poised energy to the Illini, which noticeably rubs off on his teammates.