Confidence, preparation: How Ayo Dosunmu has established himself as top closer in college basketball 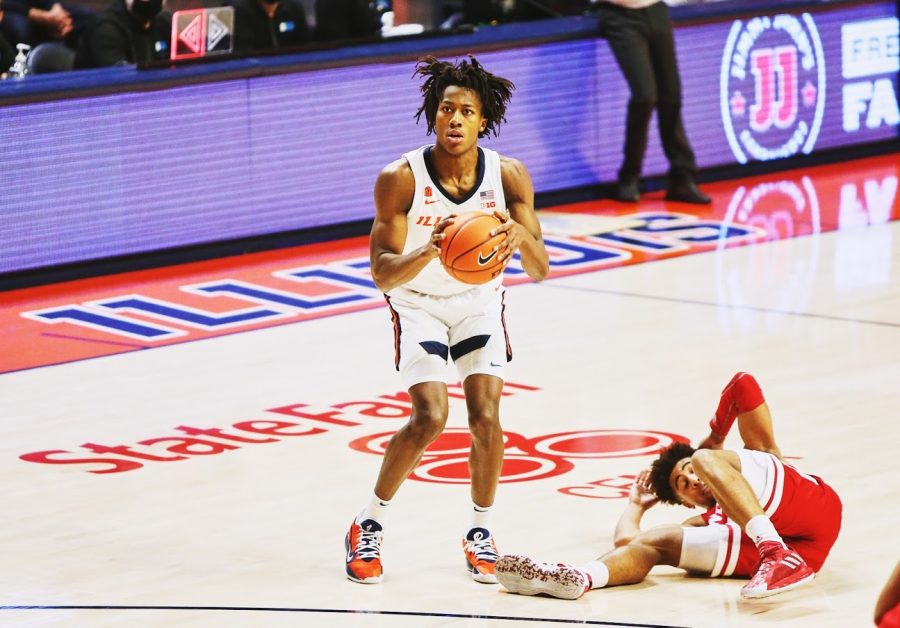 Junior Ayo Dosunmu prepares to shoot the ball during the game against Indiana on Saturday.

With under 10 minutes remaining, No. 18 Illinois was on the verge of being upset at home, trailing Indiana 47-43. Illini star guard Ayo Dosunmu had played a solid game up to that point but had only 12 points on nine shots.

Head coach Brad Underwood knew he needed more from his captain, who typically shines in late-game situations, and relayed a simple message to him.

“Be the best player on the court,” Underwood told Dosunmu. “Do what you do.”

From there, the Chicago native took over. He scored five of Illinois’ seven points to give his team the lead back. But he wasn’t done. He poured in a flurry of baskets, from all three levels, propelling his team to victory. Dosunmu chalked up 18 points in the final nine and a half minutes to finish the day with 30 points.

After reading Indiana’s ball-screen coverage for most of the game, Dosunmu knew what he needed to do to score. Indiana’s defense had become accustomed to Dosunmu passing to the corner shooter, so Hoosier big man Trayce Jackson-Davis would show on the screen before sprinting back to the paint. Dosunmu recognized this. That recognition and the time he spent studying Indiana on film prepared him to seize the opportunity.

“That’s when I was able to get in there and get a floater off,” Dosunmu said. “I got another layup and got some easy transition threes. Basically just playing a mind game with ‘em. I watch a lot of film. A lot of film on them.”

Dosunmu could have that takeover mindset all game if he wanted, but that’s not his prerogative. He chooses to get his teammates involved early and create easy buckets for them, like NBA stars “Luka (Doncic) and Lebron (James),” he says. That certainly reflects in his numbers as Dosunmu is averaging 4.3 more points in the second half.

When Dosunmu committed to Illinois back in 2017, the fanbase was obviously excited. He was the highest-rated Illini signee since Meyers Leonard in 2010. But his freshman year was filled with growing pains. Underwood vividly remembers an early December contest where his then-freshman guard struggled to make layups. Dosunmu went 1-9 that game as the Illini lost by 10 to Ohio State.

Most freshmen would get discouraged, but not Dosunmu who used games like that to fuel himself to work harder.

“I knew Ayo was a hard-rockin ‘dude,” Underwood said. “Instead of that bothering him, that dude never flinched. His mindset is so tough and it was like ‘okay I had a bad game. How do I get better?’ And it’s continued.”

On the court, Dosunmu carries himself with a swagger. He has confidence, but he’s not cocky. He tries to mirror the mindset of one of his basketball idols, the late Kobe Bryant. Off the court, it’s hard-pressed to find Dosunmu discussing his greatness. When asked about his dominance, he often cites his teammates first. His teammates, however, are not afraid to hold back when talking about their leader.

“Nobody can guard him,” Kofi Cockburn said. “He knows that whenever he feels like it, he can take over.”

In the loaded Big Ten conference, there will be plenty of close games. Dosunmu already made waves as a late-game savant after hitting big shots against Michigan and Wisconsin last season. He added another chapter to that book on Sunday with his heroics against the Hoosiers.

With Dosunmu and his “mamba mentality” at the forefront, the Illini are in a good position to succeed when games tighten up.