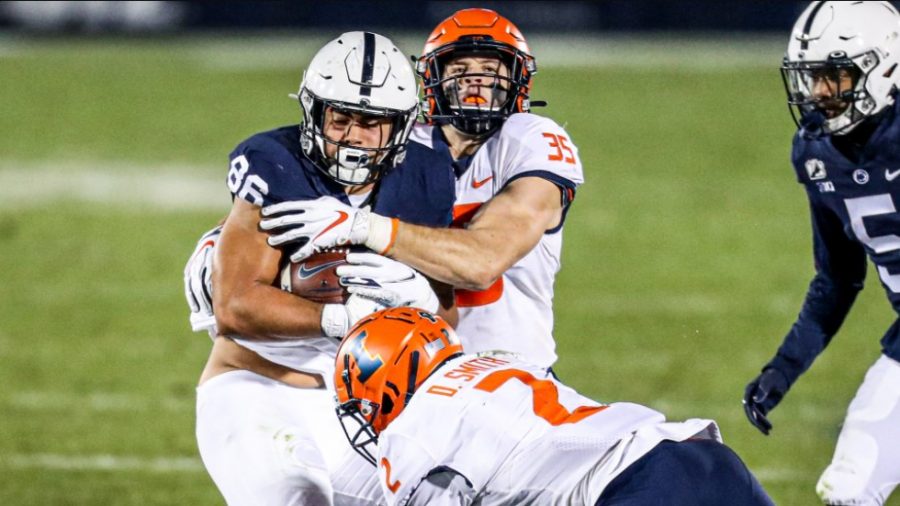 Senior Jake Hansen wraps up an opposing player during competion.

After five seasons in Champaign, senior linebacker Jake Hansen is moving on and will enter his name in the 2021 NFL draft. One of the best defensive players on the Illini in the program, Hansen has left a lasting impact on the college football world that may potentially see him on an NFL roster next year. The Florida native has been with the program through some ups and a lot of downs, so let’s take a look at some of his brightest moments since first donning the orange and blue.

After sophomore Tre Watson was forced to sit out the first half, Hansen, who played mostly on special teams and had yet to make a start on the defensive side of the ball, stepped in to make the first start of his collegiate career in his eighth game as an Illini.

Though he only made three total tackles leading up to the game, the then-freshman had a solid debut, making two tackles in the 40-17 Homecoming loss. Two tackles isn’t mind-boggling, but it was a step forward for Hansen and opened the door to his dominance on defense. Hansen ended up playing in all 12 games that season, finishing the year with eight tackles, though 75% of them were assisted.

After suffering a season-ending injury during preseason training camp in 2017, Hansen impressed head coach Lovie Smith and earned a starting linebacker spot in 2018. Eager to make an impact in his second-ever start, Hansen knew he had to play well in the season opener against Kent State, but few people could’ve predicted him to make such an instant impact.

Hansen made 15 total tackles, with six going for a loss, a feat that tied the single-game program record and tied the record as the Big Ten’s seventh-most in conference history.

The redshirt sophomore would eventually start all 12 games at linebacker in 2018, racking up 95 tackles, including three games with double-digit tackles, one sack, one forced fumble and one fumble recovery.

Perhaps Hansen’s most important performance came against the undefeated Wisconsin Badgers on Homecoming, a game in which the Illini entered as 30.5-point underdogs. Looking to snap a four-game skid, Illinois needed big performances from its most reliable players to pull off the unthinkable.

Hansen forced two fumbles in the 24-23 upset win, both of which led to Illinois touchdowns, while he also made 11 total tackles. After a strip-sack by Hansen on quarterback Jack Coan in the first half led to a 48-yard Donny Navarro touchdown to cut the Illini’s deficit to just three, the Florida native stripped running back Jonathan Taylor with the Badgers looking to put the game out of reach in the fourth quarter. Three plays later, Brandon Peters would connect with Josh Imatorbhebhe for a 29-yard score to reduce the lead to just two. The Illini would eventually win the game on a last-gasp James McCourt field goal, and Hansen was named Walter Camp National Defensive Player of the Week and Big Ten Defensive Player of the Week.

After missing the final four games of the season due to injury, Hansen finished the season with 72 tackles, 3.5 sacks and one interception. Hansen’s seven forced fumbles were the most in all of college football, while his three fumble recoveries were the sixth-best in the nation.

Though the 2020 season certainly didn’t live up to any Illini fan’s expectations, Hansen still put together a very impressive campaign. In the team’s first win of the season on the road at Rutgers, the redshirt senior tied his career-high with 15 tackles, while he also recorded a sack and an interception.

After starting all eight games, Hansen was named to the All-Big Ten Second Team by the media and to the All-Big Ten Third Team by Big Ten coaches. In his final season in Champaign, Hansen finished tied for the second-most forced fumbles in the Big Ten (two), tied for fourth in fumble recoveries (two) and eighth in tackles (36).

As one of the quintessential pieces of the “Lovieball” era, Hansen leaves Illinois as one of the program’s best defensive players, finishing his Illini career with 235 tackles, seven sacks, 10 forced fumbles, six fumble recoveries and three interceptions.