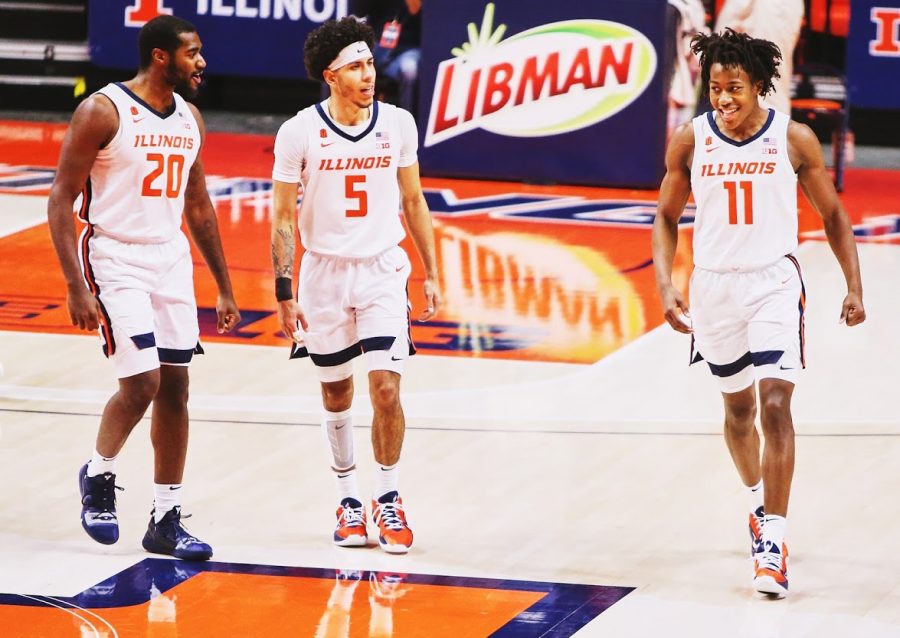 Members of the Illinois basketball team walk on the court between plays during the game against Minnesota on Dec. 26.

After a month of basketball, Illinois sits at 7-3 and in a good spot to make a serious run in the Big Ten. I dove into the mailbag to answer some of the reader’s most pressing questions.

Which team will give Illinois the most trouble within the next two weeks and why? – Zain B.

After playing one of the toughest schedules in the country in the first month of the season, Illinois’ schedule finally eases up. Their schedule in the next two weeks looks like this: Purdue, at Northwestern, Maryland, at Nebraska. Bart Torvik projects Illinois as a favorite in all four games.

Northwestern is the game with the closest projected spread, but I haven’t fully bought into the Wildcats yet, and I think Illinois will handle them. The team that would scare me the most is Purdue. The Boilermakers have been up-and-down this year, but they are the highest-rated team in Ken Pom of the four. Purdue has a balanced attack with some intriguing guards, and they have the size to slow down Kofi Cockburn with 6’9 Trevion William and 7’4 Zach Edey. Matt Painter is arguably the best coach in the conference and coming off of a loss, I expect him to have his Boilermakers ready.

It’s no secret that the freshman guard has struggled as of late. Since conference play started, he’s just 5-18 from three. Teams have figured out Miller is a spot-up shooter, and they’re running him off the three-point line. He’s taken only nine rim attempts in ten games per Synergy, making just four of them. Taking only 1.1 free throws per game is an alarmingly low number.

If teams aren’t going to let Miller shoot, he needs to find other ways to contribute. Whether that is as a defensive stopper or as a plus facilitator, Miller has to find something. He currently has the worst box plus/minus of rotation players at +0.2.

At the end of the day, Miller is still a freshman. He’s figuring out the college game and Brad Underwood has emphasized that he’s made improvements. He’s a streaky shooter, who on the right day can look hard to stop.

Do you think Andre Curbelo will ever start over Adam Miller or Trent Frazier, or does Underwood like Curbelo’s spark off the bench?

This is harder to answer as I don’t know exactly what Underwood is thinking. When asked about it, he gives vague answers. I think the whole starting vs. non-starting thing is a bit overrated, and it’s more important to see who plays more. Curbelo off the bench does provide a boost whenever he checks in. Since conference games started, Curbelo has played 3.7 more minutes per game. We’ll see if Curbelo eventually starts, but if he plays more minutes then I don’t think it matters that much.

Do you see the Illini being elite if they get even mild offensive production from Frazier and Miller? – Zak H.

Illinois is fifth in offensive efficiency in the country even with a bit of inconsistent shooting from the two lefty guards. So I don’t think the offense is necessarily what’s holding them back from being elite. In their three losses, the Illini are allowing 84.6 points per game. When Miller and Frazier are hitting shots, it takes the team to another level. But defensively they’ll have to step up if they want to compete with the nation’s elite.

Are the Illini going to adjust offensive schemes throughout this season or are they going to continue handing the ball off on the perimeter?

Underwood’s three-guard motion offense, highlighted by dribble handoffs, has been quite successful this year as Illinois’ offense ranks in the top of several categories. Certain matchups will require Illinois to play bigger upfront, but it’s rare to not see three of Miller, Frazier, Curbelo and Ayo Dosunmu on the court at once. I don’t see much changing on offense.

Is the Big Ten the best conference in basketball? Why or why not? – Riley G.

Which conference is the best in college basketball and why is it the Big Ten? – Deron. B

I had a feeling this question would pop up after I sent this tweet out.

They should just designate spots 15-25 in the AP rankings for the Big Ten.

There’s no elite teams. All resumes are flawed. But, a lot of pretty decent ones who can beat each other on the right night.

Apologies to Deron, but I believe the Big 12 is pretty clearly the best conference. The definition of “best” can vary, but for me, it’s the conference that can send the most teams to the Final Four. The Big Ten will definitely get more teams in the NCAA Tournament. Anywhere from 8-10 teams seems possible.

But, the top of the Big 12 is significantly better. They have four teams in the AP top nine. Five teams in the AP top 13. That’s half of the league. No. 2 Baylor and No.3 Kansas have looked like serious title contenders. No. 7 Texas won the Maui Invitational and No. 9 West Virginia is the only team to really challenge Gonzaga thus far.

Meanwhile, the top of the Big Ten has been exposed. Wisconsin has losses to two unranked teams. Iowa lost at home to then unranked Minnesota. The Hawkeyes are No. 91 in defensive efficiency, which is not a recipe for success. Illinois has no bad losses, but failing to win contests against Baylor, Rutgers, and Missouri is not promising. Given the strength of the top of the Big 12, I think their league should be considered better. But if your definition of better is deeper, then by all means, it’s the Big Ten.